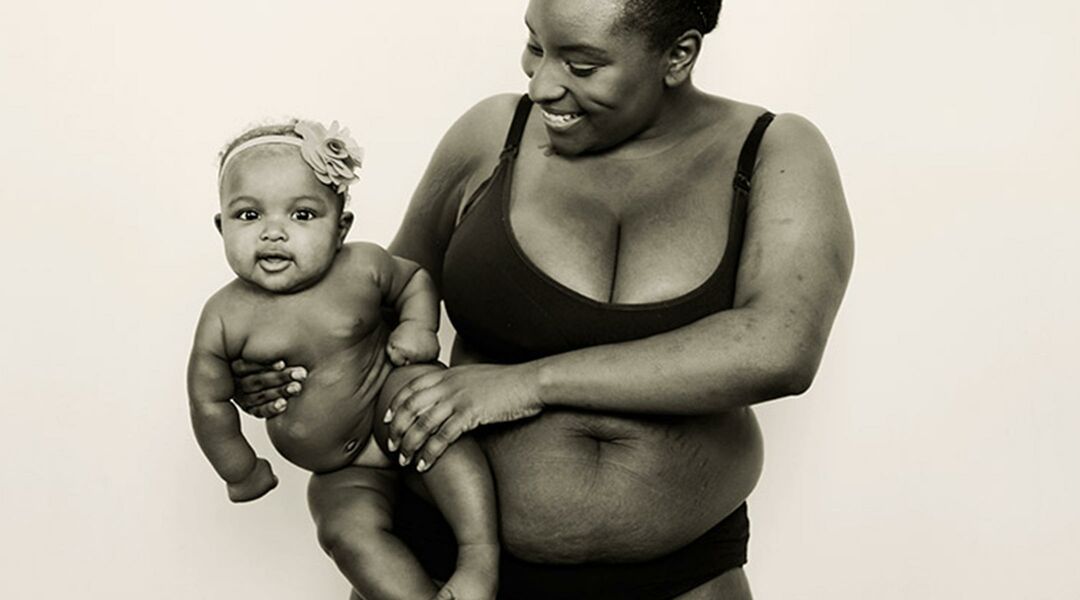 The project, which was born out of Wells’s difficult pregnancy experience, has been a labor of love. A long way from its humble beginnings as a Facebook page, the compilation is now available in book form.

Here, some of the amazing women who got in front of the camera to share their honest experiences from pregnancy and labor to motherhood.

Her story: As a teen mom struggling with anxiety and depression, Tiana is doing everything in her power to put her daughter first. During pregnancy, that meant fighting through a preterm labor scare to carry her baby past her due date. And now, that means going back to school.

Her story: Chrissy admits: before pregnancy, she didn’t understand why moms thought they had it so hard. Now, she has a new baby and a newfound appreciation for the moms in her life.

Her story: Emily says her second birth—a VBAC (vaginal birth after caesarean)—was actually easier on her postpartum, likely because this time around she knew to seek help for postpartum depression.

Her story: After being induced with her first baby, Maverick, Caitlin hoped for a spontaneous labor the second time around. Her wish was granted, but Lincoln arrived with an unexpected cleft lip. His corrective surgery was successful, but left Caitlin with a lot of anxiety. Her advice to other moms? Never be afraid to seek help.

Her story: Mahesha didn’t think she could have a child because of her partner’s infertility issues. But a few months into their relationship, they were overjoyed to learn they were pregnant. The cherry on top: Mahesha had an empowering home birth.

Her story: Rachel became a single mom during pregnancy and didn’t feel ready to be a parent at all. But now that Ayla’s here, the pair is getting along just fine.

Her story: After four pregnancies, Davie’s experiencies run the gamut. She was a teenager when her first son was born. Not knowing her options, she had an epidural and vaginal birth. After a placental abruption, her second baby was born via emergency c-section. He was born very sick, and taken off life support at 4 days old. Baby no. 3? Another c-section. But her fourth, a girl, was born in an incredible two-push VBAC delivery.

Her story: Amber worries about “bouncing back” after baby because of her job in the Air Force. She says she weighs less than she did pre-pregnancy, but that her body is “different.” Still, she says she wears her stretch marks proudly.

Her story: Carly’s 22-hour labor ultimately ended with a c-section. While she spent months feeling like her body failed her, she credits breastfeeding as her saving grace.

Her story: Carly’s 22-hour labor ultimately ended with a c-section. While she spent months feeling like her body failed her, she credits breastfeeding as her saving grace.

Her story: This Air Force vet has experienced three pregnancies (Austin is her third), the second plagued with prenatal depression. She was able to treat her depression with safe meds this time around.

Her story: Aubree’s first pregnancy with son Vance, now 3, was anything but easy. Preeclampsia and two failed epidurals meant an unplanned natural birth. Her labor with baby Von? Smooth sailing.

Her story: Aubree’s first pregnancy with son Vance, now 3, was anything but easy. Preeclampsia and two failed epidurals meant an unplanned natural birth. Her labor with baby Von? Smooth sailing.

Her story: Because of blot clot concerns, Toi’s husband needed to administer daily shots to her during pregnancy. She didn’t create a birth plan and just went with the flow: three epidurals and an ultimate c-section.

Her story: After a miscarriage, MaryEllen proudly holds her ‘rainbow baby.’ Born at 36 weeks, Aaron spent some time in the NICU learning to keep his temperature up.

Her story: This mom of four suffered mulitple miscarriages and even lost a twin during her last pregnancy. She pushed for a homebirth for the surviving twin, and was even able to live-stream it.

Her story: After a stillbirth, Sandra was terrified when she got pregnant again two years later. But the support of her health care providers offered her the reassurance she needed to safely deliver Ava via c-section.

Her story: Brittany credits her positive natural birth experience to the Bradley Method. Her breastfeeding journey was a bit more difficult because of Ryder’s lip tie, but it was corrected early on.

Her story: Aimee has PCOS and experienced endometriosis, and was told she’d never get pregnant without hormone therapy. But after a few weeks of not feeling well, she learned she was 9 weeks along. She had trouble gaining weight during pregnancy (only 15 pounds total) but had a healthy delivery.

Her story: Kim lost her eldest, Emma, to SIDS at 8 months old. Her four subsequent pregnancies were smooth homebirths. Then Zachary, pictured, came along. He wasn’t breathing; a midwife had to perform CPR for 9 minutes to resuscitate him. Now, he’s alive and well (and adorable).

Her story: Clomid, an IUI, hypertension and placenta previa were just part of Shawn’s pregnancy journey. But when her daugher, Palmer, came home on her twelfth wedding anniverary, it was all worth it.

Her story: As a preemie herself and a NICU nurse, Catherine was determined to have full-term babies. Her first son, Taylor, was born at 37 weeks and needed to be transfered to the NICU. But after seeking out a birthing center and midwives, her second baby, Andrew, was born healthy at 39 weeks.

Her story: Even though Jennifer’s OB was the doctor she’d been seeing since age 17, she found her birthing experience and unwanted c-section traumatizing. Now, thanks to breastfeeding, she says she has a great relationship with baby Cara.

Her story:  Hyperemesis Gravidarum (severe morning sickness) forced Kym to stop working at 11 weeks. She spent most of her pregnancy on bed rest. She and Wesley struggled with breastfeeding, but stuck with it until they both had it down.

Her story: With babies born just 11 months apart, Jennifer opted for two different birthing facilities. Epidural and all, she deems the second experience better than the first.

Her story: After an induction that needed two and a half days to take, Julia had the vaginal birth she’d hoped for. But she didn’t initially have the breastfeeding experience she’d hoped for. A support group was able to change that.

Her story: Carolyn didn’t think she’d be able to conceive quickly because of her weight. And when she did, she came to her doctor with a list of all the risk factors she thought she’d face. But her fears were unfounded; her pregnany with Violet was smooth, along with her vaginal delivery.

Her story: While Bria was excited about her unplanned pregnancy, she suffered from prenatal and postnatal depression. But the whole experience — including an unmedicated water birth — has made her stronger.

Ashlee, with Nova, 5 months postpartum (the photographer herself!)

Her story:“This project was born out of a general experience, but also of the very personal and difficult story of myself,” Jackson, the project’s founder, tells The Bump. “It didn’t feel right to ask other women to share something so bold and brave and beautiful without doing it myeslf.”

Ashlee gave birth to her first son, Xavier, at 28 weeks, forced to abandon her homebirth plan for a 36-minute hospital birth. After 46 days in the NICU, Xavier came home healthy and breastfed through age 3.

The second time around, Ashlee learned she was expecting twins on the morning of her wedding. But her joy was cut short two weeks later when her girls were diagnosed with Twin to Twin Transfusion Syndrome (TTTS). The babies were delivered via emergency c-section at 24 weeks.