Eager to eat sushi? Have sex? Sip a cocktail? Get the scoop on when you’ll be able to get back to it post-birth.
ByLiz Callahan Schnabolk
UpdatedAug 2020 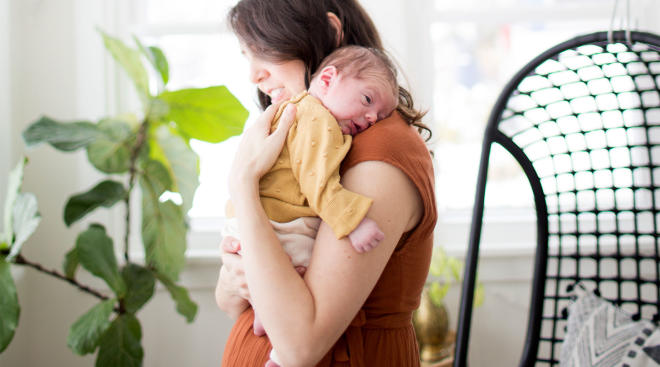 Photo: Krista Reynolds
We have included third party products to help you navigate and enjoy life’s biggest moments. Purchases made through links on this page may earn us a commission.

You’ve of course been anxiously awaiting baby’s arrival, but let’s be honest, you’ve also been craving a salmon roll, a glass of Sauvignon Blanc and your normal workout routine. The good news? “Restrictions in pregnancy are almost entirely related to preterm birth risk, so virtually all of these go away after delivery!” says Margaret Dow, MD, an ob-gyn with the Mayo Clinic in Rochester, Minnesota. Plus, things you’re told to avoid immediately after childbirth are usually given the all clear by the time your six-week checkup rolls around. Wondering what exactly you’ll be able to do after birth and when? Here’s the lowdown, straight from the experts.

When Can You Hold Your Baby?

Right away. Moms who deliver vaginally and have an uncomplicated birth usually get to hold their babies within minutes, even seconds! “Immediate skin-to-skin contact helps to promote bonding and breastfeeding, and can even help a baby transition to life outside the womb,” explains Janna Mudd, MD, an ob-gyn with Mercy Medical Center in Baltimore, Maryland. Post-birth newborn procedures like checking baby’s vital signs, giving the vitamin K injection and applying eye ointment can be done while baby is on top of mom, so there’s no need to interrupt those newborn snuggles.

“The only reason a baby would not go skin-to-skin on a mom’s chest after a vaginal delivery would be if there are any complications associated with the delivery,” says Sherry A. Ross, MD, a Santa Monica, California-based women’s health expert and author of She-ology and She-ology: The She-quel, Let’s Continue the Conversation. “If baby needs to be closely followed by the neonatal team after delivery, baby may need to be accessed by the resuscitation team to make sure they’re thriving after the delivery.”

So what if you have a cesarean delivery? “It may be difficult to have skin-to-skin contact due to positioning on the operating table,” Mudd says, “but attempts can be made to accomplish it.”

When Can You Eat Sushi?

As soon as you want! (Yay!) “You can order some rolls immediately after delivery if you’ve been wanting to eat raw fish,” says Ross. Consuming raw fish is a-okay while you’re breastfeeding, but nursing moms should be careful to avoid eating fish that’s high in mercury, adds Deedra Franke, RN, IBCLC, a lactation consultant at Mercy Medical Center in Baltimore, Maryland. (Salmon, shrimp and whitefish are good low-mercury choices.)

When Can You Drink Coffee?

Within hours. Really craving a cup of java? You can probably have one with your post-delivery meal. If you’re breastfeeding, “the amount of caffeine that gets into breast milk is small,” Dow says, although she notes that some babies seem to show “a little jitteriness” if they get a taste of it. If you’re worried, time your coffee break so it’s right after you nurse rather than right before.

When Can You Go Home?

After one to four nights. The standard for a vaginal birth is a two-night stay in the hospital, but you’re probably okay to leave after one night if you want. “The pediatricians need 25 hours to watch baby, but after that you can go home,” says Allison Boester, MD, assistant professor of clinical obstetrics and gynecology at Weill Cornell Medical Center in New York City. “I really encourage moms to get out of the hospital as soon as they can and, if they’re ready, it’s safe to go home the day after delivery.” If you have a c-section, you may need more post-birth care, and the norm is three to four nights in the hospital.

When Can You Have Celebratory Champagne?

As soon as you want. Itching for a drink? The good news is you can have one right after baby is born, if you really wanted to. But for breastfeeding moms, “the timing of the drink is important,” Franke says. Like coffee, the best time to indulge is right after feeding baby. To avoid passing any alcohol to your little one through your breast milk, “you should wait two to three hours before nursing” after having a single drink. To be honest, whether you’re nursing or not, we doubt you’ll want a glass of bubbly right after birth—sleep and a burger might be more your speed. See how you feel.

When Can You Exercise?

Within one to six weeks. “Mothers who have vaginal deliveries can generally return to exercise sooner than those who have had c-sections,” says Mudd, “but both can do light exercise, such as walking, whenever they feel ready.” We’re talking light here—not strenuous exercises or high-impact aerobics. But walking and Kegel exercises are great ways to ease back into fitness and can offer some great benefits: Activity can promote better sleep, lower the risk of blood clots and boost your physical health and general wellbeing, Dow says. As long as everything is healing well, your doctor will likely clear you for all types of exercise at your six-week postpartum appointment.

When Can You Drive a Car?

Within one to six weeks. Women who are taking opioid pain medicines definitely shouldn’t drive, but other than that, it really depends on how your individual recovery is going. Especially if you had a c-section, Dow suggests trying this first: Sit in the car and practice moving your foot from the accelerator to the brake and turning to look over your shoulders several times. See if you can do that easily and without pain. Some women are able to do this several days after surgery, and for some it can be a few weeks. Women who had a vaginal delivery but experienced an extensive tear or an episiotomy may also need to keep away from the wheel for a little while, Dow adds.

When Can You Have Sex?

After six weeks. Doctors will tell you “nothing in the vagina for six weeks,” which translates to no tampons and no sex during that time. “A woman’s body is still healing regardless of the mode of delivery for at least six weeks,” Ross explains. That means you should wait until your doctor says gives you the green light at the six-week postpartum appointment before having sex again. If you haven’t healed well, your doctor may ask you to hold off longer.

Of course, when you’re medically cleared for sex and when you’re emotionally ready to have sex are two different things. “Fantasizing about the next time they have sex with their partner is usually not at the top of a woman’s postpartum wish list,” Ross says. Between the physical and hormonal changes a woman goes through during pregnancy and after childbirth, plus breastfeeding and the challenges of having a newborn, a lot of couples find that they’re not ready to jump back into the sack right away, and that’s okay. Go at your own pace.

When Can You Take Birth Control?

After six weeks. You don’t need it if you aren’t having sex! But when you’re getting ready to resume sexual activity, it’s important to start some form of birth control. Don’t—we repeat, don’t—just rely on breastfeeding as a form of contraception. “You might not have your period when you’re breastfeeding, but it’s not a good form of birth control,” Boester cautions. “You can still ovulate and get pregnant.” She generally suggests the pill, condoms or an IUD for new moms. (Opt for a progestin-only pill, which is less likely to affect your milk supply than combination pills.)

Margaret Dow, MD, is an ob-gyn with the Mayo Clinic in Rochester, Minnesota, with a particular interest in exercise, sleep, nutrition and pregnancy. She earned her medical degree from University of Nevada School of Medicine in 2004.

Janna Mudd, MD, is an ob-gyn with Hoffman and Associates, an all-female ob-gyn doctor group affiliated with Mercy Medical Center in Baltimore, Maryland. She earned her medical degree at Drexel University College of Medicine, Philadelphia. She is a junior fellow of the American College of Obstetricians and Gynecologists and a member of the American Medical Association Society for Obstetric Anesthesia and Perinatology.

Sherry A. Ross, MD, is an ob-gyn and women’s health expert at Providence Saint John’s Health Center in Santa Monica, California, and author of she-ology and she-ology, the she-quel: let’s continue the conversation.

Allison Boester, MD, is an ob-gyn and assistant professor of clinical obstetrics and gynecology at Weill Cornell Medical Center in New York City, where she has been on the faculty since 2005. Boester received her medical degree at the University of Maryland School Of Medicine.

Deedra Franke, RN, BSN, IBCLC, is a lactation specialist at Mercy Medical Center in Baltimore, Maryland, where she has worked since 2010. Franke has served as a certified lactation consultant since 1989 and earned her nursing degree from the University of Maryland School of Nursing in Baltimore in 1981.

The Best Postpartum Belly Wraps to Support Your Recovery