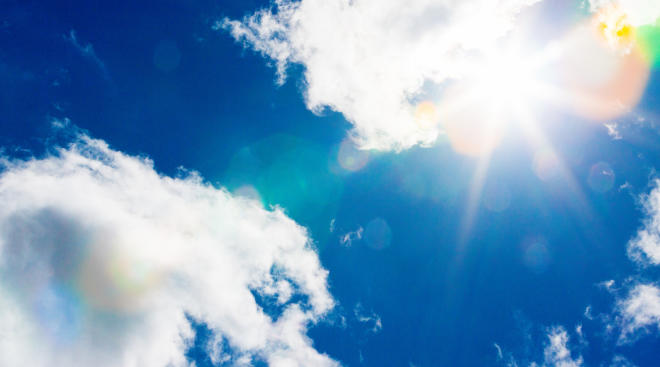 There you are, enjoying a warm, sunny day at the beach with your family when you suddenly notice that baby’s neck has a red rash all over it. In fact, the rash seems to be spreading as the day goes on and the heat of the day peaks. Welcome to heat rash. While it can be pretty uncomfortable for baby, the good news is it’s easy to treat and isn’t usually cause for concern. Read on to learn what heat rash looks like, how to get rid of it and how to avoid heat rash altogether.

The cause of heat rash is right there in its name: heat. Simply put, baby is a bit overheated, and his tender skin is sending out a warning signal. While it most commonly strikes during the warmer months of the year and in more humid, tropical climates (aka your summer beach vacation), the rash doesn’t only pop up in the summer—heat rash can rear its head when baby is just too bundled up for a trip to the mall.

While heat rash occurs in small children and adults alike, babies under 1 year old are most commonly affected. This is because the rash is primarily caused by blocked sweat glands—and infants’ sweat glands are smaller and still developing, leading to trapped perspiration under the skin, says Jennifer Trachtenberg, MD, a pediatrician and assistant clinical professor at the Icahn School of Medicine at Mount Sinai, in New York City. The bumps typically crop up in spots where heat and moisture can get trapped: the armpits, diaper area and skin folds of the neck and upper chest.

How to tell if it’s heat rash?

Most of the time, heat rash looks like lots of little red bumps, says Lauren Geller, MD, director of pediatric dermatology at Mount Sinai Hospital. Sometimes it can be itchy or create a prickly feeling and show up as blotches on various parts of the body.

There are three types of heat rash, although the differences just stem from how deep the affected sweat glands are in the skin.

Generally, heat rash is easily recognizable. Sometimes it looks a bit like eczema, but eczema tends to be much itchier, Geller says. Other illnesses that can cause a skin rash are often viral in nature (including the mosquito-borne Zika virus). These are also usually accompanied by other symptoms, such as a fever, a headache or listlessness, Trachtenberg says, but heat rash (thankfully!) is not.

How to treat baby’s heat rash?

To get rid of heat rash, you’ll need to cool baby down, Trachtenberg says. First, remove any excess clothing layers. Choosing light, loose-fitting cotton clothing whenever possible helps baby stay dry and cool—and is a good way to avoid heat rash altogether. This holds true even in winter: Too many tight layers can cause baby to overheat any time of year.

Once excess clothing is removed, place a cold compress on warm areas and then pat baby’s skin dry with a towel so moisture doesn’t get trapped. If you’re outside, head indoors to find relief in an air-conditioned room.

If baby’s been scratching at the rash, soothe the itch by applying a bit of topical calamine lotion. Just don’t overdo it with the lotion, Trachtenberg says, “because too many creams or lotions can further block the ducts.”

At night, keep baby from sweating while he sleeps by maintaining a cool sleep environment, whether it’s via an open window, fan or air-conditioner. The ideal sleeping temperature for baby is around 70 degrees.

The great thing about heat rash? It doesn’t last that long. Most of the time, heat rash goes away within a few days, if not much, much sooner. The faster you cool off your child, the faster the rash will dissipate.

You should contact your doctor if baby’s rash doesn’t get better—or if it gets worse—after a few days, Trachtenberg says. If it’s accompanied by a fever, crankiness or other unusual behavior, call your doctor.

What Causes Baby Eczema—and How to Treat It

Bummed Out! How to Treat and Prevent Diaper Rash