Breastfeeding & Alcohol: Is It Safe to Drink? 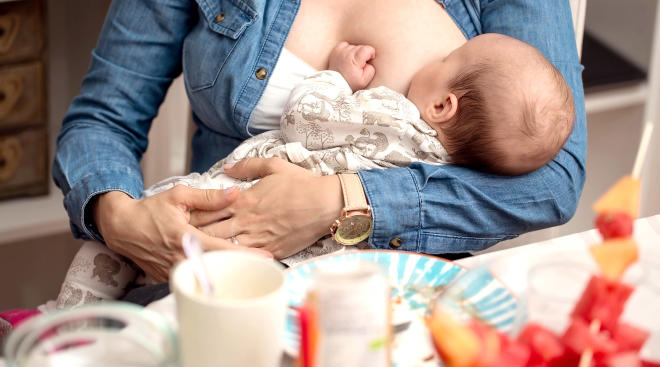 After nine months of growing a human being inside of you, you may want to raise a glass to motherhood. But after giving birth, are you ready to say “cheers” just yet? If you’ve decided to breastfeed, what you put inside your body can also affect baby, since it transfers through your breast milk. So it’s no surprise women often have a lot of questions when it comes to drinking alcohol while breastfeeding.

Can You Drink Alcohol While Breastfeeding?

This is the million dollar question. According to the American Academy of Pediatrics, breastfeeding women should avoid drinking alcohol habitually, but it offers up some tips on how to enjoy the occasional drink safely.

How Long After Drinking Can You Breastfeed?

If you are doing to enjoy a drink, the AAP recommends having it just after you nurse (or pump) and wait at least two hours per drink before your next nursing or pumping session. “That way, the body has as much time as possible to rid itself of the alcohol before the next feeding,” it says.

The discussion of timing often involves the old “pump and dump” method, where women pump after drinking and then dump the milk so baby isn’t exposed to any alcohol. But instead of wasting milk, doctors say to just wait before your next nursing or pumping session. Contrary to what you may have heard, alcohol can’t get “trapped” in your breast milk. Alcohol passes through your breast milk at the same rate it passes through your bloodstream. It peaks in breast milk anywhere from 30 to 60 minutes after you have one drink. Once you stop drinking, the alcohol level gradually falls as it leaves the breast milk and your bloodstream. You wouldn’t take blood out of your body to get rid of alcohol, so the same goes for breast milk.

How Much Alcohol Goes Into Breast Milk?

According to the La Leche League International, alcohol is present in a woman’s milk at the same level as in her blood. If you know what your blood alcohol level is after you’ve had a few drinks, then you also know how much alcohol is in your breast milk.

How Long Does Alcohol Stay in Breast Milk?

This answer is dependent on how much you weigh and how much alcohol you consumed. For example, it takes a 120-pound woman about two to three hours to get one alcoholic drink (like one beer or one glass of wine) out of her system. If you weigh more or have more than one drink, then adjust the wait time accordingly. Use our drinking and breastfeeding chart below to see where you fall in the mix. 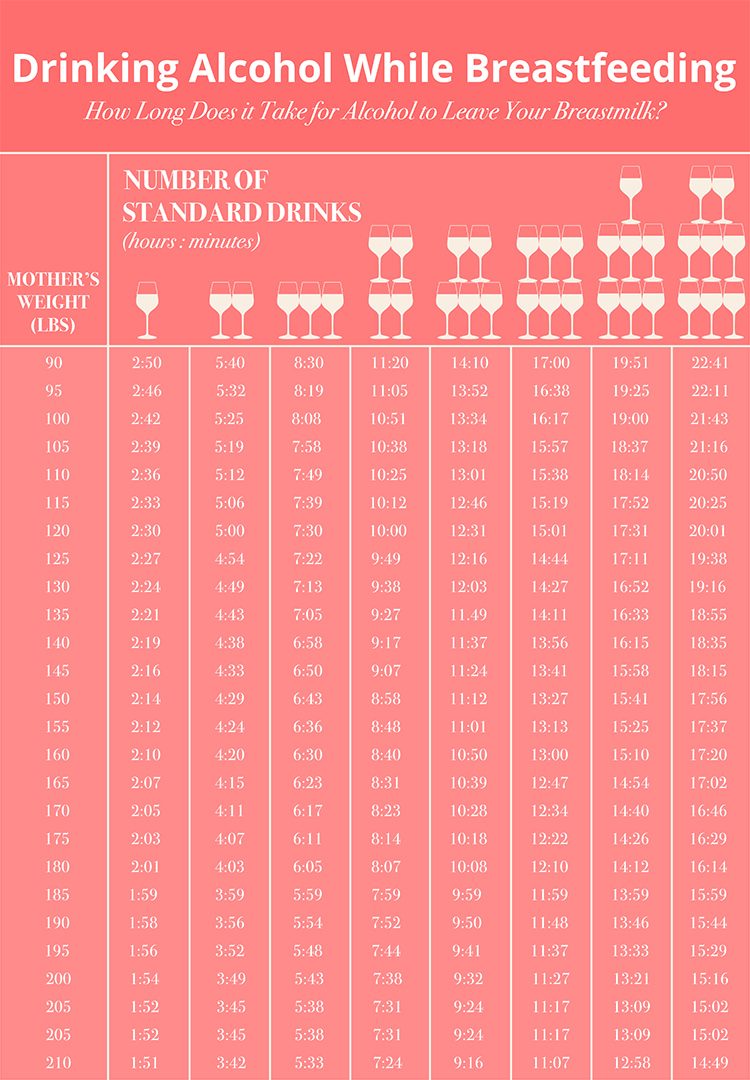 When you are drinking alcohol while breastfeeding, you need to approach a night out differently than you would if you weren’t breastfeeding. Take into consideration whether you will be grabbing a bite while you’re out. Your body absorbs alcohol through the stomach and small intestine, so it’s better to drink after eating.

And if you know baby is going to need to feed right when you get home, then you should plan your night and your drinks accordingly. You also need to take baby’s age into consideration. Newborns may nurse more frequently. This means that if baby is hungry, you may not have the luxury of waiting for the alcohol to clear out of your system in time to breastfeed.

Beer and Breastfeeding: Is There a Link to Increased Production?

Call it an old wives’ tale, but if you haven’t had the best breast milk production, you may have heard some people tell you to go have a beer. That’s because the yeast used to make beer is believed to stimulate prolactin, a hormone that helps women make more milk. Before you go out and buy a six-pack, it’s important to note that there are no studies to actually support this belief about beer and breastfeeding. But, there are studies to prove that alcohol actually inhibits milk production. So drinking beer while breastfeeding may not be the answer to producing more milk.

What is proven to produce more milk is emptying the breasts. Think of it as supply and demand. When baby is hungry and takes all the milk, your body knows it needs to make more. There are conditions that can make for some speed bumps. But doing things like staying hydrated and offering both breasts during feedings can help to boost your milk supply.

When it comes to drinking alcohol while breastfeeding, the choice is ultimately yours. If your worries outweigh your desire to have a drink, then perhaps it’s best to wait it out until you’re done breastfeeding.