A sociologist spent five years observing parenthood in wealthy western countries and concluded working moms in the US have it the worst.
save article 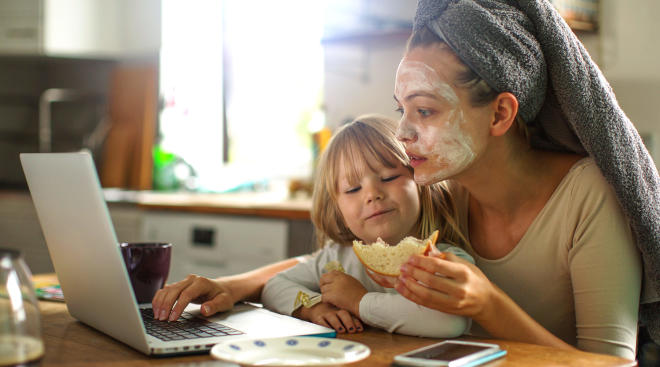 Women can have it all. Or at least that’s what we’re told until we become mothers and are forced to navigate the murky waters of a work-life balance. Spoiler alert: It’s nearly impossible.

Sociologist Caitlyn Collins is the topic of a recent article on Psychology Today. She spent five years observing parenthood in four wealthy western countries—Sweden, Germany, Italy and the US. Her conclusion? Guilt and worry are synonymous with working moms in the US. Collins shares her research in the book Making Motherhood Work: How Women Manage Careers and Caregiving, where she notes the work-life conflict many moms know all too well.

As Collins points out, motherhood looks different from nation to nation. In Sweden, known for its gender-equal policies, mothers assume they’ll receive support from partners, employers and the government. The former East Germany has a history of universal employment for men and women. Mothers here didn’t express worries about working, and felt they had enough support from policies and childcare. Even with that in place, moms there still put a limit on their work hours and career ambitions.

Part-time work is common for mothers in Western Germany and Italy, where the nations are built largely on the belief that kids should be raised by mothers. As a result, some women feel raising kids and working full-time don’t mix, and feel singled out if they want to pursue a career.

Ultimately, however, Collins found each of the regions has different policies in place to help mothers that virtually don’t exist in the US. As a result, working moms in America are drowning in stress.

Although improved policies are a step in the right direction, Collins says it alone won’t fix the problem. In order to do that, we need to better understand our cultural beliefs that shape gender equality, employment and motherhood.

What this means is we’re setting moms up for failure.

“I want American moms to stop blaming themselves,” Collins tells Psychology Today. “I want American mothers to stop thinking that somehow their conflict is their own fault, and that if they tried a little harder, got a new schedule, woke up a little earlier every morning, using the right planner or the right app, that they could somehow figure out the key to managing their stress.”

There’s a long road ahead, but it’s not an impossible task. Collins hopes her readers will walk away inspired to make much-needed change.

“If all these other wealthy Western industrialized nations have figured it out, why can’t we?" she comments to Psychology Today. “There are a lot of smart people here and we can figure it out.”