10 Things You Did During Pregnancy You’d Never Tell Anyone

It’s time to spill: What outrageous things did you do during pregnancy that would make people cringe? 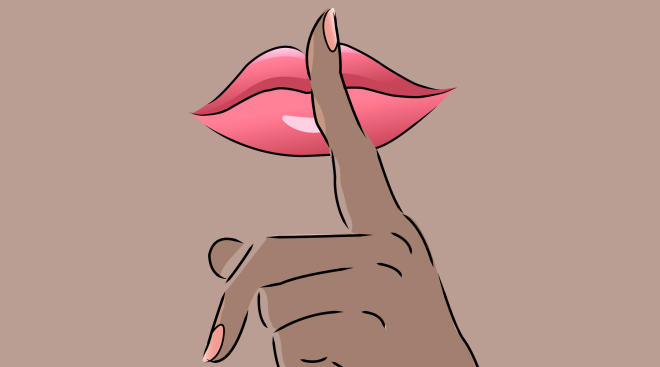 I Played Up the “Pregnancy Card”

Excuses, excuses. Have you lied about not feeling well or used pregnancy as an excuse to get out of things? Like you told your mother-in-law you couldn’t visit her because you were just too exhausted? Or you didn’t want to have lunch with a friend who was getting on your nerves, so you blamed your absence on every kind of food making you nauseous?

We’ve even heard of a mom-to-be who got bumped up to first class because the flight attendants thought she would be more comfortable there. And one of our editors got out of doing cleaning chores because she told her husband the fumes from the products are toxic. Yeah, we know you’ve done it—and hey, it’s okay to milk your condition every once in a while.

I Fell Asleep at Work

You can barely sleep at night, but right when you get to work, “Bam!” you’re exhausted. We’ve heard of pregnant ladies taking a little siesta during office hours. So maybe you took a little nap at your desk—it’s okay, blame pregnancy. Just make sure to wipe the drool off before your boss sees you. You don’t want to get fired before you start maternity leave.

I Ate Stuff My Doctor Told Me Was Off-Limits

Why are all the delicious foods banned during pregnancy? Some moms can’t live without their sushi, deli sandwiches or their favorite triple-shot coffee drink. But those things are all foods you’re supposed to give up while you’re pregnant. Deli meat can potentially carry listeria, which can cause serious illness and risks (like miscarriage, preterm labor and stillbirth) for pregnant women. Raw fish can carry parasites and high levels of mercury. And caffeine will make you have to go to the bathroom more than usual (and you thought that wasn’t possible!), which can decrease your fluid and calcium levels. Plus, caffeine can change baby’s sleep patterns and make him or her restless in the womb, because it passes through the placenta to baby.

Posing nude on the cover of magazines is a big hit with pregnant celebs, but would you take some photos in the buff while pregnant? It’s not exactly Playboy, and a lot of moms-to-be do pose nude for their maternity photo shoots. We say if it’s your style, flaunt that pregnant bod! 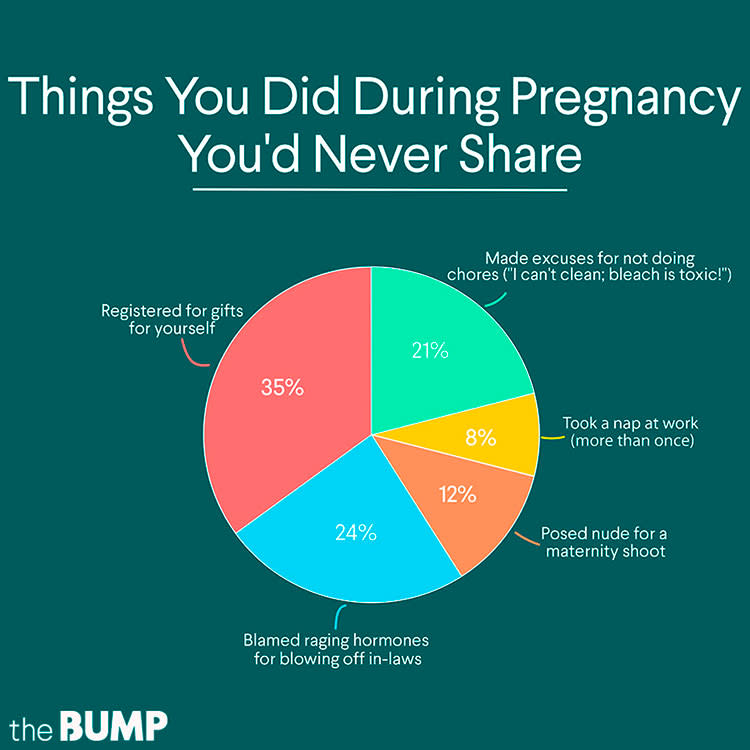 I Used My Registry to Get Stuff for Me

Apparently baby’s registry doesn’t always have to be just for your future son or daughter. One dad we know put a Wii on his baby’s registry. Maybe it’s wishful thinking for a baby-and-dad Wii Fit bonding session? While you can’t exactly put a pair of Christian Louboutins or a new flat-screen TV on the registry, you can definitely sneak in a few things that will make your life easier, like a new camera or some postbirth beauty products.

I Was a Nymphomaniac

You couldn’t get enough sex—it didn’t matter where you were, what time it was or if your partner was trying to get some sleep. You had to do it. And hey, an increased sex drive can be a symptom of pregnancy (you can blame the hormones when your tired partner whimpers, “Again?!”). We’ve heard of women who went crazy for sex during their pregnancy (although, for the record, we’ve also heard of those who experienced the opposite effect). We’re talking a few notches below porn-star status. We say enjoy it while it lasts (and as long as your doctor says it’s safe), because you aren’t going to be getting any right after baby’s born.

I Was Disappointed With Baby’s Gender

We don’t want to hear about how you’ll be happy with whatever gender baby is. We know some of you were crushed when you saw baby’s sex on the ultrasound. We know of one mom-to-be, expecting twin girls, who was pretty annoyed and jealous that her friend was having a baby boy. And another one cried because she wasn’t having a daughter. It’s okay to be upset and to play favorites with gender—just let it all out. We guarantee that you’ll be completely happy and in love with your baby when you finally meet him or her.

I Pretended to Be Hormonal

All you’ve been hearing about throughout your pregnancy is that your hormones are going crazy. So if everyone thinks you’re a madwoman because you’re “hormonal,” you can milk it. We know of one mom who didn’t want her in-laws to come over and made a big fuss about it, blaming her raging hormones. Let’s face it: Even if you assure people you’re not hormonal, they’ll just give you a patronizing “O-kay…”

I Drank During Pregnancy

This is usually considered a big no-no, but we’ve heard of moms who’ve had a couple of drinks during pregnancy. In fact, the March of Dimes states that 1 in 10 women drink during pregnancy and a third of these women report binge drinking (four or more drinks in one sitting). The problem here is that some people say a drink here and there won’t do any damage. But there isn’t a known about of alcohol that is safe to drink during pregnancy,and alcohol has been shown to cause fetal alcohol syndrome, which is associated with abnormal facial features, growth problems and developmental and learning disabilities. Yikes! So if you drank before you even knew you were pregnant, but then stopped immediately, try not to worry. There’s nothing you can do now but continue a safe pregnancy diet, so you shouldn’t beat yourself up about it.

I Smoked During Pregnancy

It’s hard to kick the habit. Some women think that switching to mild cigarettes might be a safe choice. Others indulge in the occasional cigarette now and then. But you really shouldn’t smoke at all because any amount could be harmful to baby. The problem is, quitting smoking is ridiculously hard. According to the Centers for Disease Control and Prevention’s 2011 Pregnancy Risk Assessment and Monitoring System (the most recent year available), data showed that 10 percent of women reported smoking during the last three months of their pregnancies and 55 percent of those women had quit during pregnancy. Of the women who quit, 40 percent gave in to temptation during the six months after giving birth.

If you want your baby to be as healthy as possible, you’ll need to quit. Smoking can expose baby to nicotine, carbon monoxide and tar. Plus, baby will get a decreased amount of oxygen, which can cause developmental problems. Smoking can increase the risk of preterm labor, low birth weight and birth defects. And if that doesn’t scare you, this will: Babies born to smokers are almost five times as likely to die of SIDS.

What Is and Isn’t Safe During Pregnancy