This model mama is as real as they come. Ashley Graham is the mom bestie we all want (and strive to be). The model, mogul and mama is as real and relatable as they come, and she’s not afraid to tell it like it is—about everything from diaper blowouts to squeezing in sex. (We told you: Total bestie vibes.) And while she’s often referred to as a body-positivity icon, we’ll go a step further and say she’s the parenting paragon we all need. She celebrates her wins, owns her flaws and confidently shines a light on the stigmas that bring us down as women, mothers and human beings. (Moreover, she does it all with empathy and a hearty dose of humor.) The Bump recently sat down with the mom of three and Coterie investor to chat all things parenthood—and her signature honesty did not disappoint.

The Bump: So as a mom of three, you definitely know your diapers. And you’re not only a loyal user and fan of Coterie, you’re also now an investor. So how has this new role shifted your perspective?

Ashley Graham: It hasn’t shifted the way I look at the brand at all, because I was such a big fan of Coterie before. I actually called Coterie and said, “I really want to work with you guys. This is something that I really want to do.” And it took them a little bit to finally say yes… But being an investor just means that I get to invest in something that I use on a daily basis. That solution base has changed my life—because it just makes everything so much easier. 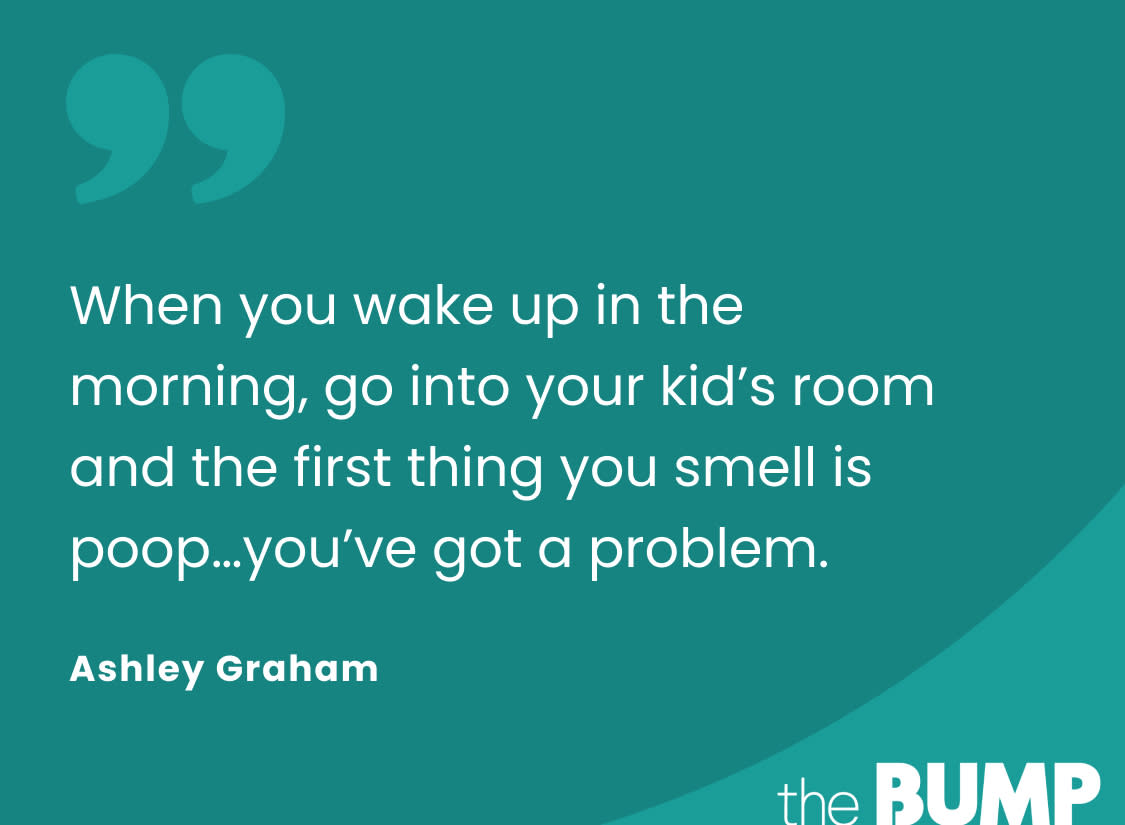 TB: So I know you said that you’ve used lots of other diaper brands in the past and had a lot of points of frustration. So was there a particularly bad blowout or some memorable moment where you were like: That’s it!

AG: I think when you wake up in the morning and you go into your kid’s bedroom, and the first thing you smell is poop, you’ve got a problem. Because that normally means it’s on the outside of the [diaper]. And I think it happened, in the course of a week, maybe three times, and I was like, this is not okay. But my mom kind of was like, “Well, this is just how it is.” Because for her generation, there were only a couple of different diapers. And I started calling into the mommy groups, and I was like, “What diapers are you guys using?” And one of my friends was using Coterie. And I tried it and fell in love instantly. And the twins actually have never had any other diaper. They’ve only had Coterie.

TB: I know you’re also transitioning to Coterie’s training pant, right? What has been the biggest surprise for you in the potty training experience thus far? Any fun stories?

AG: Okay, well, I’m just getting into it. And I’m a little bit reluctant—only because that means that he’s graduating to a new [stage]. And I don’t mind changing his diaper. It’s not something that is exhausting to me or tiring. I don’t know, I’m just in the habit of it, right? So I’m not excited about cleaning up the messes, and all of that just is a little bit daunting. But I am excited to know that when we go on a trip, it’ll mean a lot less things.

TB: You’ve talked a lot about the transition into parenthood and the fourth trimester, which is truly such a roller coaster experience for moms physically, mentally and emotionally. When did you start feeling like yourself again the first time around? How about after the twins? Are you there yet? Are you almost there? Does “there” even exist?

AG: I think the first time around—man, I mean, we were in a pandemic. So I had Isaac in January, and then I got pregnant again the next January and had a miscarriage. And then a month later, I got pregnant with the twins. So I have to be honest, I don’t know if I ever felt like myself. And my body is still screaming at me for that. And after the twins—I mean—you know, I had twins! It didn’t matter if I hemorrhaged or not. It didn’t matter if I moved to another state or not. I also had a toddler—and it was just a lot. I’m now working with my Chinese herbalist, and I’m on all the Chinese herbs in the world and, finally, she’s like, “Your kidneys are fired back up.” And I’m like, “Cool.” And now I can kind of take a step back and [evaluate] goals and be like, “Okay, “What do I want?” And even though there’s lots of guilt that goes with it, I’m working on the guilt and pouring into myself right now. 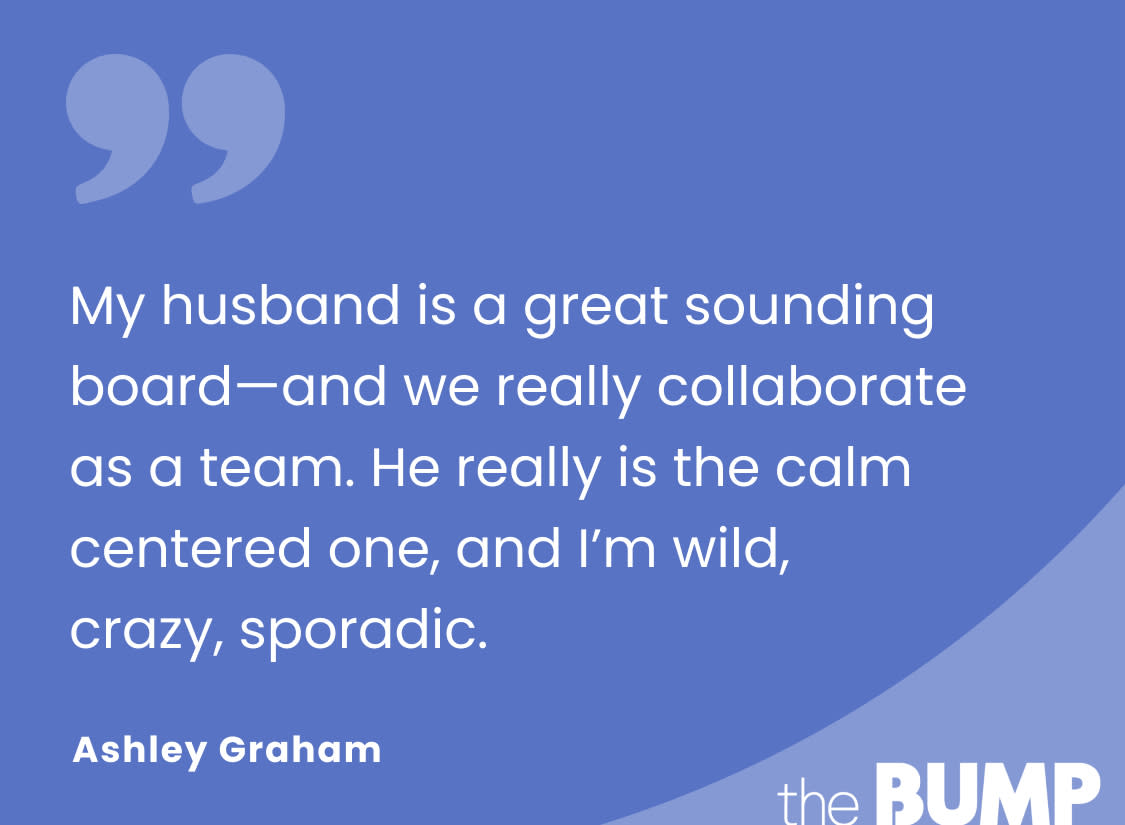 TB: You’ve spoken about the stigma society puts on us as new moms—but also the stigmas we place on ourselves. So what do you say to yourself? How do you treat yourself with grace and kindness when those voices in your head start to challenge your parenting choices?

AG: My husband is a great sounding board—and we really collaborate as a team. He really is the calm, centered one, and I’m wild, crazy, sporadic. And I think that’s what makes us a great team. But I have to always remind myself (and it’s something that my mom told me): Mommy knows best… I know what’s best for my kids. So if I’m going to make a decision for them, it’s because I am going from my gut feelings. 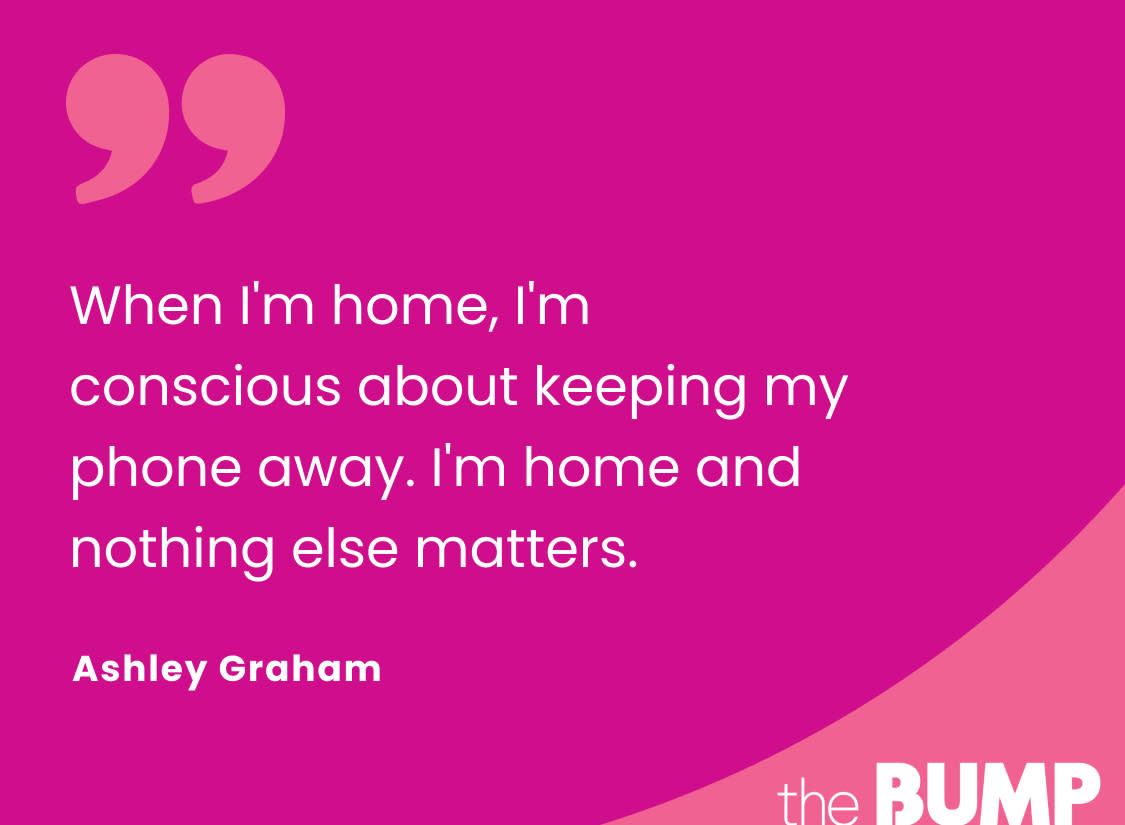 TB: What about mom guilt? It’s inevitable. It creeps in. Even this morning, I saw you posted on Instagram that you miss your kids being away. So how do you deal with the guilt when you’re juggling so much—when you’re wearing so many hats? How do you know what to prioritize and which hat to wear? And how do you say to yourself “it’s okay”?

AG: When I’m home, I’m conscious about keeping my phone away. Either it’s on a counter in a different room, or it’s in my bedside drawer. And I just don’t want to have to deal with it. And then I get to it when the kids are down. I really like it, because I feel like, lately, I’ve been gone so much. When I’m home, I’m home and nothing else matters.

TB: Do you have any mantras that you say to yourself from a parenting perspective—any truths you repeat?

AG: I have always been very into prayer and meditation. And I think that it’s hard as a new parent to make time for yourself. Because, when you have time, it’s like, there’s laundry, there’s organizing, there’s the kitchen, there’s the food prep. It’s like, “Should I sleep?” So that has been something that has really been put to the side for me that I’m now introducing back again, because if I don’t have that, I feel chaotic. So my mantras and my quiet time really resonate in those moments for me—and just reminding myself who I am before I have to show up as a mom.

TB: And that touches on self-care. What’s your ideal self-care moment, when you can squeeze it in. If you’ve got like five minutes versus if you’ve got a whole blissful day?

AG: On the way here, in the car, I washed off my face. And that felt really good… If I have three hours, I’ll go to Williamsburg and get acupuncture from my favorite acupuncturist, Sandra Lanshin. And so it really runs the gamut.

TB: What would you consider your parenting superpower?

AG: I feel like I thrive in a tantrum. They don’t get under my skin. The screaming and the crying doesn’t bother me, even in a driving car. And I know that if I stay calm and just let it happen, everything will be okay at the end of it. I like to credit TikTok, because I’ve learned so much as a mother on TikTok. I learned to sympathize in the moment, because—even if they don’t understand why—they’re crying. There’s a conversation around it, like “I’m so sorry you feel like that. And I know, this is a hard moment for you.” I didn’t know that was an option as a parent, like I thought it was like, “Really, you’re gonna cry?!” It’s what you learn from your own experience, right? And I feel like in those moments, I do give myself a pat on the back.

AG: The first thing that pops into my head, to be completely honest—and I don’t know if it’s actually answering your question—I think about these parents that have these like charcuterie boards [for their kids]. It’s like sliced avocado and flaxseed bread, and they’ve sliced an apple with a few berries and a little dash of peanut butter. Meanwhile, it’s just beige on my kid’s plate; it’s oatmeal with maple syrup. And I’m like: “It is what it is—because you’re not going to eat anything else. And if I make something else, you’re just gonna throw it on the ground. So here we go.” And that’s been his breakfast every day for two years. And I feel so bad for him, but he just won’t divert to something else. So that’s my Instagram versus reality.

TB: With that in mind, if you could share one parenting truth to prospective parents—one glaring piece of been-there-done-that advice—before they welcome their child into the world, what would it be?

TB: Tell me, what does date night look like these days?

AG: Sex… I mean, sometimes that’s all you have time for… But we do date nights. We try; when we had Isaac, it was once a week. Now, it’s at least twice a month… We sit down [at dinner] and we’re like, “Okay, let’s talk about the kids for 10 minutes, and then not for the rest of [the night].” Yeah, it’s critical. It’s really difficult.

TB: You’ve shared about your nursing and pumping journey. What was your favorite nursing or pumping activity? Was it binge watching? Listening to a podcast? Staring into space?

AG: Wow. Okay, so I haven’t pumped in a while. Usually, because I am such a multitasker, it would be taking meetings on a Zoom or emailing—so it wasn’t like I was enjoying other things. My whole team has seen my tits.

AG: So I bought a tackle box, okay, and I put different snacks in it. And, on an airplane, Isaac’s mind was blown. It was like a smorgasbord of all of his favorite snacks. And that was great.

TB: What’s your favorite book to read to your children?

AG: Isaac likes Diggersaurs. It’s not about my favorite—it’s about Isaac’s.

TB: Last but not least, what are some words of wisdom to impart on moms who are struggling with that fourth trimester and the transition into parenthood?

AG: This is just a phase, and this too shall pass. Also, if you can, [try to] carve out 30 minutes where you can just go be alone. Yeah, it’s hard. It’s so hard. It’s so much easier to say. When you’re in the moment, it’s even hard to take that advice. So I say it with caution. All of that. Why Gentle Parenting Just Doesn’t Work for Me Bonding With Baby: How Long Does It Take to Connect With Your Newborn?
ADVERTISEMENT

The Top 10 Gifts to Give Yourself, According to Other Moms
ADVERTISEMENT
ADVERTISEMENT
Article saved.Go to My Saved Articles
Article removed.
Name added. View Your List