Everything You Need to Know About Attachment Parenting

Before you decide attachment parenting is (or isn’t) right for you, here’s the 411 from experts and moms who’ve tried it. 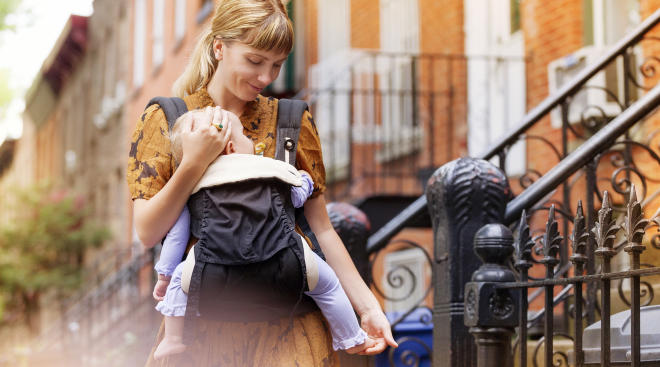 Outspoken practitioners like actress Mayim Bialik talk extensively about the ins and outs of attachment parenting—the extended breastfeeding, the co-sleeping, the babywearing (no strollers allowed)—and the closeness it brings them. But equally outspoken critics say that’s not at all what parenting should be about. Who’s right? By digging into the principles that underlie the baby pampering, we found that the truth is somewhere in between—and that attachment parenting is quite possibly one of the most misunderstood child-raising methods today.

What Is Attachment Parenting Anyway?

Attachment-style parenting focuses on treating the child with respect and building a strong bond between child and parent. To do that, parents are encouraged to respond quickly to baby’s cries and engage in behaviors intended to keep baby close—including things like co-sleeping, babywearing and breastfeeding in their day-to-day life.

“We’ve done a lot of research on infant and child development, and there’s new learning on how early experience shapes our personality and brain development and impacts our whole trajectory in life,” says Alyson Schafer, therapist and author of Honey, I Wrecked the Kids. “Kids’ emotional needs need to be addressed by caregivers.” That’s exactly what attachment parents hope to accomplish.

The Eight Principles of Attachment Parenting

Attachment parenting comes with a set of principles to help guide parents toward a stronger bond with their children. Here’s a look at the fundamental guidelines of the practice.

1. Prepare for pregnancy, birth and parenting. Parenting is a huge undertaking and milestone—one that parents-to-be should prepare for in advance. Attachment parenting encourages moms-to-be to explore different types of healthcare providers and birthing options, including more natural birth methods, and to be physically active and alert during childbirth.

2. Respond with sensitivity. The overriding concept behind this parenting philosophy is to treat your child with respect and understand that baby never cries without reason—and that means you need to be there for baby when he’s upset. “Attachment parenting involves not letting the child ‘cry it out’ but, instead, intervening early in the crying bout and reacting to the child’s distress before it gets out of control,” says Fran Walfish, PsyD, child and family psychotherapist and author of The Self-Aware Parent.

3. Feed with love and respect. Breastfeeding is the gold standard, as far as attachment parents are concerned—but no matter how you feed baby, you’re following your child’s lead. “You allow the child to set the timing of feeding—whether breast- or bottle-fed—along with self-weaning,” Walfish says. Also important: Engaging baby when you feed her—minimize distractions and use the time to talk and snuggle with your child.

4. Use a nurturing touch. Attachment parenting is a snuggly business. Babywearing and holding—and even gentle baby massage—is encouraged.

5. Engage in nighttime parenting. Even when baby’s (hopefully) resting, attachment parenting sleep guidelines recommend keeping her close, whether co-sleeping in the same bed if it can be accomplished safely, or at least in the same bedroom.

6. Provide constant love and care. Social bonds are essential for a happy, healthy life, and by giving your care to baby, you’re helping to set him up for success. “All human beings are wired to have as a primary need a social bond with their fellow man,” Schafer says. “Attachment with mom or dad is the first attachment and the way we learn about how to be in a relationship. The primary caregiver makes sure that you’re fed, helps calm you when you’re rattled or stressed, and that makes kids happy and healthy.”

7. Practice positive discipline. Time outs and physical punishment like spanking are big no-nos. Instead, attachment parenting discipline stresses a more positive approach, where parents encourage good behavior rather than punishing bad, use distraction and substitution to stop bad behavior and work out a solution with their child.

8. Strive for balance in personal and family life. This can often be one of the most challenging parts for new attachment parents—finding that balance between caring for baby’s needs and caring for their own. “There’s a real overemphasis on putting kids first, never doing our own self-care or relationship care,” Schafer says. It’s not a matter of putting baby’s needs first or your needs first but that both needs are being fulfilled.

Like every other parenting style, the attachment sort has its benefits and drawbacks—with the latter often the source of criticism because of its burden on the parents, particularly the mother.

• You build a strong, secure relationship with your child. “Attachment parenting focuses on the relationship between parent and child, and that has an intuitive feel for people,” says Tracy Cassels, PhD, founder of the parenting website Evolutionary Parenting. You’ll build a strong bond that may help ensure that your family remains close as your child grows up.

• You’ll need to make significant sacrifices. Co-sleeping, breastfeeding on demand, babywearing—attachment parenting requires commitments that many new parents aren’t necessarily prepared for, as you sacrifice time for self-care and other relationships. “We live in a culture where pre-kids is all about us,” Cassels says. “But then you don’t get to do that anymore—you have to put someone else first. When someone else requires so much of you, it can be physically and mentally draining beyond belief.” And all of that can be difficult to manage if you’re also trying to work (unless you have a job that allows you to bring baby along in a sling!).

• It can be overwhelming. With information overload from the Internet, it can be challenging to figure out how to “do it right.” “We’ve turned something that’s supposed to be simple into something with so many choices and no ideas of which one works for you,” Cassels says. As an example, she points to the plethora of baby wraps and carriers out there—and how difficult it can be to find the right one for baby wearing.

The Story Behind Attachment Parenting

Aspects of attachment parenting are rooted in some of the earliest parenting practices—breastfeeding and co-sleeping were the way to go back in early human history. “Babies have been baby worn forever,” Cassels says.

During and after World War II, many children ended up in orphanages, and psychiatrist John Bowlby’s research on the impact of institutionalization on their development and health led to a better understanding of the importance of building loving, responsive relationships. Psychologist Mary Ainsworth did considerable research on the different types of attachment—secure, ambivalent and avoidant—and determined how to measure a child’s bond with her parent.

Pediatrician Benjamin Spock first brought the idea of attachment parenting to the forefront with his seminal book The Common Sense Book of Baby and Child Care, which encouraged parents to consider their children as individuals and not force a parent’s own schedule on the child. But it was pediatrician William Sears, MD, who, in the 1980s, coined the term “attachment parenting.” Unhappy about the trend at the time toward sleep training and enforcing schedules for children, he essentially applied “attachment parenting” to Spock’s concept of child-rearing.

Connecting with your kids seems like it should be a no-brainer (who doesn’t want to bond with their kids?). But many parenting experts and parents find reasons for concern. Some of the attachment parenting criticism started in 2012 when Time magazine notoriously featured the theory in an article entitled, “Are You Mom Enough?” and pictured a woman breastfeeding a 3-year-old on the cover. That more extreme view of attachment parenting—that you’re failing at it if you’re not breastfeeding until kindergarten, co-sleeping and constantly by baby’s side—has seeped onto the Internet and social media. That’s where you’ll find some of the more sanctimonious attachment parents shaming other parents for what they perceive as failures. “People are so judgy online,” Cassels says. “People get all uppity about it. I’ve read stories from people who said attachment parenting almost ruined their life. They treated it as, ‘I must do all of these things.’ But by doing that, they ignored their baby’s cry.” For instance, they forced babywearing on a baby who was crying through it—because attachment parenting said that babywearing was the way to go.

These critics may make some parents believe that attachment parenting is a strict, all-or-nothing approach and that it would make new moms feel like failures if they can’t live up to these ideals—for instance, if breastfeeding doesn’t work out for them. But that’s simply not the case. “You don’t have to babywear, you don’t have to breastfeed, you can still work and be an attachment parent,” Cassels says. “Do it in ways that work for you and baby. If there’s too hard-line a view on what it is to be an attachment parent, you’re missing the important nuance of the relationship being central to everything.”

And there’s concern that some of the aspects of attachment parenting—such as co-sleeping in the same bed—are not actually safe for babies. (In fact, the American Academy of Pediatrics, while recommending that children sleep in the same room as their parents for the first year of life, warns against allowing baby to sleep in your bed, due to the risk of suffocation.)

For some moms who’ve tried the practice, the toll—on themselves and their other relationships—was too much to bear. Mom of two Lynn Shattuck, a blogger at The Light Will Find You, found that after several months, the feeding on demand wore on her mental and physical health. “As a sensitive, perfectionistic people-pleaser, it wasn’t a big stretch to fall into putting my son’s needs and wants ahead of my own, to my own detriment,” says Shattuck, who still practices a less extreme form of attachment parenting with her children. “The mythology of motherhood as this all-encompassing, selfless act of martyrdom is still alive and well in many of us.” For Shattuck, that meant keeping the elements of attachment parenting that worked for her and jettisoning the things that didn’t. “I am still very much tuned into their needs and consider us to be firmly ‘attached,’” she says. “Take what you like from any type of parenting philosophy or practice and leave the rest. Our parenting styles don’t have to be black and white, and for most of us, rarely are.”

Others point to the fact that for some parents, attachment parenting too often slides into helicopter parenting and overindulgence. And they believe this leads to spoiled kids and a lack of independence as they reach adulthood. “We’re seeing parents who are being quite pampering in their approach—if the child cries, they get whatever they want,” Schafer says. “This is not at all what was meant by attachment parenting. Children have to learn they aren’t the center of the universe but one star in the universe.”

And, of course, many point to the fact that attachment parenting’s ideals can be challenging for many parents in modern society to adhere to, when single parents and dual-income couples are becoming more common than the traditional two-parent, mom-stays-home demographic.

Taking the approach that it’s not a do-or-die set of rules but, rather, an overarching parenting style that you can adapt to your own situation can help alleviate some of these attachment parenting criticisms. For example, if breastfeeding isn’t working for you, you can give it up and continue with other aspects of attachment parenting, like babywearing. Or if co-sleeping doesn’t make you and your partner happy, you can skip that part and embrace the other elements. “As a set of rules to guide you, attachment parenting can be very helpful,” Cassels says. “We do need to be close and do need to be responsive to our children.”