18 Celebrities Who’ve Opened Up About Miscarriage

Celebrities are candidly sharing their stories of heartbreak and loss to help other families feel like they’re not alone. 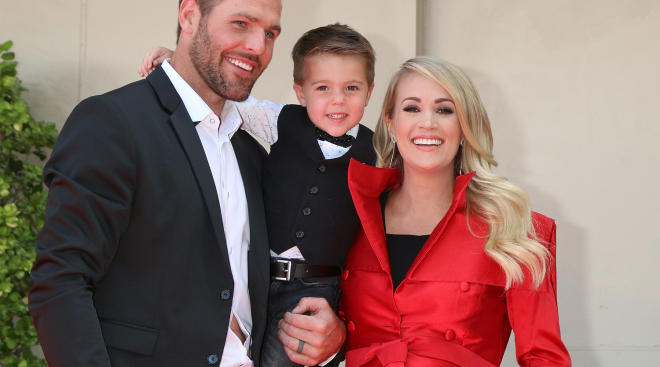 When we go through an emotionally traumatic experience, we often close down and keep the pain private—and miscarriage can be a heartrending ordeal. Sadly, up to 25 percent of pregnancies end in miscarriage. But the more we talk about it, the less people will feel alone. In recent years, celebrities have stepped up to share their stories of loss. Here are the famous faces who’ve had the courage to open up about their experiences with miscarriage.

Country music star Carrie Underwood has experienced not one but three miscarriages. She gave birth to son Isaiah in 2015. But “2017 just wasn’t how I imagined it,” she said. “I’d kind of planned that 2017 was, you know, going to be the year that I work on new music, and I have a baby. We got pregnant early 2017, and didn’t work out.” She became pregnant again in the spring, but experienced a second miscarriage, and a third in early 2018. “At that point, it was just kind of like, ‘Okay, like, what’s the deal? What is all of this?’” But good news: Underwood is currently pregnant again.

Singer Nick Carter of Backstreet Boys fame and wife Lauren Kitt have a son Odin—and were expecting a baby girl in 2018 until Kitt suffered a miscarriage. “God give us peace during this time. I really was looking forward to meeting her after 3 months. I’m heart broken,” Carter posted to Twitter.

Chan is another celebrity who has experienced three miscarriages. In 2015, she and husband Mark Zuckerberg, co-founder and CEO of Facebook, announced that they were expecting a baby girl—joyful news after their loss. “We’ve been trying to have a child for a couple of years and have had three miscarriages along the way,” Zuckerberg posted to Facebook. “You feel so hopeful when you learn you’re going to have a child. You start imagining who they’ll become and dreaming of hopes for their future. You start making plans, and then they’re gone. It’s a lonely experience.”

“Most people don’t discuss miscarriages because you worry your problems will distance you or reflect upon you—as if you’re defective or did something to cause this. So you struggle on your own,” he said. “In today’s open and connected world, discussing these issues doesn’t distance us; it brings us together. It creates understanding and tolerance, and it gives us hope.”

James Van Der Beek and wife Kimberly Brook have five children together. But there has been loss along the way. “Wanted to say a thing or two about miscarriages, of which we’ve had three over the years,” he wrote in a 2018 Instagram post. “First off—we need a new word for it. “Mis-carriage”, in an insidious way, suggests fault for the mother—as if she dropped something, or failed to “carry.” From what I’ve learned, in all but the most obvious, extreme cases, it has nothing to do with anything the mother did or didn’t do. So let’s wipe all blame off the table before we even start.”

“Second,” he continued, “it will tear you open like nothing else. It’s painful and it’s heartbreaking on levels deeper than you may have ever experienced. So don’t judge your grief, or try to rationalize your way around it. Let it flow in the waves in which it comes, and allow it its rightful space. And then, once you’re able, try to recognize the beauty in how you put yourself back together differently than you were before.”

Celebrity chef Gordon Ramsay and wife Tana have four children—but in 2016 they shared that Tana miscarried five months into her fifth pregnancy. “We were devastated, but thankfully we’re through the worst now. It could happen at any time to anyone,” Ramsay said in an interview four months later. “It has brought us all so much closer,’ he said. 'You realize how lucky you are and you reflect on what you have, how fortunate you are with your remaining children and you remind yourself of what you’ve got. It’s made the family unit even tighter.”

Ludacris‘ wife, Eudoxie Mbouguiengue, revealed she suffered a miscarriage in 2018. “This year didn’t necessarily start off right for us,” she posted to Instagram. “I had a miscarriage and needed to have surgery. It was very easy to complain and self pity but I refused to let the enemy win. I stayed faithful and prayed up. I spent hours focusing on the many ways the Lord has blessed me. How could I complain when God has blessed me with the opportunity to already experience motherhood? I’m sharing this with you all to remind you to live in gratitude.” Mbouguiengue and the rapper-turned-movie star have a daughter, Cadence.

In March 2014, Lindsay Lohan revealed that a painful miscarriage was the reason she missed some filming for her docuseries, Lindsay. “I cried so many times watching the show,” she said. “If I know I’m not capable of being on, that’s why I would say I couldn’t film today. No one knows this… I had a miscarriage for those two weeks that I took off.”

“I couldn’t move. I was sick,” she said. “And mentally that messes with you. Watching this series, I just know how I felt at that moment and I can relate to that girl, which sounds kind of crazy. I’m like, ‘Oh my god, this is really sad. Who’s helping her?’”

The British pop singer has been unflinchingly honest about having a miscarriage in 2008 and a heartbreaking stillbirth, losing a baby boy at six months pregnant in 2010.

“It was horrendous and something I would not wish on my worst enemy,” she has said of the stillbirth. “I have dealt with it, you know, as being at one with it. But it’s not something that you get over. I held my child and it was really horrific and painful—one of the hardest things that can happen to a person.”

Today, Allen and her husband Sam Cooper are now parents to two girls, Ethel and Marnie. Of her stillborn baby she says, “I just think that he’s a part of my eldest, really. If he hadn’t died, it wouldn’t have physically been possible for our eldest to be alive because I got pregnant with her so quickly. We’ve got a little stone in our garden with his name on. And lots of different things that I do, rituals, I have him in my mind. My husband and I shared this horrible thing together but it kind of brought us closer.”

Gwyneth Paltrow says she lost her third pregnancy, and that the miscarriage threatened her life. “My children ask me to have a baby all the time," she said in 2013. “And you never know, I could squeeze one more in. I am missing my third. I’m thinking about it. But I had a really bad experience when I was pregnant with my third. It didn’t work out and I nearly died. So I’m like, ‘Are we good here or should we go back and try again?’”

Opening up about her struggle to conceive, Beyonce said, “About two years ago, I was pregnant for the first time and I heard the heartbeat, which was the most beautiful music I ever heard in my life. I picked out names, I envisioned what my child would look like… I was feeling very maternal. I flew back to New York to get my check up—and no heartbeat. Literally the week before I went to the doctor, everything was fine, but there was no heartbeat. I went into the studio and wrote the saddest song I’ve ever written in my life called Heartbeat. And it was actually the first song I wrote for my album. And it was the best form of therapy for me, because it was the saddest thing I’ve ever been through.” Queen Bey is now mother to three children: Blue Ivy and twins Rumi and Sir.

Before welcoming her adorable daughter Coco, Cox struggled with several miscarriages. She said, “I get pregnant pretty easily, but I have a hard time keeping them.”

Before welcoming her twins Moroccan and Monroe, Carey and her husband Nick Cannon experienced a miscarriage. She said, “It kind of shook us both and took us into a place that was really dark and difficult. When that happened… I wasn’t able to even talk to anybody about it. That was not easy.”

The reality TV star, who is mom to daughter Bryn, miscarried eight weeks into her second pregnancy. She said, “I’ve had women that I’ve been friends with in the past say they had a miscarriage. And I kind of didn’t really understand, and I’d say, ‘I’m so sorry, that’s terrible.’ But not until you really go through it do you understand what it means. In your head, it’s a person that could never be. You blame yourself as a woman.”

Opening up about the emotional toll of her miscarriage, Kirstie Alley said, "When the baby was gone, I just didn’t really get over it. Neither did my body. I so thoroughly convinced my body that it was still pregnant after nine months that I had milk coming from my breasts. I was still fat, I was still grieving, and I had just been told it was very possible I would never be able to have children.” After that, Alley adopted two children, William and Lillie.

After miscarrying, Shields wrote, “We were crushed. Up 'til then, I thought simply because it was time and I wanted to have a baby, it would work.” She would later go on to have two children, Rown and Grier.

Though the actress has been mum on her relationship with ex-husband Tom Cruise, she did say, “From the minute Tom and I were married, I wanted to have babies. And we lost a baby early on, so that was really very traumatic. And that’s when we would adopt Bella.”

Sharing her sadness at not having any more children after her daughter Gaia, the star said, “There’s been an awful lot of grief to get through in not being able to get pregnant again, but there are thousands and thousands of women like me who can’t have children."

How to Cope After Having a Miscarriage