Dehydration is a dangerous condition for a baby. Here’s how to make sure baby’s getting plenty of liquids, even when he’s sick. 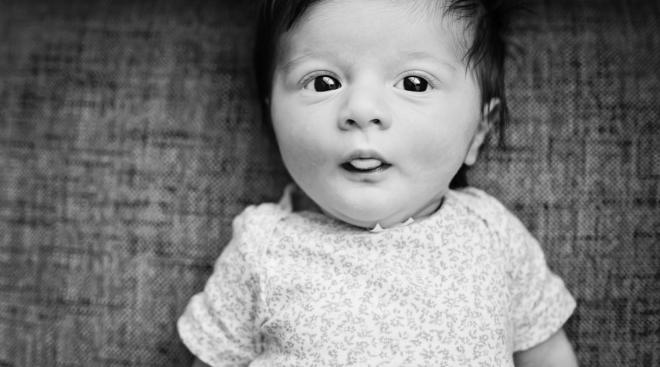 Dehydration occurs when baby isn’t taking in enough fluids to equal what’s going out. The human body is almost 75 percent liquid, so a lack of fluids can cause major problems in how it functions.

What are the symptoms of dehydration in babies?

One sign of dehydration is a decrease in the number of wet diapers. If your child normally pees three or four times a day and has only peed once by bedtime, he may be dehydrated.

Because dehydration affects the entire body, you can also watch your child’s activity level. “If a child becomes dehydrated, they tend to not want to play or smile; they tend to sleep a lot,” says Katherine O’Connor, MD, a pediatric hospitalist at The Children’s Hospital at Montefiore in New York City. “If your baby is playful and looking all around and babbling, those are good signs he’s not dehydrated.”

Check your child’s tongue, mouth and eyes too. When a baby gets very dehydrated, his tongue and mouth look dry, and his eyes may appear sunken. You may even notice that, when he cries, there are no tears, O’Connor says. Those are signs of more severe dehydration.

Are there any tests for dehydration in babies?

Doctors can usually identify dehydration based on baby’s symptoms. (If your child has been vomiting, has had loose stools for three days and now is listless, he’s probably dehydrated.) Baby’s pediatrician might want to run some tests to figure out the cause of dehydration or to plan appropriate treatment. A blood sample can help determine the degree of dehydration; it can also show your child’s electrolyte levels. Dehydration messes up the body’s potassium, sodium and chloride levels, so baby may need medications and IV fluids to correct any imbalances.

How common is dehydration in babies?

Dehydration is most common among kids who have a stomach virus. Healthy kids almost never become dehydrated.

How did my baby get dehydrated?

Dehydration is often caused by a stomach illness like gastroenteritis, O’Connor says. Dehydration can also occur if kids don’t drink enough when they’re outside in extreme heat.

What’s the best way to treat dehydration in babies?

“Anytime that your child seems to be not drinking as much or is having quite a bit of  diarrhea or vomiting, you want to give small amounts of fluid consistently throughout the day,” O’Connor says. “If you give your child a big bottle, he’ll probably throw it right back up again. But if, instead of feeding him every three hours, you try every half hour to give him a little bit, you can usually stay on top of his fluid intake and keep him hydrated.”

You can also offer your baby or toddler an electrolyte solution, such as Pedialyte.

Some kids will need medical attention for dehydration. If your child seems listless and continues to have symptoms of dehydration despite your best attempts, it’s time to see a doctor. Your child might need IV fluids to get back on track.

What can I do to prevent my baby from getting dehydrated?

What do other moms do when their babies are dehydrated?

“I noticed my baby’s fontanel was really sunken in as I took her out of the car seat after a short trip of errands this morning. I freaked out a tiny bit. I heard that can be because of dehydration. My question is: Breast milk will help with hydrating, but is there something else I should do also?”

“The soft spot will sometimes sink. It’s not a cause for major concern unless it’s super-sunken. Also, if your baby is dehydrated, there won’t be tears — her mouth will be dry, no wet diapers, and when you pinch the skin, how quickly it bounces back. You have to look at the bigger picture, not just one symptom.”

Are there any other resources for dehydration in babies?