What to Do When Baby Has a Cough

Baby’s bound to get a cough at some point, but how can you know what kind of cough it is, and what to do for it? Doctors share the important clues to look out for.
facebook
twitter
copy link
share
save
ByKorin Miller
UpdatedDec 2018 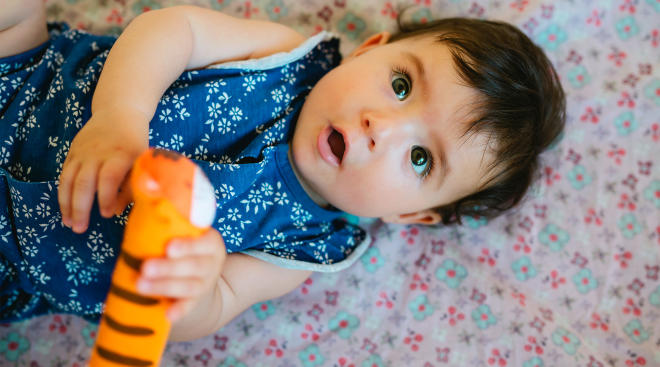 There’s nothing like a baby cough to completely stump parents. Is it something serious, or no big deal? Trying to figure out when to take action and when to let things ride can be incredibly stressful, especially if baby has been coughing at night.

While a baby cough can be uncomfortable for baby and nerve-wracking for you, “it’s extremely common for kids to cough,” says Benjamin Nelson, MD, director of pediatric bronchoscopy at MassGeneral Hospital for Children in Boston. If your child is eating, breathing and sleeping normally, a cough isn’t usually anything to worry about and tends to resolve on its own. But it’s something to keep an eye on, since it can progress to something more serious. Here’s what to know when baby has a cough.

In this article:
How to Decode Baby’s Cough
Baby Cough Remedies
When to Call the Doctor

How to Decode Baby’s Cough

Before you can figure out what to do when baby has a cough, you need to suss out what’s causing it. Knowing the difference between the various types of coughs can help you—and your child’s pediatrician—know what to do next.

What it sounds like: A dry baby cough basically means there isn’t a phlegmy sound when your little one coughs, says Charles Shubin, MD, a board-certified pediatrician with Mercy Medical Center in Baltimore. Baby’s dry cough can irritate their throats, or it can be an occasional cough that doesn’t seem to bother them at all.

What could be causing it: A dry cough often accompanies the start of a cold and can be worse first thing in the morning. It can also indicate allergies, especially if you notice the cough more when your child goes to sleep, as they could be allergic to dust mites, says Gina Posner, MD, a pediatrician at MemorialCare Orange Coast Medical Center in Fountain Valley, California.

What it sounds like: In a nutshell, a wet baby cough means phlegm is involved, Shubin says, and the excess of mucus can rattle around in baby’s chest and cause a gurgling sound. While adults spit these secretions out (loogies, anyone?), babies usually just swallow them, he adds.

What could be causing it: A wet baby cough typically sets in during the later stages of a cold or from a postnasal drip, Shubin says—or it can indicate an infection like pneumonia, which can range from mild to serious. Pneumonia may be accompanied by fever, vomiting, lethargy or difficulty eating and breathing, all of which are signs to call baby’s doctor.

What it sounds like: This is usually a really forceful cough and comes with a distinctive noise. “A lot of times, younger kids will make a typical ‘whoop’ sound when they have whooping cough,” Posner says. They may cough a few times, and then you’ll hear the “whoop” when they breathe in.

What could be causing it: A whooping sound is a solid indicator your child has whooping cough (aka pertussis), which can be serious and is something to flag with your pediatrician right away.

What it sounds like: With this type of baby cough, your child will make a sound similar to a barking seal, Posner says.

What could be causing it: A barking baby cough is the hallmark of croup, an inflammation of baby’s larynx, trachea and bronchial tubes that partially blocks baby’s upper airways and makes breathing difficult. Croup often worsens in the wee hours of the morning (think: 2 a.m.). You can treat croup at home by either stepping outside in the cold air or sitting in a steamy bathroom, but call baby’s doctor if those remedies don’t help.

What it sounds like: Wheezing is a high-pitched whistling sound your child makes when they exhale or cough.

What could be causing it: A wheezing baby cough could be a sign of bronchiolitis (an inflammation of the bronchioles) or asthma, Posner says. Either way, bring the symptom to your doctor’s attention. If baby is struggling to breathe—if the muscles between the ribs are pulling in with each breath, if they’re breathing rapidly (50 breaths per minute) or turning pale or blue—get medical help immediately.

When a baby cough sets in, you of course want to clear it up right away—especially if your little one is uncomfortable. Here’s what you can do to give baby some relief.

The best cure for a baby cough? “Time,” Posner says. And while you’re probably anxious to clear up that cough stat, the reality is you and baby might be dealing with it for longer than you think. “Some studies show that an average length of a cough is 21 days,” she says. For some babies it might get better sooner, but for many, it takes even longer. That doesn’t mean your child is going to be hacking the entire time, but they may still have a lingering cough after three weeks.

In the meantime, there are a few baby cough remedies you can try at home:

• Humidity. Steam can do wonders for a baby cough, since it helps break up the mucus. Run a hot shower until the bathroom has filled with steam, then sit with your child in the room for 10 to 15 minutes. You can repeat this morning and night. You can also run a cool mist humidifier near baby’s bed overnight to keep the air from drying out.

• Cold air. If baby has a croupy cough, exposing them to cold air can also help, Nelson says. Bundle your little one up and go for a walk outside, or even stand in front of your refrigerator’s freezer.

• Nasal suction. You can use nasal saline drops to thin out baby’s mucus and a suction bulb to help clear their stuffy nose—just limit it to four times a day. “Don’t be too aggressive, as it can cause irritation and swelling,” Nelson cautions.

• Chest rub. Applying non-medicated ointments like Vicks BabyRub, which contains fragrances of eucalyptus, lavender and rosemary, to your child’s chest and soles of their feet can help soothe irritation, Schubin says.

• Honey. If your child is one year or older, giving them 2 to 5 mL of honey can thin out mucus, ease their sore throat and help them sleep better at night, Posner says. Honey isn’t a safe remedy for babies under one, though, since it poses a risk of infant botulism.

• Elevation. If baby is coughing at night, try gently elevating their mattress to keep their head above their chest and help clear congestion, Posner suggests. You can place a rolled towel or firm pillow beneath one end of the mattress, but never place loose bedding in baby’s crib.

• Hydration. Make sure baby drinks plenty of liquids to stay hydrated. When there’s enough water in the body, the mucus the body generates becomes thinner, making it easier to clear.

Cough medicines aren’t recommended for babies. Firstly, “a cough is a protective mechanism and is necessary for the child to get better,” Nelson says. “Cough medicines also contain ingredients that make it easy to overdose if you give your child too much.” According to the American Academy of Pediatrics, the risks of using baby cough medicine is higher than the chance it might actually ease your child’s symptoms. In fact, Nelson adds, studies have shown that cough medicine isn’t any more effective at suppressing a baby cough than a placebo.

“If a child is doing all their normal activities—sleeping at night, eating, drinking and playing—you can usually let the cough work its way out,” Nelson says. But if you notice any of the following, it’s time to call your doctor:

Of course, don’t hesitate to call your pediatrician’s office anytime with concerns.

What To Do When Baby Has a Cold