The sniffles and sneezes are never fun, but it’s especially hard to see your little one suffer. Learn how to help baby kick that cold. 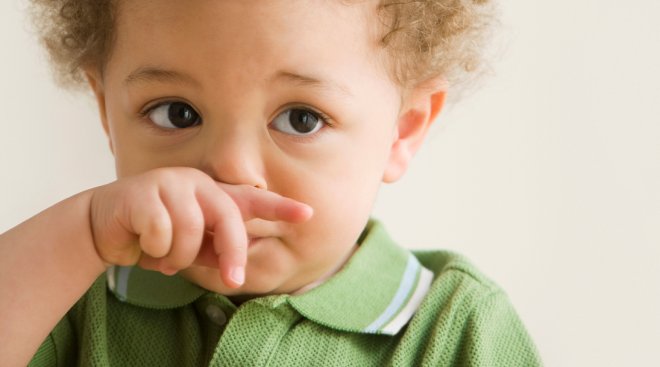 There are plenty of baby firsts to look forward to, from her first smile to her first word. One that isn’t on the list? Her first baby cold. The onset of sniffles can bring about a barrage of questions for new parents: How long do infant colds last? What can babies take for a cold? But don’t worry—most of the time, a baby cold is totally manageable. “It’s very common for babies to get colds,” says Dean Blumberg, MD, FAAP, chief of pediatric infectious diseases at UC Davis Children’s Hospital in Sacramento, California. “Kids less than one year of age will average four to six colds per year, unless they’re in day care, in which case they’ll have more contact with other children and can get even more colds.” Here’s what you can do to ease baby’s cold symptoms and when you’ll need to enlist the help of a doctor.

In this article:
Baby cold symptoms
How long do baby colds last?
Baby cold remedies
When to take baby to the doctor for a cold
Preventing baby colds

We’ve all had colds and can probably rattle off the standard symptoms that tend to plague adults. But an infant cold can affect babies differently, Blumberg says. Here are some common infant cold symptoms.

Baby cold vs other illnesses

So how can you tell if baby has a cold or another illness, like the flu? There are actually a few ways. “The flu typically comes with higher fevers, over 102 degrees Fahrenheit,” says Gina Posner, MD, a pediatrician at MemorialCare Orange Coast Medical Center in Fountain Valley, California. “Your baby can also have other symptoms besides congestion and cough, like vomiting or diarrhea.” Additionally, a baby cold usually has a slower onset than the flu, which tends to start suddenly. At the end of the day, though, the only surefire way to know if it’s a baby cold is to do a nasal-swab lab test at your pediatrician’s office.

How Long Do Baby Colds Last?

The answer varies according to the type of virus that’s causing the baby cold. (For example, the rhinovirus causes a shorter range of symptoms, Blumberg says, whereas the adenovirus leads to prolonged symptoms.) An infant cold usually lasts between three and seven days, he says, but can linger for up to 10 days or longer.

The best remedy for a baby cold? Some good ol’ TLC. “Antibiotics don’t help because baby colds aren’t caused by bacteria, and we haven’t developed effective antivirals except for influenza,” Blumberg says. The most important thing to do when confronted with a baby cold is to prevent your child from getting dehydrated. “Make sure he’s getting enough fluids and that the urine output is adequate,” Blumberg says. (Babies typically wet their diaper every one to three hours, though it’s normal to go half as often when they’re sick, according to the American Academy of Pediatrics.) Beyond keeping baby hydrated, there are a few tricks to easing baby’s uncomfortable symptoms. Keep these baby cold remedies in mind:

Pediatricians generally don’t recommend using any over-the-counter infant cold medicine. “They have an unacceptably high rate of side effects and children can be harmed by those,” Blumberg says. “There’s no evidence they actually make children more comfortable.”

If a fever is causing your child discomfort, Blumberg says you can help lower baby’s temperature with acetaminophen (Tylenol) if baby is 2 months or older, or ibuprofen (Motrin or Advil) if baby is 6 months or older. “Many children can have a fever and aren’t bothered by it. In that case, I wouldn’t bother trying to medicate it,” he says.

Instead of reaching for infant cold medicine, give these natural cold remedies for babies a try:

• Create a steam room. If your child is coughing a lot, bring her to the bathroom, close the door and turn the shower to piping hot until steam fills the room. The humidity will help break up the mucus, Blumberg says.

• Suction baby’s nose. When congestion is making it hard for baby to breathe properly, remove the mucus with a suction bulb: Simply squeeze the bulb to create suction, insert the tip into baby’s nostril and slowly release. Just don’t put other devices up baby’s nose, Blumberg says, since that can lead to injury.

• Try saline nose drops. Sometimes baby’s mucus is too thick to effectively suction out. Break up the mucus first by putting a few drops of saline in baby’s nose and then suction it out.

When to Take Baby to the Doctor for a Cold

You can generally handle a baby cold with the home remedies above—but sometimes she’ll need medical attention. Here are the symptoms to look out for:

• Trouble breathing. “If the child is having difficulty breathing or breathing very rapidly—so actively that he’s sucking in his ribs—that’s a warning sign,” Blumberg says.

• Violent coughing fits. This can be a sign that your child may have something other than a baby cold—like whooping cough, for example, which can be severe.

• High fever. If a baby under 6 weeks old has a temperature of 100.4 degrees Fahrenheit or higher, Posner says, call your pediatrician.

• Signs of dehydration. If baby isn’t wetting his diaper every six hours or so, let your pediatrician know.

Of course, the best way to keep your little one safe is to prevent an infant cold from cropping up in the first place. Follow these tips to help baby stay cold-free:

• Keep sick people away from baby. Remember, colds are contagious. “If someone says they have a slightly scratchy throat or are at the tail end of a cold, they can come visit another time,” Posner says.

• Try to breastfeed. Breastfeeding also helps build immunity, which means your little one is less likely to catch a baby cold.