Fighting the Flu in Toddlers: Expert Tips and Real-Mom Tricks

With science on your side, that nasty bug will hardly stand a chance.
facebook
twitter
copy link
email
save
ByRachel Morris
Updated April 17, 2018 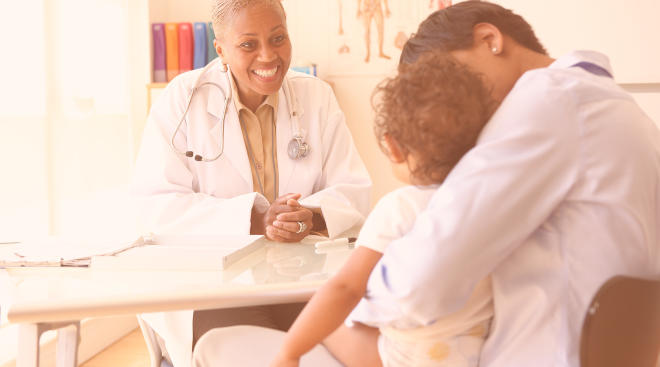 Your little one is complaining of a sore throat and queasy tummy—and a quick check with the thermometer confirms she has a fever too. But has she been hit with the flu or something else? Figuring out the answer to that question will help get your child back on her feet as soon as possible. While most young kids, whether they’re school-aged or just learned to talk, will recover from the viral infection at home without even needing to see a doctor, about 20,000 children under the age of 5 are hospitalized each year due to flu complications, such as pneumonia. To keep your tot safe, read on.

In a nutshell, not fun. Unlike, say, the common cold, the highly contagious flu can affect the whole body, meaning your child is uncomfortable and unhappy. You may also notice that toddlers with flu can go from healthy to ill seemingly overnight, since the flu tends to come on much more suddenly than a cold.

But it’s not always easy to pinpoint the flu in toddlers. “Influenza is often difficult to distinguish from other viral infections—even for health care providers,” says Rachel Orscheln, MD, an infectious disease physician at St. Louis Children’s Hospital in Missouri. If there’s any uncertainty, doctors are able to perform laboratory tests to check for influenza.

Now that your child is more verbal than he was when he was a baby, he can clue you in as to when he first starts feeling under the weather—allowing you to get a head start on treatment. The signs of flu in toddlers and young kids are similar to what you’d experience if you caught the flu. Keep your child home from school if you notice the following kid and toddler flu symptoms:

See your doctor if your child:

There is no magic cure for flu symptoms in kids, but these tips from doctors and moms—along with an extra-large dose of TLC—will help make your child more comfortable while he recovers.

• Try pain-relieving meds. If muscle aches or a fever are making your child uncomfortable, it’s safe to use ibuprofen (like Children’s Advil) on kids 6 months and older, or acetaminophen (like Children’s Tylenol) for kids 2 and up. Remember, aspirin as well as most cough and cold syrups aren’t safe for young children; they’re linked to increased risk of Reye’s syndrome, a rare disorder causing brain and liver damage. Another medicine no-no: antibiotics. “A mistake we can all make is confusing the flu for a bacterial illness and giving an antibiotic, but these don’t make the flu any better,” says Matthew Kronman, MD, associate medical director of infection prevention at Seattle Children’s Hospital in Washington.

• Let your child get rest. “My middle son was 5 and my youngest was about 18 months old when they both caught the flu at the same time. Their fevers were up to 105° F, “ says Jennifer K. “I found that just letting them sleep as much as they needed and trying to keep them hydrated was most effective in keeping them comfortable.”

• Focus on fluids. When Rachel D.’s 3-year-old son caught the flu, she found it really scary to watch her child lose his appetite. “With the exception of Popsicles and water chips, he literally didn’t eat anything for a week and became very frail and emaciated as a result,” she says. But parents shouldn’t worry if their kid isn’t interested in food. “Not getting sufficient solid calories for a few days generally won’t be harmful to healthy children. The most important thing is that they drink plenty of fluids—the goal is to prevent dehydration,” Orscheln says. Clear beverages like water, broth and Pedialyte can help keep your little one’s fluid levels topped off.

In severe cases, you may be prescribed an antiviral for flu symptoms in kids, says Melissa Winterhalter, MD, an ambulatory physician at Nationwide Children’s Hospital in Columbus, Ohio. It can not only ease symptoms and shorten how long your tot is sick for by a day or two, but also reduce the chance of serious complications like pneumonia and bronchitis. Antivirals work best when prescribed within the first two days of seeing flu symptoms in kids.

How Long Does the Flu Last in Toddlers?

It can take about a week or two for your child to completely shake the flu. Your kid will be ready to go back to school once his fever has been gone for at least 24 hours. In the meantime, help keep other members of the family flu-free by disinfecting surfaces and objects that your child comes into contact with and, when he coughs or sneezes, having him do so into his inner elbow or a tissue.

The most important thing parents can do to minimize the chance of flu in toddlers is to bring them to the pediatrician annually for a flu vaccine. Tragically, approximately 100 to 200 children die from the flu each year in the US, but the flu shot could help bring that number down, Kronman says. According to a recent study in the journal Pediatrics, getting the flu vaccination reduces the risk that an otherwise healthy child will die from influenza by nearly two-thirds.

New 2017-2018 recommendations from the American Academy of Pediatrics (AAP) urge parents to schedule flu vaccines as soon as the immunization becomes available, ideally by the end of October. While an intranasal vaccine (which is sprayed into the nose) may be offered near you, the AAP advises skipping it and opting for a tried-and-true injection instead, since the spray didn’t perform well during recent flu seasons.

It’s normal for kids to be afraid of getting shots, but don’t let that stop you from having your child vaccinated. “Distraction techniques, like reading your child a book, talking to her about her favorite toy or having her blow on a pinwheel during the injection can help decrease both pain and anxiety,” Winterhalter says. And even if there are a few tears, the crying will be worth knowing you’re doing your best to keep your little one healthy and safe.