Bump? What bump? Check out the creative ways these 11 stars (and their TV doppelgängglers) disguised their pregnancies early on. 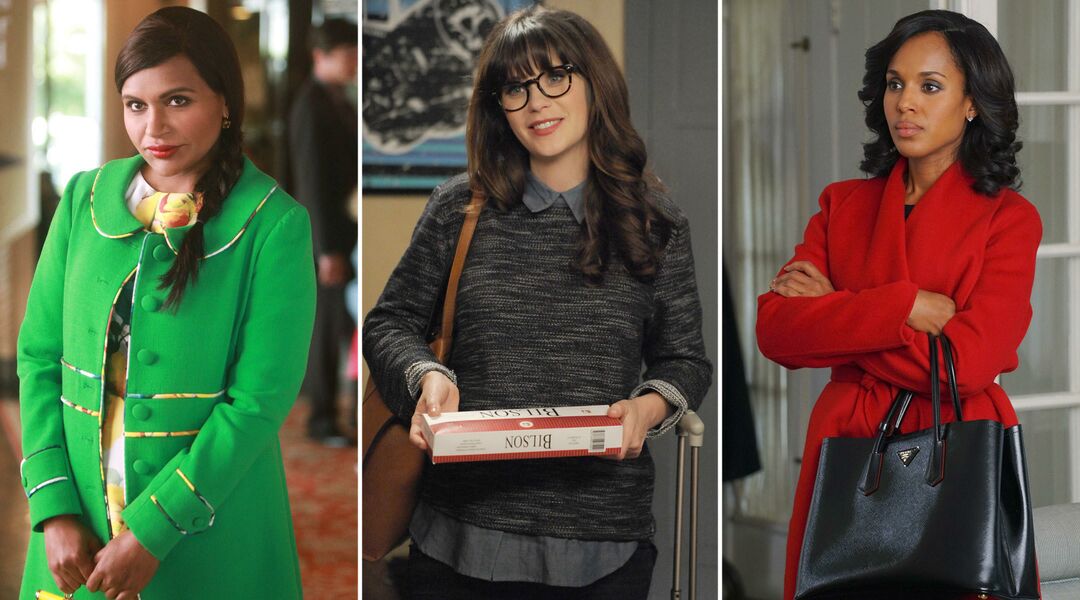 It’s the classic first trimester conundrum: How to hide your pregnancy before you’re ready to break the news? It’s not always easy—just ask any not-telling-yet pregnant woman who’s tried to have dinner with friends and not order a drink. And for celebrities who are constantly in the media spotlight—or playing characters on screen who are decidedly not knocked up—it can be an even taller task. So what’s a woman to do? Get creative. From carrying monster-size purses and pillows to ducking behind desks and potted plants, here are some of the hilarious ways these pregnant celebs hid their blossoming baby bumps.

Real life Kerry Washington was totally fine with the world seeing her pregnant belly. She rocked form-fitting gowns and cradled that beautiful bump on red carpets.The problem? Olivia Pope, her character on the hit TV show Scandal was not pregnant. The solution: A hilarious game of hide-the-bump with giant Prada purses, potted plants, oversized coats and capes, well-placed table lamps and even her co-star’s knee. 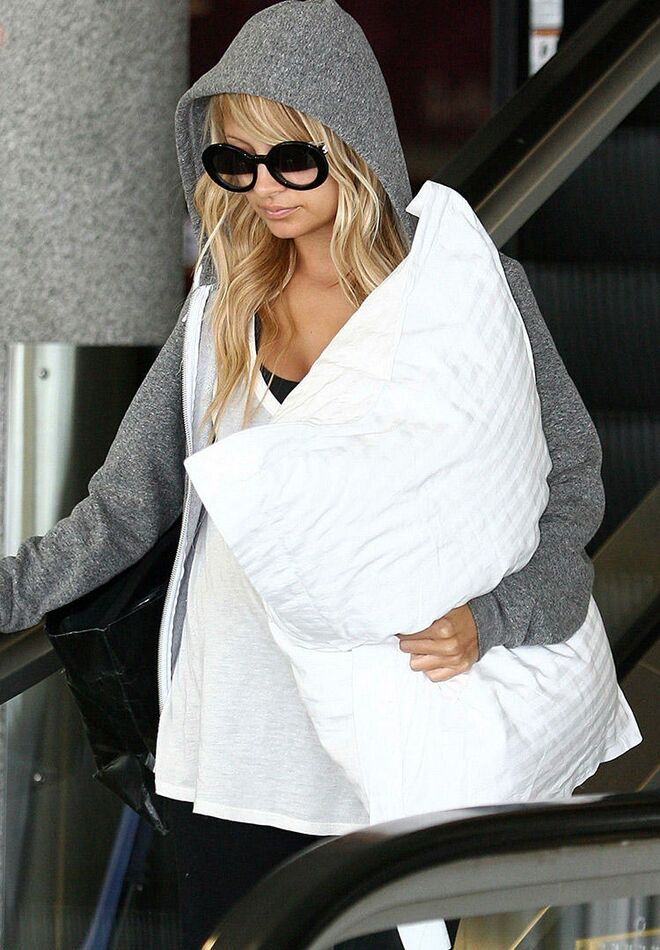 When Nicole Richie was carrying kiddo number one, she kept that blooming bump hidden under a variety of props. Our fave: This puffy pillow she hugged in front of her belly while strolling through an Australian airport. Not weird at all. Nope. Not one bit. 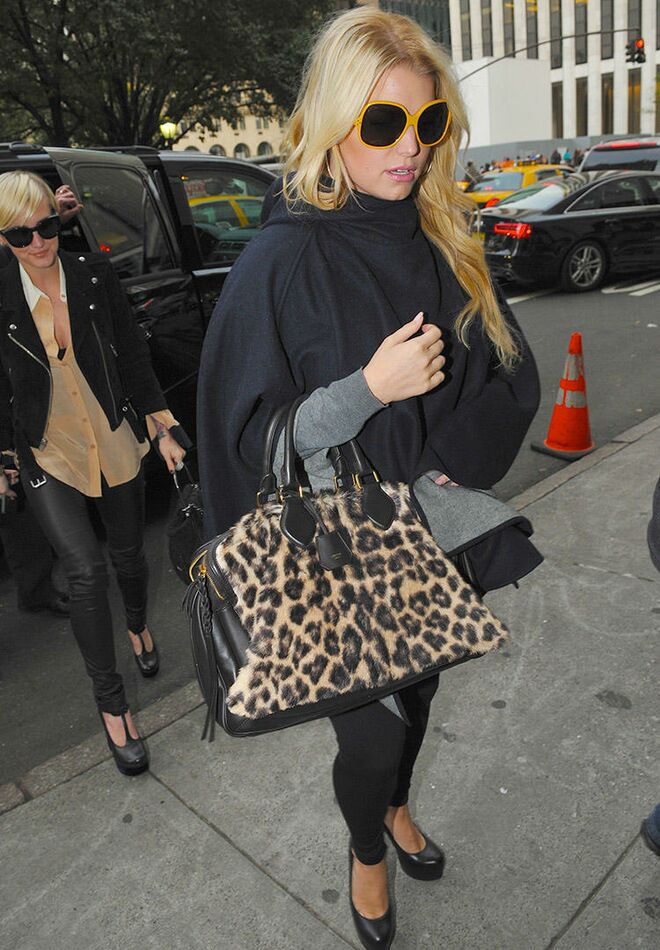 Jessica Simpson has always been a go-big-or-go-home type, as this capture proves. Big sunglasses, big purse, big poncho—all to help distract from one tiny truth: She was pregnant with her first baby! (In fact, just one week after this photo was snapped, Jessica made the big announcement.) 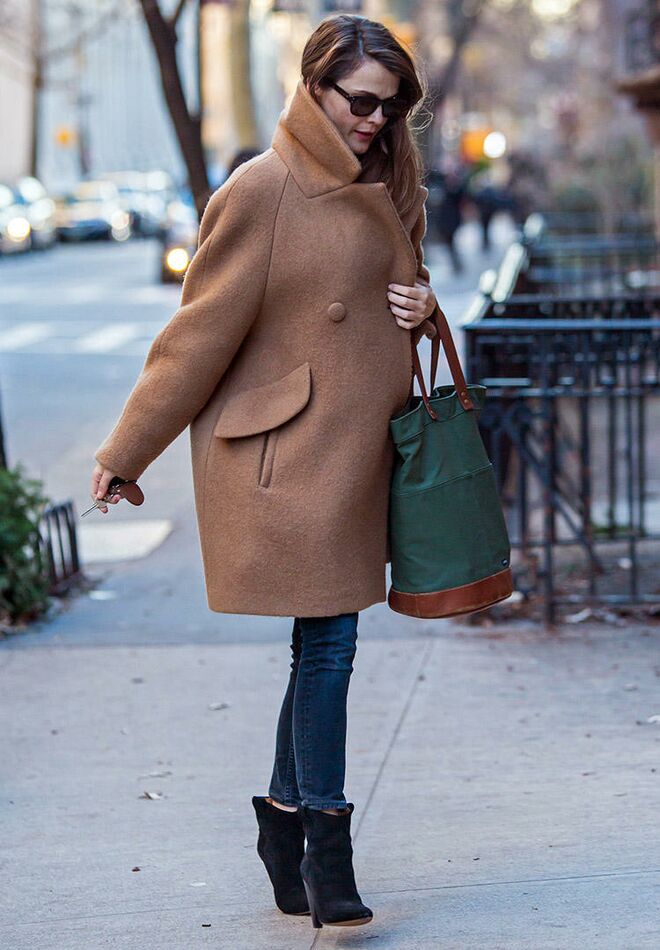 Keri Russell in The Americans

A mid-season baby bump didn’t quite fit into the whole I’m-an-undercover-Russian-agent thing that Keri Russell had going on in the FX drama The Americans. The folks behind the scenes had to drum up some good ol’ fashion concealed-carry strategies: Quick cuts of Keri’s character Elizabeth carting groceries and laundry and sporting the bump-masker du jour: ginormous coats. 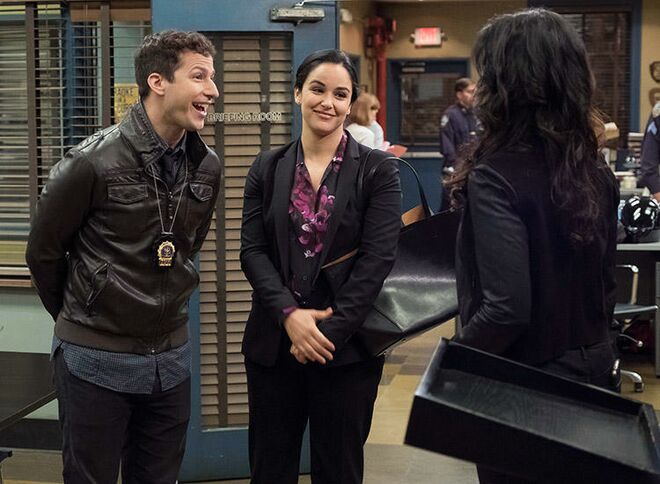 A never-ending load of pesky desk work helped Melissa Fumero’s baby bump stay undercover while she was filming Brooklyn Nine-Nine. What also helped to shield her pregnancy: standing behind massive gift baskets, large bags and her protectively folded hands over her belly. (Because that totally works in real life, right?) 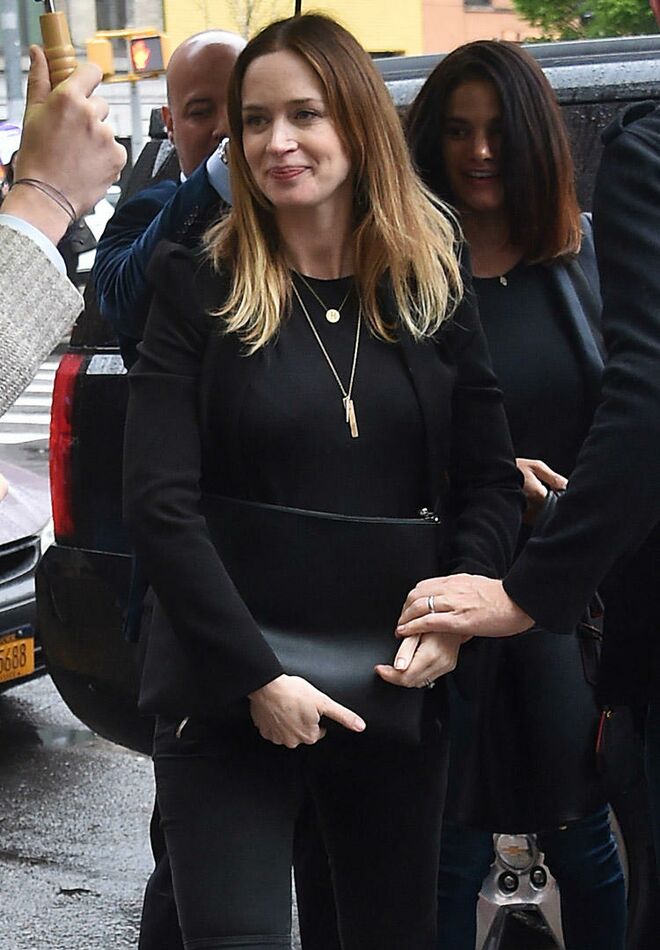 Emily Blunt has had some practice disguising baby bumps on set. When she was filming Into The Woods and pregnant with her first child, she used the set to her advantage, hiding behind every tree she could. Later, when pregnant with baby No. 2, she resorted to off-set props like shopping bags and the go-to of expectant celebs: giant purses. 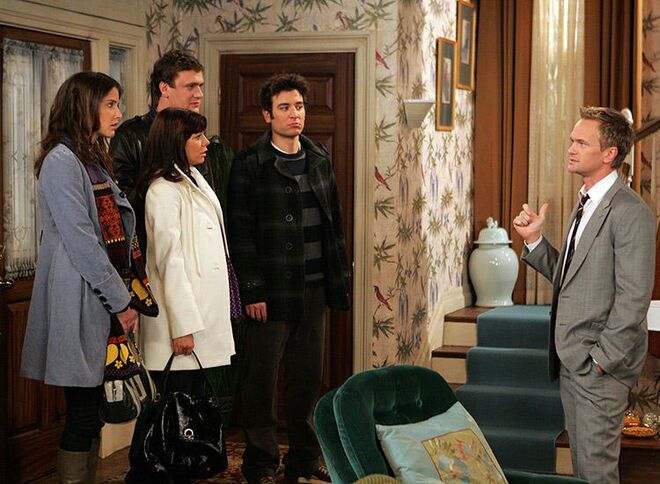 Cobie Smulders and Alyson Hannigan in How I Met Your Mother

When the makers of How I Met Your Mother found themselves with not one but two lead characters pregnant at the same time, hiding the bumps became the joke. Alyson strategically situated herself behind such subtle props as a globe, a basketball and a giant cooler, and even showed off the ultimate food-baby after triumphantly winning a hot-dog eating contest. Cobie? She carted around an awful lot of dry-cleaning that season. 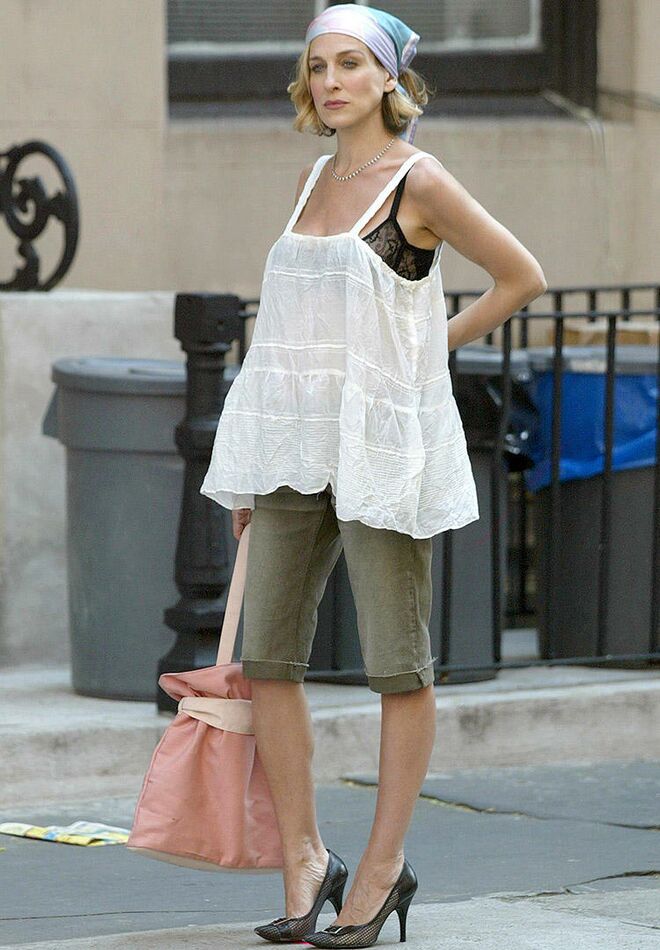 Sarah Jessica Parker in Sex and The City

It was a good thing Sarah Jessica Parker’s character on Sex and The City, Carrie, had a sense of style that evolved daily. When Sarah Jessica was pregnant in season five, she simply gave Carrie’s closet a good shake and wore all of the flounce-y babydoll dresses that fell out. 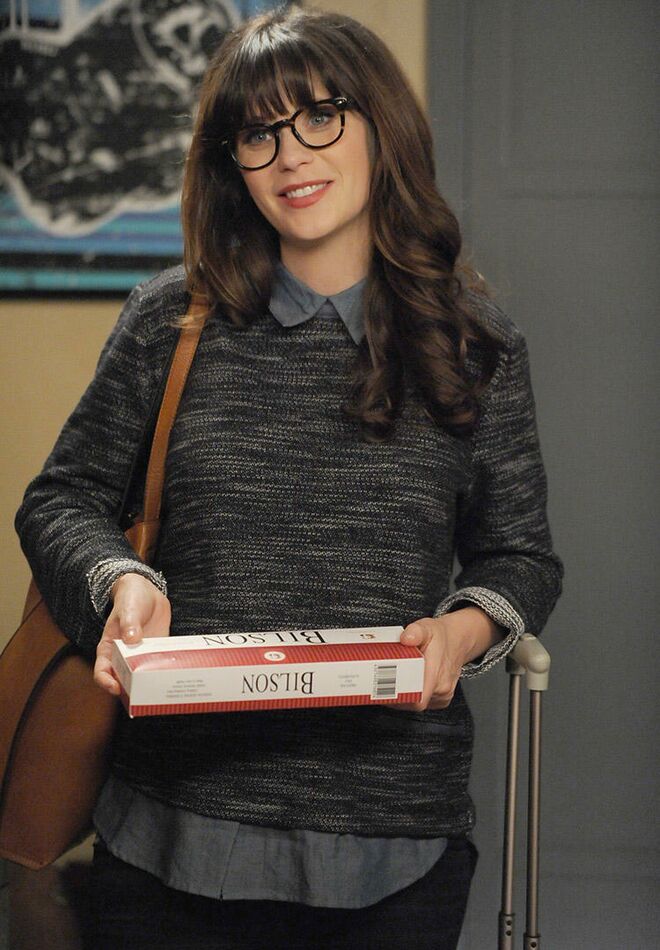 When New Girl star Zooey Deschanel became pregnant, instead of taking maternity leave, her character Jess got jury duty. Smart, huh? But before she took her growing belly to court, the show hid her bump by way of a fall down the stairs. Jess rested her bruised body (and Zooey’s growing belly) beneath bed covers and well-placed pillows. 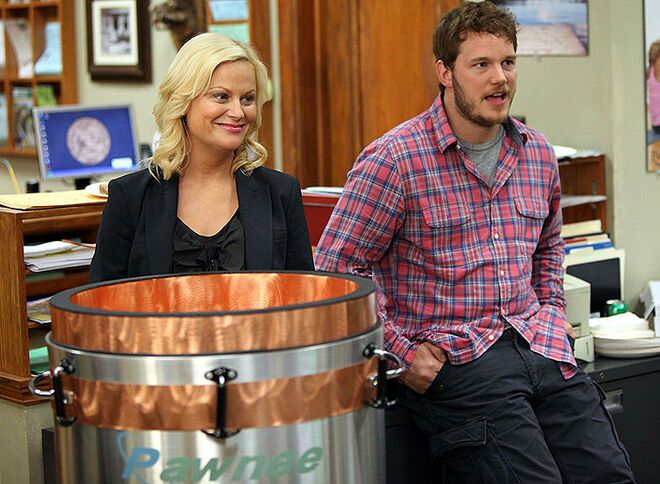 Amy Poehler in Parks and Recreation

When Leslie Knope, Amy Poehler’s character on Parks and Recreation, wasn’t sitting behind her desk, hiding behind a time capsule or wearing roomy suits in season 3, she was making a whole lot of speeches behind big podiums to conceal Amy’s second pregnancy. 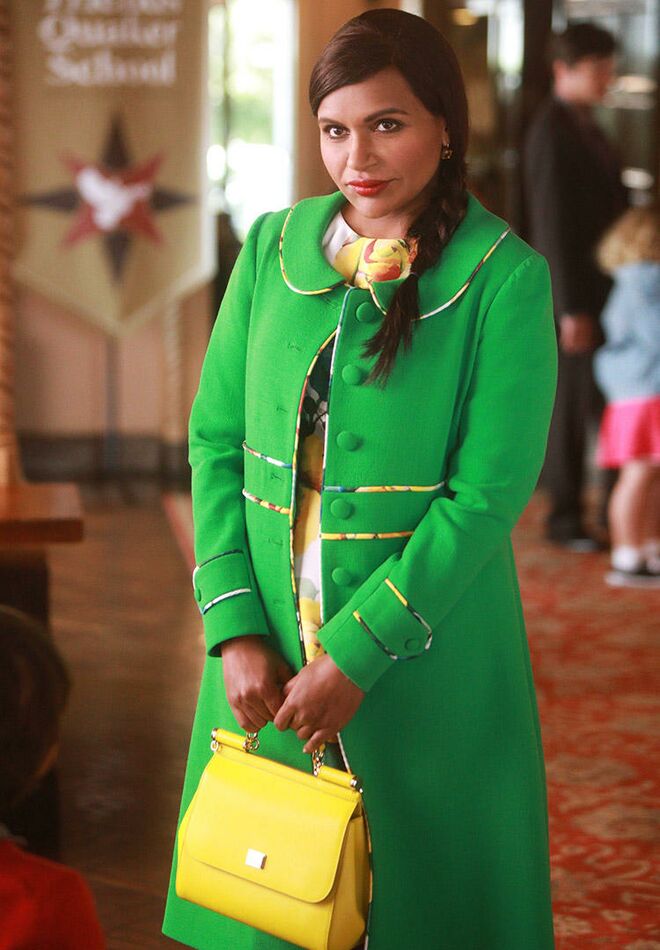 Mindy Kaling in The Mindy Project

The two Mindies can’t seem to sync it up. In season 3 of The Mindy Project, Mindy Kaling’s alter ego Mindy Lahiri was pregnant, leaving the real-life Mindy to sport a fake bump throughout the season. But when season six rolled around, it was Kaling, not Lahiri, who was expecting. The solution? Oversize purses and coats, of course. The 33 Best Maternity and Nursing Bras for Every Need 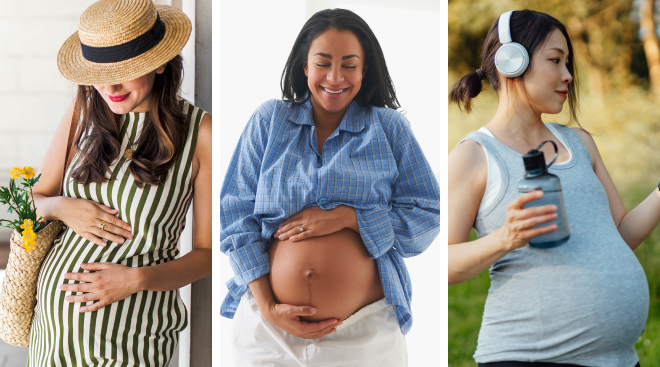 19 Maternity Basics That Will Transform Your Whole Closet The Best Maternity Leggings to Complete Your Pregnancy Wardrobe
ADVERTISEMENT

22 Maternity Overalls That Are Simply Too Cute to Pass Up 44 Maternity Summer Dresses to Stay Cute and Cool This Season

Chic Maternity Wedding Guest Dresses for Every Type of Affair