We chatted with reality star Rosie Pope while she was pregnant with baby number three. 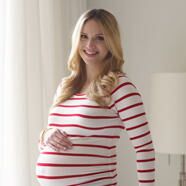 Rosie Pope is a triple threat in the pregnancy world. She’s the star of Bravo’s Pregnant in Heels, has her own fashion line and is the author of Mommy IQ. One early morning before her show, she stopped by  _The Bump _Magazine’s photo shoot and opened up about everything from fertility to maternity fashion.

The Bump: What was it like talking about your fertility journey  on your TV show?

Rosie Pope: I had secondary infertility, so I got pregnant with my first son without a problem. It didn’t work that easily the second time. Everybody tells you it’s like riding a bike: After you’ve done it once, you can do it again. It wasn’t that simple. It took about two years to get pregnant.

Talking about it wasn’t easy, but I think it was therapeutic. I respect people who want to keep things like this private, but I wanted to talk about it so others don’t feel alone. Infertility affects many people.

TB: What did you learn?

RP: I encourage people when they’re thinking of getting pregnant to have the tools to maximize the chances of conceiving. Now I work with Clearblue Easy and their fertility monitors and ovulation sticks. So many women don’t know these tools exist until they’ve gotten to a point of frustration. Get educated on the process early and you can cut down on some of the anxiety.

TB: What surprised you most about dressing your pregnant body?

RP: My yearning for more casual clothes. I love design and dressing up, but when you’re pregnant, a lot of times you want to be comfortable but still look great. During this pregnancy, I’m running around a lot. I wear casual pieces that can translate from desk to dinner. My fashion line really reflects what’s going on with me. Right now, the thing I _have _to wear is heels. The thing I _want _to wear is sneakers!

TB: On a tough day, what’s your favorite pregnancy pick-me-up?

RP: Muffins. I’ve always liked muffins, and when I’m pregnant, I like them even more.

TB: Be honest: Do expectant parents really need your help?

RP: I think everybody on the road to parenthood gets anxious about one thing. Some people get all the gear and equipment. Others want a big baby shower. Whatever it is, they want someone to guide them and help them become a really good parent. Some people have a great support team. Others don’t.

TB: What do parents-to-be obsess about that really isn’t necessary?

RP: Wipe and bottle warmers. You’re setting yourself up for disaster, because there’s going to be a time when you can’t warm that bottle or those wipes and you’re going to freak out. Babies have survived for millennia without bottle warmers and wipe warmers. It’s better to keep it simple.

TB: Have you noticed women getting primped for the delivery room?

RP Yes! With Facebook and Twitter, there are a lot of places where husbands and mothers-in-law can post your picture moments after baby is born. Most of us don’t look so snazzy after hours of labor. So they want people to come in, give them a blowout, a bit of blush, mascara — so they look great in the photos. I don’t think there’s anything wrong with that.

Getting Glam for the Delivery Room