“You chose it, you liked it, you do it. Who cares what anybody else thinks?”
ByNehal Aggarwal
Associate Editor
PublishedNov 2019 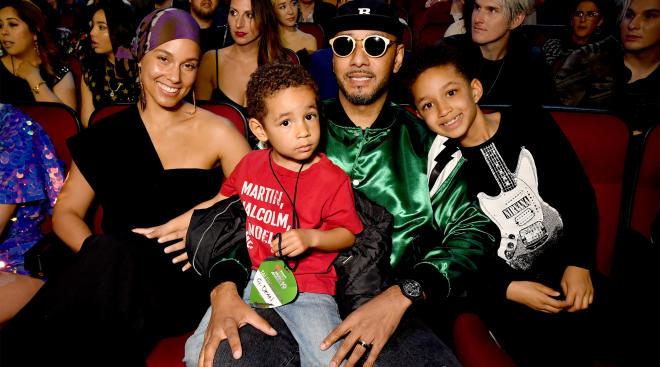 Over the weekend, the singer posted a video to IGTV recounting the events of a trip to the nail son with her 4-year-old son, Genesis. Keys tells her followers that, while in the salon chair, Genesis asked for rainbow-colored nails. But after his nails were painted, he looked at Keys and said, “Mommy, I don’t want this on my nails. People are not going to like it.”

Keys had the best response for her son, telling him, “Look how creative you are. You had this idea, stick with it. You chose it, you liked it, you do it. Who cares what anybody else thinks?” Her son felt better once he learned that other guys also paint their nails and that it wasn’t “some strange thing that only he did.”

However, the interaction made Keys think about the constant judgement we all face, and she took to social media to express her frustration. “Can you believe this? He’s 4, and he already understands the concept that somebody is going to judge him because he chose rainbow colors on his nails.”

She continued, “The way I see it, there is masculine and feminine energies inside us all and that’s just how it is. It gets concerning to me that we can’t just explore these different sides to ourselves and energies that are within us. Even within myself, I often express [the] masculine energy inside of me. It’s very natural to me; that’s how I feel. And for my boy, similar: If he wants to explore the feminine energy that’s inside of him, there’s all these judgements and all these rules and stereotypes and vibes, and it’s really frustrating me. And I’m actually really, really frustrated by it, and I ask myself, ‘Why is that? Why is it that we can’t just express the energies that are inside of us? This is a very normal, ancient, powerful, spiritual understanding. We should be able to explore and express them however we want.”

As more millennials become parents, they’re changing the conversation around gender stereotypes in children. According to research, kids start to learn these stereotypes and link certain objects to them, such as a scarf or a hammer, when they’re as young as 10 months. If you’re curious on how you can help steer your kids away from gender stereotypes before they really start to take root, read our tips.