"We just wanted to say hi Daddy, we miss you and we hope you're having a fun day. Can you say dad?"
ByNehal Aggarwal
Associate Editor
PublishedOct 2020 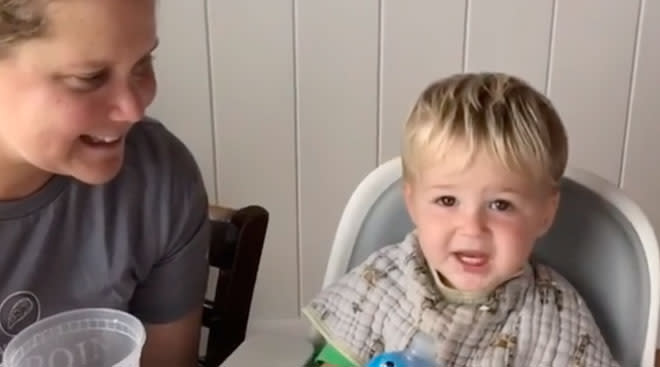 Amy Schumer’s son is becoming quite the talker!

Over the weekend Schumer shared an adorable video of her 16-month-old son Gene saying “dad” for the very first time. “We just wanted to say hi Daddy, we miss you and we hope you’re having a fun day,” Schumer says in the video. “Can you say dad?”

Gene then says the word, eliciting laughs and cheers from everyone in the room. The commotion, however, becomes too much for the toddler and he begins to cry in his high chair.

“This video was clearly a surprise to us. Getting to experience these first moments with my son makes me feel so lucky,” Schumer wrote in the caption of her Instagram post, which also raised awareness for Danroy “DJ” Henry, a student who was shot and killed in 2010 by a white police officer. “I think of my friend Angela Henry’s son. I would like to ask anyone reading this to google DJ Henry,” Schumer wrote.

Last month the comedian shared an equally adorable moment of Gene saying, “mom” while playing with his toys.

However, during an appearance on Ellen DeGeneres’ show, Schumer said neither word was Gene’s first. His first word was actually “car.”

“Actually that is not his first word, I was his second word. His first word is ‘car,’ which definitely hurt both of our feelings,” she explained. “He loves cars. I don’t know, Chris and I don’t care about cars, but he is obsessed. Anywhere we go …he just wants to be in the parking lot, he just wants to look at cars. Which is really convenient because everywhere you go there are cars.”