“I'm definitely going through an emotional roller coaster, but I truly believe in everything happening for a reason.”
facebook
twitter
copy link
email
save
ByNehal Aggarwal
Associate Editor
Published June 26, 2020 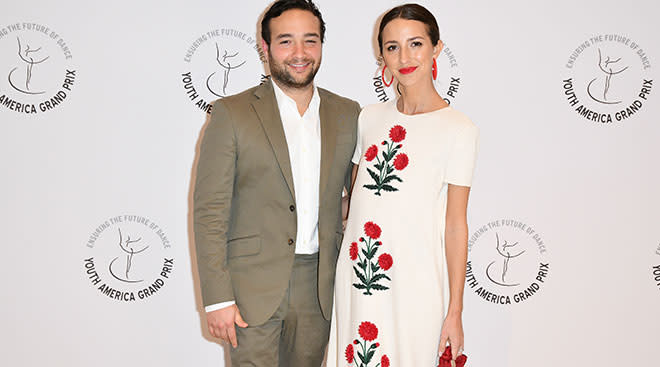 Pregnancy loss is incredibly difficult and challenging—and continues to be stigmatized. More people have been speaking out about their own experiences to combat this, including influencer and Something Navy founder Arielle Charnas.

Yesterday on June 25, Charnas, 33, revealed through her Instagram stories she had suffered an ectopic pregnancy. “I went through something a couple weeks ago that I didn’t share, and it keeps coming up whenever I get comments,” Charnas shared. “All I think about is what I went through and I wish I could talk to some of you about it, so I’m just going to tell you what happened. I was pregnant. I was expecting my third baby and things just went wrong and I ended up losing the pregnancy.”

Charnas, who is a mom to daughters Ruby, 4, and Esme, 2, has previously talked about the possibility of having a third child on her Instagram account, especially since she also grew up with two other sisters.

“It’s been a really difficult time for me. Especially after having two healthy pregnancies, this really just came out of nowhere and was the worst experience I’ve ever been through. I’m definitely going through an emotional roller coaster, but I truly believe in everything happening for a reason,” she continued. “I was in the hospital. That’s why I was away from the kids for a week. But I’m okay. I’m grateful because I’m okay, I’m healthy, I have my two babies. And this just wasn’t meant to be. To clarify, when I say I was in the hospital, it wasn’t just a miscarriage—it was an ectopic pregnancy—but I’m okay. I’m ready to move forward.”

Charnas later shared she was quiet on social media while she was experiencing this, and that she felt alone in her experience because the topic of pregnancy loss is so rarely talked about. She shared the story as a way to help both herself and anyone else who might be grieving.

“There are so many things that I feel that are unclear. I feel guilty for even talking about this right now because I have two kids and there are so many people who are just trying to have one. A part of me feels angry and ashamed, but I definitely do think this is a topic that could be spoken about more,” she said.

Charnas added that she had searched through her followers to see if there was anyone that had gone through a similar experience that might be willing to talk to her. She stumbled upon another influencer, Elizabeth Savetsky, who proved to be incredibly helpful.

“She was my light. I want to be that for anyone else following me who might be scared and feeling alone right now going through this,” Charnas continued.

Pregnancy loss can be incredibly painful and difficult to process. If you or anyone you know has suffered a loss, read through our expert-recommended tips on how to cope and how to support a friend in the aftermath.