There’s nothing like the bond between a mom and her baby.
ByStephanie Grassullo
Associate Editor
PublishedMar 2019 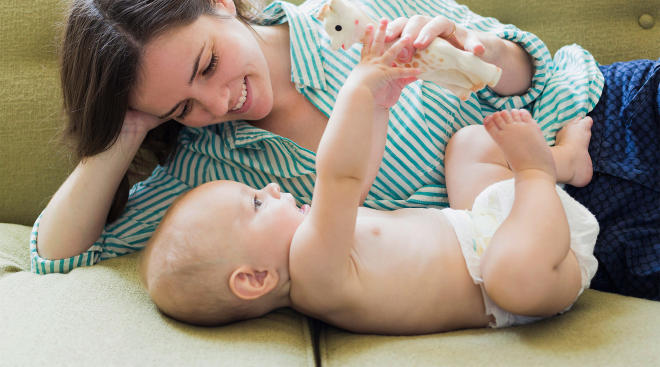 Babies brainwaves “literally sync” with their moms’ brains when they are learning from them through play, researchers suggest in a new study. And how well a baby’s neural activity syncs with Mom predicts how well they’ll learn social cues about new toys being presented to them.

The study looked at how mothers’ emotional responses toward certain toys affected their infants’ decisions to interact with the toys. Infants wearing wireless electroencephalography technology (EEG) would watch their mothers, who were also wearing wireless EEG, show either a positive emotion or a negative emotion toward an object. For positive reactions, mothers would smile and say something along the lines of ‘I like this,’ and for negative reactions they’d frown and say ‘I don’t like this.’ The babies would then choose which object to play with.

Researchers analyzed whether the level of “neural synchrony” between the mother and infant predicted how the infant would respond to a toy. Neural synchrony is when brainwaves from two people follow predictable patterns with respect to each other. Study authors saw social signals, such as eye contact, were associated with increased synchrony and improved social learning.

The study’s authors hope this will not only promote more interactive experiences between moms and their newborns, but shed light on classroom learning, social bonding and developmental disorders that arise later in life.

“I am interested in understanding what happens when parents or children fail to synchronize with each other, which may occur in certain mental health difficulties and developmental disorders, and the impact that this might have on learning and development in the longer term," says study author Victoria Leong.

Moms and babies share a special bond. In addition to being on the same wavelength, a mother’s touch has been proven to heal her baby.