What tune would top your breastfeeding playlist?
save article

Music has long been lauded for its mood-boosting benefits. An uptempo rock song can help you get out of bed in the morning and crush a workout, whereas a slow jazz song can help you wind down for the evening. But could these therapeutic benefits extend to other activities like breastfeeding? In short—yes.

A 2015 and 2020 studyon breastmilk production established that listening to music while breastfeeding helps to reduce stress levels and increase breast milk expression. But what kind of music is best for mom and baby? Scientists believe that music with a beat per minute (BPM) rate close to moms resting heart rate of 71 BPM to 84 BPM provides the best experience for both parties. This is because, as a 2003 research paper suggests, the mother’s heartbeat is imprinted into the brain of developing fetuses. So the steady, calming beat that mimics mom’s heartbeat can help calm and soothe baby.

To make the ultimate breastfeeding playlist, researchers analyzed the average song parameters (BPM, energy, loudness, and valance) of Spotify’s “top 100 tracks for breastfeeding.” The songs with the lowest scores are considered the best and most relaxing. 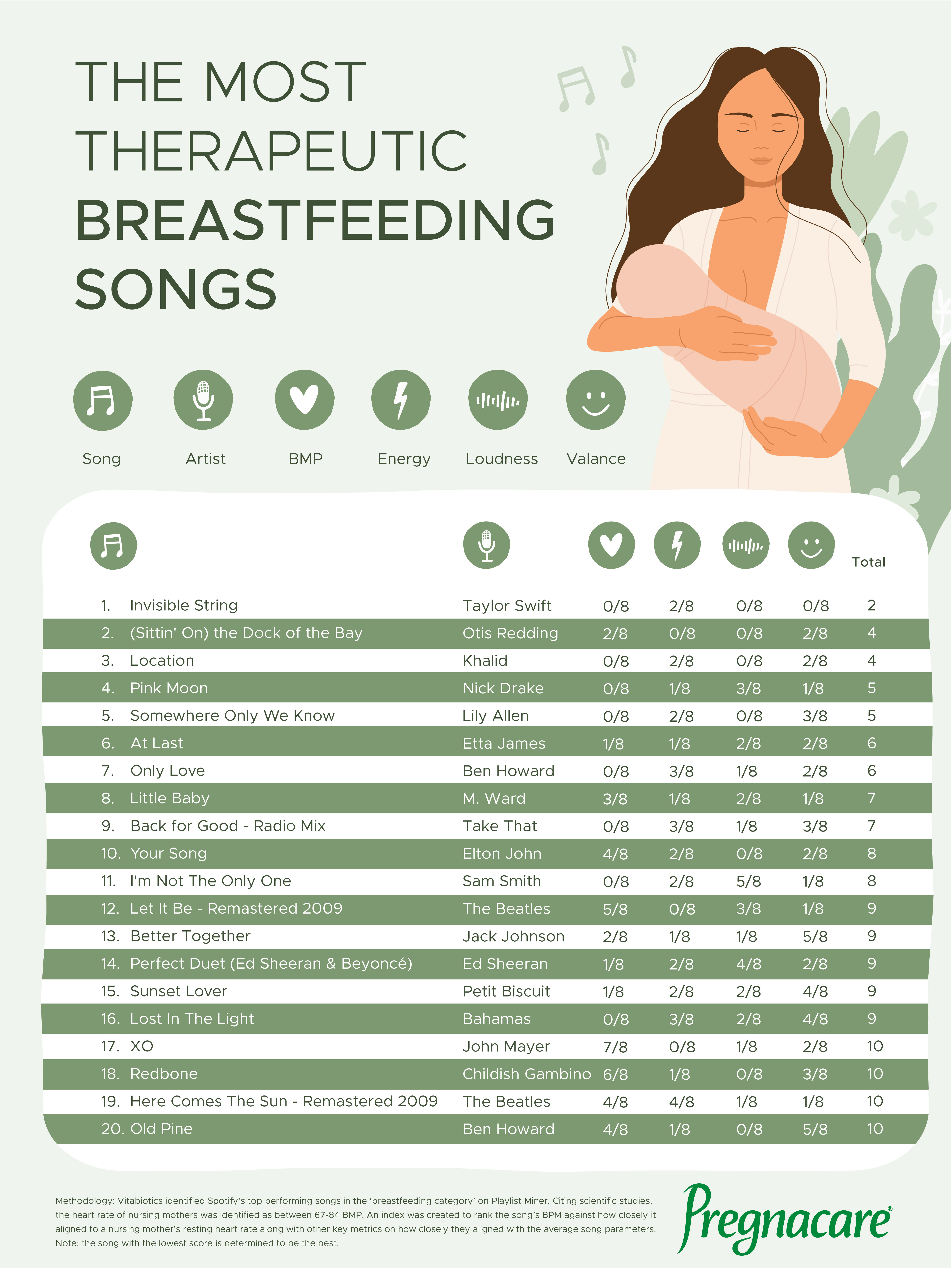 The top song, according to researchers, goes to a crowd favorite—Taylor Swift and her relatively high-energy track “Invisible String”. Despite its seemingly upbeat tempo, the song has an average BPM of 83, which falls just within the resting heart rate average. Researchers do note that this plucky-guitar tune is best listened to at the start of your day.

Otis Redding’s “(Sittin’ On) the Dock of the Bay” and “Location” by Khalid come in as the two second-best songs. Interestingly, the BPM of the Otis Redding song doesn’t fall within the average resting heart rate as it has a faster tempo. However, the other metrics fall in the preferred range, which explains why it is tied for second best.

American musician Jack Johnson and English songwriter Ben Howard with their chilled acoustics, are both featured twice on the top 20. The dark horse on this list goes to Childish Gambino, who tones back his typically upbeat rap music in favor of slower and smoother beats on “Redbone.”

When researchers stepped back to analyze the most common song on breastfeeding lists worldwide, number 19, “Here’s Comes The Sun by The Beatles,” was the people’s top choice. It’s easy to see how this low-energy, laidback tune could be the perfect way to start your day with baby.

You can discover all of the tracks on Pregnacare by Vitabiotics ultimate breastfeeding playlist.

Nursing Olympians May Not Be Able to Bring Their Baby to the Games
Article saved.Go to My Saved Articles
Article removed.