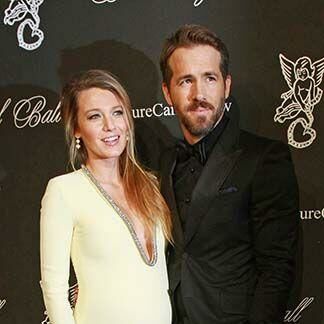 How does she look this good?

Blake Lively made another stunning appearance last night at Gabrielle’s Angel Ball in New York City. Her plunging, crystal-embroidered neckline stole the show at the star-studded event, which honors those who have made significant contributions to cancer research.  The pale yellow, long-sleeved Gucci dress was both bump-hugging and super sexy — two looks we wish would coincide more often.

Monday night marks the first time that Lively graced the red carpet alongside husband Ryan Reynolds since the pair announced they were expecting. He dressed to impress as well; Reynolds sported a black Gucci tuxedo and navy bow tie. (Risky color combo, but he seems to know what he’s doing.)

While we loved to see Lively flying solo last week at the Golden Heart Awards, we love seeing the couple together even more. “Ryan was really sweet throughout the whole night,” an eyewitness told E! News. “He was rubbing her shoulders, putting his arms around her and when Blake got up, he got up.”

What have we learned? Pregnancy can be incredibly sexy, and chivalry is not dead.

Did you pull off formal wear while pregnant?