And it doesn't even have to be exclusive breastfeeding.
ByAnisa Arsenault
Associate Editor
PublishedOct 2017 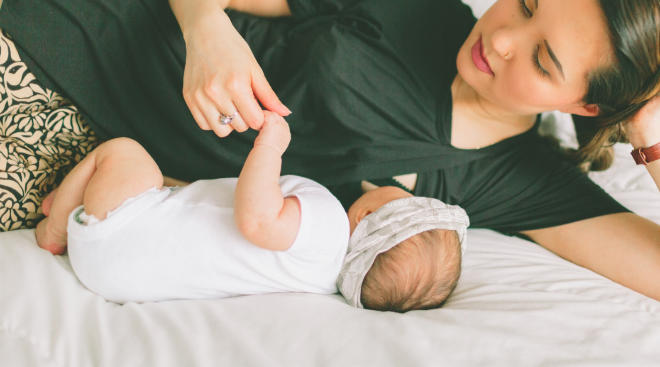 When you think about how to lower baby’s risk of sudden infant death syndrome, your mind probably goes directly to crib safety. And creating a safe sleeping environment is the first line of defense against SIDS. But in addition to keeping a crib clutter-free and placing your infant to sleep on their back, a study says there’s another simple way to reduce their risk: breastfeeding.

This isn’t the first time breastfeeding has been linked to reduced SIDS risk. But the 2017 study was the first time a study determined just how long moms need to breastfeeding for the protective effect to kick in. Researchers from the University of Virginia School of Medicine analyzed eight major international studies involving 2,259 SIDS cases compared against 6,894 control infants. The magic number they landed on? Two months.

“Breastfeeding for just two months reduces the risk of SIDS by almost half, and the longer babies are breastfed, the greater the protection,” says researcher Fern Hauck, MD, of the UVA School of Medicine and the UVA Children’s Hospital. “The other important finding from our study is that any amount of breastfeeding reduces the risk of SIDS—in other words, both partial and exclusive breastfeeding appear to provide the same benefit.”

While research still don’t know exactly why breastfeeding protects against SIDS, they hypothesize immune benefits and effects on sleep patterns may play a role.