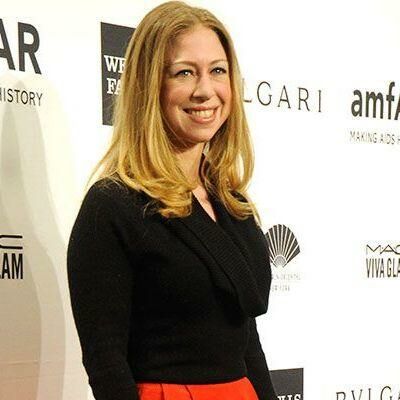 America is about to have a “royal” baby of its own: Chelsea Clinton is pregnant! She and husband Marc Mezvinsky openly spoke about last year about wanting to make 2014 “The Year of the Baby” and start a family, and by golly, they did.

The former first daughter fittingly announced her pregnancy today at a No Ceilings women’s event in NYC hosted by The Clinton Foundation.

According to Politico, Chelsea said, "Marc and I are very excited that we have our first child arriving later this year, and I certainly feel all the better — whether it’s a girl or a boy — that she or he will grow up in a world full of so many strong young female leaders, so thank you for inspiring me and thank you for inspiring future generations, including the one that we’ll be lucky enough to welcome into our family later this year. I just hope that I will be as good a mom to my child, and hopefully children, as my mom was to me.”

Chelsea also tweeted, “Marc and I are so thrilled to be expecting our first child in the fall! Thank you for all of the kind words!”

Hillary Clinton was also at the event and reportedly said that she was “really excited” about having a grandchild.

We’re thrilled for Chelsea and Marc (who wed in 2010) and can’t wait to hear more details about her pregnancy. Using our Chinese gender chart, we predict that it’s a boy about the size of a lime right now based on her due date.

But most importantly: Do you think that Hillary and Bill Clinton will go by “Grandma” and “Grandpa”?