“I can 100 percent understand why the adults who were right there didn't recognize that he was drowning, because when I saw him, I too thought he was just a kid who was playing.”
facebook
twitter
copy link
share
save
ByStephanie Grassullo
Associate Editor
UpdatedJul 2019 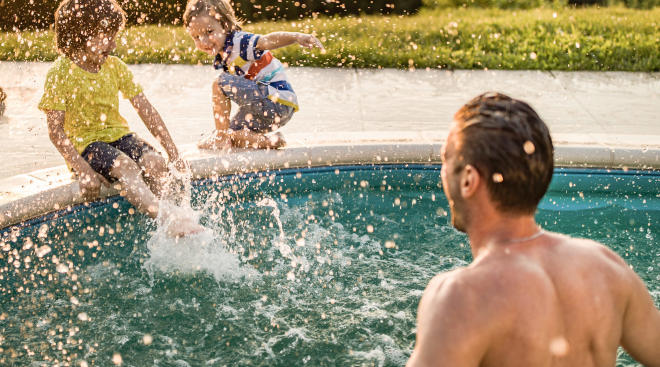 When you hear heartbreaking stories about parents who lost children to drowning accidents, you can’t help but think something like that could never happen to you—your kids are only allowed in the pool with adult supervision. But sometimes, even with adults around, accidents happen. Just ask Maribeth Leeson. The mom faced the worst day of her life recently when her son, Adam, nearly drowned while swimming in a pool. Although there were a handful of other adults around, the boy still managed to slip under the water while out of sight. Thankfully, her son made a miraculous revival, and the mom is now spreading the word on their terrifying experience in hopes of avoiding other tragedies. Warning: Sensitive content and descriptions below.

“My son drowned three days ago. His limp, gray, lifeless body was pulled from the pool and it was every mother’s worst nightmare…I heard screaming, and after a minute realized the screaming was coming from me,” Leeson reocounts.

After CPR was performed on the child by a friend of Leeson, he was thankfully brought back to life. “Then a miracle happened,” she says. “I don’t remember what it was first, but he showed some sign of life because several people at the same time exclaimed ‘there he is!’ and encouraged me to keep talking to him.”

Once Adam was revived, an ambulance came and whisked him away. After spending a few days at the hospital, he was expected to make a full recovery and head home soon. “The reason I’m sharing? This happened in a pool full of people,” the mom remarks.

“A pool full of adults. I’ve read so many stories about kids slipping away from their parents and getting into a pool, to be found drowned shortly later. I’ve never considered the possibility that my child could drown right in front of people who were watching him bob up and down from the bottom of the pool to just below the surface, but didn’t think he was struggling because he looked like he was playing,” she says. “I can 100 percent understand why the adults who were right there didn’t recognize that he was drowning, because when I saw him, I too thought he was just a kid who was playing.”

Here’s what led to scary moment. Adam had gone in the pool without wearing any floatation device. His mom noticed, but was busy getting his little sister’s swimsuit on. She told the boy to stay in the shallow end until she could help him. “I thought it was fine for five minutes, as he could touch just fine in the shallow end. He wasn’t alone because there were multiple adults in the pool, and I’d be right next to the pool getting her suit on,” the mom admits. “Wrong. I have never ever been so wrong.”

Leeson isn’t trying to put the blame on the others who were in the pool, but instead call out just how easily avoidable the situation could have been. “This was 100 percent preventable,” she says. The fault was mine. He’s a big 5-year-old. He has a very needy twin, who makes it easy for me to forget that Adam is still 5 too and has needs that other 5-year-olds [have].”

The mom hopes others walk away with three important lessons from her story. First, make sure kids know not to go in the water without an adult who is responsible for them. Second, know how to recognize the difference between a child who is playing in the pool and a child who is struggling. Lastly, make sure you can perform CPR if an emergency arises. “Please take water safety seriously. I never thought this would be me. It was me, but thanks to God and my dear friend Kristin, my son is still safely here. Learn from my mistakes so it’s not you.”

Parents are always busy with hundreds of different things at one time, but preventing kids from drowning requires the utmost attention. It’s easy to assume one of the adults you’re with is checking on the kids, but what if everyone is under the same assumption? “Tagging” someone whose job it is to keep a watchful eye is a tangible, physical reminder of who’s on the clock. A couple who lost their son to drowning is now devoted to encouraging adults to appoint someone to be a “water guardian” at all times. That person wears a badge and is responsible for keeping tabs on the kids when they’re in the water. That way, there’s never a question over whether someone is watching the kids in the pool.