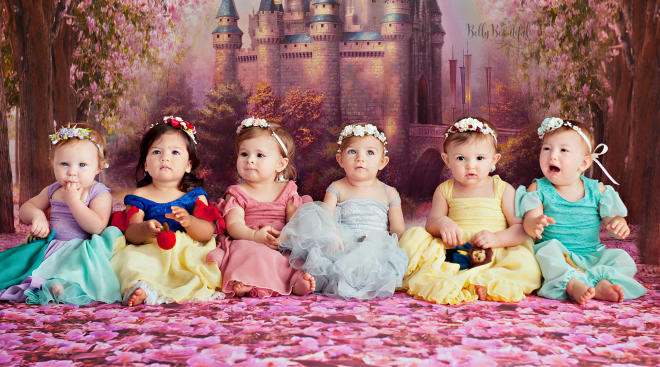 Last year, a Disney Princess-themed photoshoot took the internet by storm. The photo series had it all—magical backdrops, picture-perfect costumes and ridiculously cute newborns—and still, we were all left wanting more. After all, who could possibly get their fill of pint-size Cinderellas and slumbering Snow Whites?

Well our fairy godmother must have been listening, because the babies are back—and this time, the itty-bitty princesses are one year old.

“When we finished the shoot last year, exhausted from photographing six babies at once, my staff and I sat back and laughed and said it will be so much easier next year when they’re all one!” photographer Karen Marie Hourscht tells The Bump. “At that point I knew I was going to do the shoot.”

Her first photo series, in which six babies were transformed into Snow White, Cinderella, Aurora, Ariel, Belle and Jasmine, had over 17 million views on Facebook and ran in more than 50 different news outlets.

“I think last year’s shoot really sent a lot of happiness through a small part of the world last year, and I was just hoping that this could extend those feelings,” Hourscht says.

So one year later, she gathered up the same six children and staged a sequel that, if you can believe it, totally dethrones the first. “It is really amazing to see how much the newborns change in that first year of life,” she says. “From being so small and delicate as newborns to having so much personality, curiosity and joy!”

See for yourself how these beautiful Princesses have grown:

Snow White, from Snow White and the Seven Dwarves

Belle, from Beauty and the Beast

Ariel, from The Little Mermaid