In Time for Christmas, Elf on the Shelf Can Now Have Little Elf Babies

Spying on you isn’t the only thing these elves have been up to.
Save article
ByNehal Aggarwal
Associate Editor
PublishedDec 2019 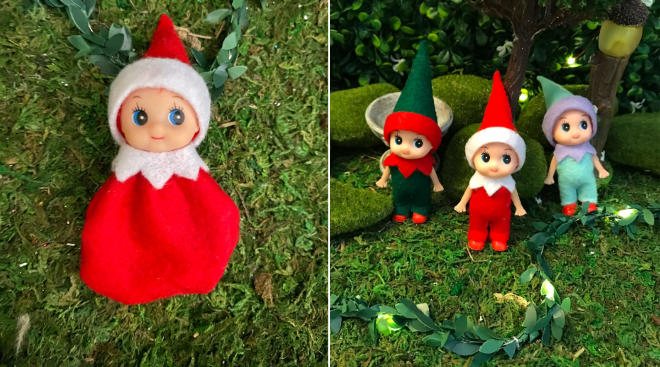 Photo: Courtesy Beyond Art T Mucino / Etsy
We have included third party products to help you navigate and enjoy life’s biggest moments. Purchases made through links on this page may earn us a commission.

Christmas is almost here, which means, if you haven’t already, it’s time to bring out the Elf on the Shelf. But this year, spying on you isn’t the elves’ only responsibility now—they also have to take care of their elf baby.

If you’re not familiar with Elf on the Shelf, it’s basically a Christmas tradition in which Scout Elves help Santa manage his nice list by acting as spies. They “watch” the family during the day and “report” back to Santa in the North Pole at night—only to “magically” turn up in a different spot around the house the next morning.

Now, several retailers are selling little elf babies to add to the family, including Thania Mucino, who owns the shop BeyondArtTMucino on Etsy. Another is Jessica Ruiz, an Illinois mom to four who owns the shop Elf Stork on Etsy. According to TODAY Parents, Ruiz has been selling elf babies for the past three years, selling approximately 700 of them in the 2018 holiday season.

“We had the boy elf and then once Elf on the Shelf came out with the girl elf … she said they needed to get married and have a baby,” Ruiz told TODAY Parents. “And I was like, ‘Where the heck am I gonna get a baby at?!’”

Mucino and Ruiz aren’t the only ones, though. Nicole Blose, yet another Etsy seller, owns the shop Baby Elf Love. According to TODAY, she initially started the idea because her daughter wanted an elf baby for their Elf on the Shelf. The business snowballed from there, and she eventually enlisted the help of her grandparents to expand it. So far this year, she has sold close to 500 elf babies—pretty impressive considering the family business is run out of her home, with her grandma wrapping the babies and her grandpa mailing them out.

In fact, they’re having somewhat of a hard time keeping up with the orders. “The sales are definitely going up faster than I can handle, for sure,” Blose told TODAY Parents. “I’m like, ‘Gram, we gotta wrap them up faster!’”

While the elf babies are undoubtedly cute, they bring the additional challenge of parents now having to move both the elf and baby. Already running out of places to put your Elf on the Shelf? We’ve got some ideas that can help.

Why It’s Totally Okay to Let Your Child Be Bored (So Drop the Guilt!)

30 Cool Piggy Banks for Kids We Put Our Money on

The Magic of Montessori: Life Changing Tips to Declutter Your Child’s Play Space

7 Ways Montessori Promotes Independence (So Parents Can Work From Home)

These Are Amazon’s Top Children’s Books of 2020

Foolproof Last-Minute Holiday Gifts for Everyone on Your List