Teething gels and tablets are off the table.
ByAnisa Arsenault
Associate Editor
PublishedMay 2018 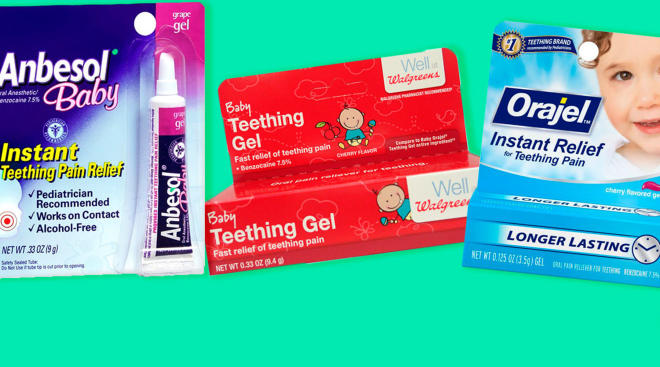 Major news from the FDA: If your infant is teething, stay away from teething gels and tablets. Beyond urging parents to stop using these over-the-counter remedies, the FDA announced that because of the safety hazards and lack of benefit associated with them, they’ll be asking companies to stop selling these products altogether.

This news may sound vaguely familiar. The FDA already advised against homeopathic teething tablets and gels in 2016, including anything marketed as “all-natural.” Now, they’ve extended the warning to OTC brands. The ingredient under fire, specifically, is called benzocaine.

Benzocaine is a pain reliever intended to ease symptoms of teething, sore throat, canker sores and irritation. So it’s found in a variety of products—not just teething remedies—including sprays, solutions and lozenges. The FDA mentioned a couple of brands that use benzocaine:

While benzocaine isn’t particularly harmful to older children and adults, it’s been linked to deadly side effects in kids 2 and under. It can cause a dangerous condition called methemoglobinemia, which elevates levels of methemoglobin in the blood while reducing the amount of oxygen carried through the blood. Anywhere between a few minutes or an hour or two after applying the gel, signs of methemoglobinemia include:

“Given the accumulating evidence regarding benzocaine’s association with methemoglobinemia, we are taking necessary action to work with [the] industry to discontinue the distribution and sale of over-the-counter benzocaine oral health products intended for teething pain, and add warning information about methemoglobinemia and a contraindication against use for teething pain and against use in children under two years of age to the remaining oral health care drug products containing benzocaine,” Janet Woodcock, MD, director of the FDA’s Center for Drug Evaluation and Research, says in a press release. “As part of the action, the agency is also requiring that prescription local anesthetics add updated warnings about their risk of this condition.”

FDA Commissioner Scott Gottlieb, MD, adds that in addition to being potentially dangerous, teething gels and tablets offer no proven benefit to outweigh the risk.

“The FDA is committed to protecting the American public from products that pose serious safety risks, especially those with no demonstrated benefit,” Gottlieb says. “Because of the lack of efficacy for teething and the serious safety concerns we’ve seen with over-the-counter benzocaine oral health products, the FDA is taking steps to stop use of these products in young children and raise awareness of the risks associated with other uses of benzocaine oral health products. In addition to our letters to companies who make these products, we urge parents, caregivers and retailers who sell them to heed our warnings and not use over-the-counter products containing benzocaine for teething pain.”

Any companies that don’t comply will face regulatory action from the FDA and be removed from the market. In addition, the FDA will require all prescription local anesthetics to include standard warning information about the risk of methemoglobinemia.

We have a feeling most companies will comply. After the warning against homeopathic teething remedies in 2016, which were linked to seizures, CVS voluntarily recalled all related products, and major brand Hyland’s ceased distribution.

So what should you do to ease baby’s teething pain? Like the AAP says, stick to massaging baby’s gums or using firm rubber teethers.