The world is your changing table.
Save article
ByStephanie Grassullo
Associate Editor
PublishedAug 2019 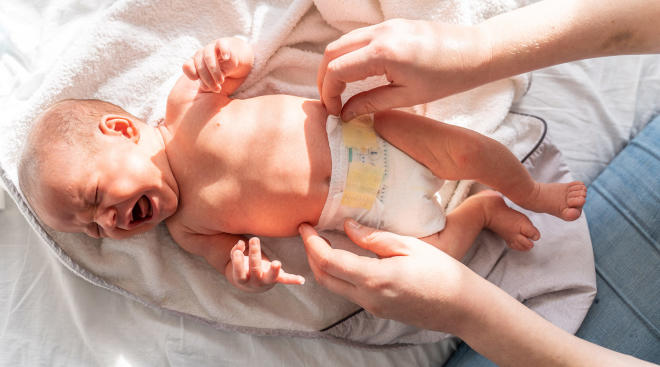 Photo: Ruben Earth / Getty Images
We have included third party products to help you navigate and enjoy life’s biggest moments. Purchases made through links on this page may earn us a commission.

Changing diapers on the go is an art form. Which is why parents love to swap war stories about all of the ridiculous places they’ve been forced to give their kid a diaper change—because bragging rights. Munchkin released a survey with data showing all of the extremes parents have taken to ensure their children have clean diapers, and the results are sure to resonate.

It doesn’t matter if you purposely waited until baby did their business and had a clean diaper before finally heading out to run errands. Your adorable angel will, without fail, have a smelly poop waiting for you the second you park your car and are about to enter the store. You’re not alone. Ninety-four percent of parents have been forced to change diapers in the car, and nearly 60 percent have done so in a store dressing room.

Messy diapers are such a parenting pain, that some moms and dads admit to attempts to pawn off the task to someone else. Nearly a third of parents say they faked a nap so someone else could deal with the dirty diaper, while one in four have used it as the time to leave the house for a fake errand. Shh, we won’t tell!

The survey was conducted as part of the launch of the Toss Disposable Diaper Pails, the latest diapering product from Munchkin destined to make on-the-go changes easier. The five-pack disposable diaper set holds up to 30 newborn size diapers and keeps odors and wetness contained. Plus, the compact design is made just for small spaces.

12 Best Swim Diapers You (and Everyone Else) Will Appreciate