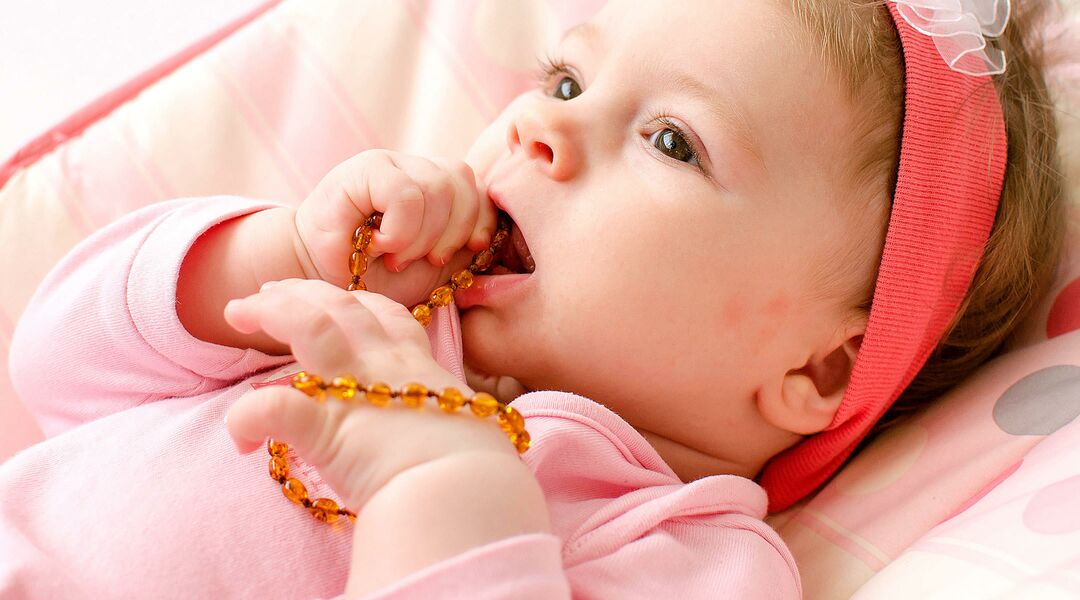 Do Amber Teething Necklaces Work and Are They Worth the Risk?

Is an amber teething necklace really the solution to baby’s painful gums? Don’t buy without arming yourself with the facts first.

Teething can be really tough on parents and babies. Like all tricky stages of development, it doesn’t last forever, but that’s little comfort at 2 a.m. as you scramble around in the dark trying to find a dropped teething toy for the eighth time that night. You may understandably be willing to try almost any solution for those sore gums that have kept baby awake and distressed for the third night in a row.

What Is an Amber Teething Necklace?

First of all, amber isn’t really a true gemstone—it’s actually fossilized tree resin. Most amber teething necklaces are made from either raw or heat-treated and polished Baltic amber beads, which are strung together and individually knotted. Some people believe that these amber necklaces have soothing properties when worn by baby due to the presence of succinic acid, a natural substance that is said to act as a painkiller when absorbed by the body. The highest concentration of succinic acid is in the outer layers of the resin, which is why some people prefer the raw amber teething necklace to heat-treated, which strips away the outer layer of resin during the polishing process.

How Do Amber Teething Necklaces Work?

A common misconception around Baltic amber teething necklaces is that the amber beads themselves are designed for baby to bite on, which isn’t the case. In fact, the amber teething necklace is only meant to be worn by baby so that the succinic acid can be absorbed by baby’s skin. While this key element is indeed present in amber, there is little evidence that it would be released when warmed to baby’s body temperature. And even if the succinic acid is drawn out by baby’s warmth, there is simply not enough of it within the amber teething necklace to successfully pass through the skin and into the body in a large enough concentration to do any healing work.

If the lack of scientific evidence doesn’t put you off, consider this: Possibly the most compelling reasons for putting your wallet back into your purse at this point are all to do with safety concerns.

Many parents recoil from the idea of putting jewelry—especially necklaces—on babies because of choking and strangulation risks. Manufacturers of amber teething necklaces try very hard to persuade potential customers that their products are safe by knotting each bead separately or designing the necklace to snap if pulled too hard, thus reducing the risk of strangulation. Other companies have tried to quell parents’ fear of baby choking by selling amber teething beads to be worn around the wrist or ankle. But, this arguably makes it even easier for babies to grab and pull at the anklet or bracelet and break the thread.

Whatever your view on whether amber teething necklaces actually work, most people agree that babies and jewelry can be a dangerous mix.

In 2010, the Canadian federal public health department released cautionary guidance about amber teething necklaces, and Ireland took an even more assertive line in 2015, with the Health Service Executive referring to amber teething necklaces as being “inherently unsafe.” In 2016, the American Academy of Pediatrics issued their own warning, stating that they advise against infants wearing jewelry of any kind.

But many parents make an exception for an amber necklace for teething. Is that okay? Is it safer to buy jewelry specifically designed for babies? Retailers of amber beads unsurprisingly claim that their products are completely safe if used properly. Despite these claims, you should be aware of the safety concerns of an amber teething necklace.

There are so many alternative teething relief options that you can provide for baby without the risk that an amber teething necklace carries. From over-the-counter preparations to homespun natural remedies, there’s something out there to suit your child that comes with no dangerous risks attached.