From their tiny front teeth to their backmost molars, get the scoop on baby’s ever-evolving smile.
Save article
ByKorin Miller
UpdatedJun 2020 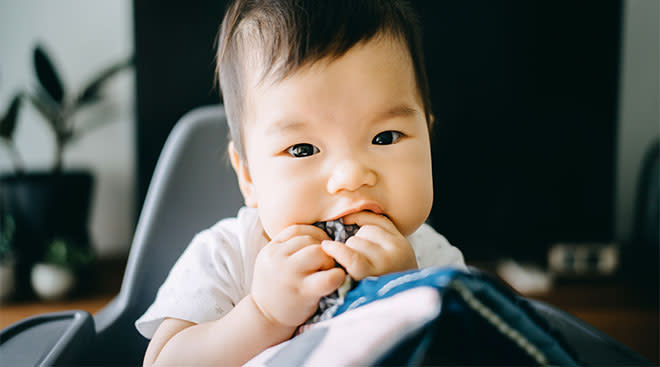 Snap as many pictures of baby’s adorable gummy grin while you still can. Those little teeth will crop up in the blink of an eye—and you’ll sure know when it happens. Teething can be pretty uncomfortable for babies, and they’ll express it the only way they know how—by fussing and crying and not sleeping.

If baby is showing signs of fussiness, you may start wondering if the time for teething has arrived. So when do babies start teething? The truth is, every baby is unique. Still, there’s a general time frame—plus a few important things that all moms should know to make the process easier.

In this article:
When do babies start teething
How to tell if baby is teething
How long does teething last?
What a baby teething chart can tell you
What’s late teething?

When Do Babies Start Teething, Exactly?

Babies usually start getting their primary teeth between 3 and 6 months old, says Mark S. Wolff, DDS, PhD, a professor of cariology and comprehensive care at the New York University College of Dentistry in New York City. But it’s quite possible that it could happen later too. In fact, some babies may not get their first teeth until as late as a year old, says Whitney Schutzbank, MD, MPH, a pediatrician at the MassGeneral Hospital for Children in Boston.

Genetics play a significant role in determining teething age, says Jeffrey Bourne, MD, a pediatrician at Providence Saint John’s Health Center in Santa Monica, California. “It tends to run in families,” he says. “Some families have teeth that come in early, some not until later.”

How to Tell If Baby Is Teething

During the teething process, the tooth pushes up through the bone and then the gumline. It’s no wonder it hurts! So the answer to “when do babies start teething?” for your child is most likely when you start spotting a combination of the telltale teething symptoms. These include:

For more details, check out our post on teething symptoms and remedies.

How Long Does Teething Last?

There’s no clear-cut answer to this question, just as there isn’t one for the question “when do babies start teething?” But in general, babies will grow new teeth every four to six months, and they’ll usually have their complete set of baby teeth by around 24 months, Wolff says.

How long does teething pain last?

Good news! Not 24 straight months, even though it takes that long for all the teeth to come in. That’s because the pain flares up only when the teeth are actually breaking through the gums, and it subsides between episodes. So the severe symptoms usually last just a few days, Schutzbank says. What’s more, children tend to get used to the process over time, according to Bourne. While the symptoms are obvious with the first tooth or two, they become milder as baby’s mouth fills in.

What a Baby Teething Chart Can Tell You

It’s hard to know exactly when babies start teething, but the order in which baby’s 20 teeth will come in (or “erupt,” in dental lingo) is pretty predictable. As you see from the chart below, the first teeth to break through baby’s soft gums are the middle teeth (central incisors)—you’ll notice the two bottom ones first, followed closely by the two top ones. The next to crop up are the adjacent teeth, and the process continues to work its way toward the back of the mouth, with the molars surfacing last. Baby’s gums are ingeniously rigged so both the upper and lower teeth come in right and left pairs. “The order supports tooth and jaw growth and helps provide for straight teeth,” Wolff says.

Want to keep track of baby’s progress? Print out our handy teething chart.

Babies are considered late teethers when they reach their first birthday and still have no teeth, Schutzbank says. If that’s the case, talk to your pediatrician. They can assess the situation during your child’s well visit and may suggest a mouth X-ray if there’s any concern.

Whitney Schutzbank, MD, MPH, is a pediatrician at the MassGeneral Hospital for Children in Boston. Her clinical interests lie in newborn medicine and nutrition. She earned both her medical degree and master’s of public health degree from Tulane University School of Medicine.

Jeffrey Bourne, MD, FAAP, is a pediatrician at Providence Saint John’s Health Center in Santa Monica, California, and has been practicing for more than 20 years. He earned his medical degree from the University of Washington and is a fellow of the American Academy of Pediatrics.