We feel your pain—teething can be tough on babies and parents! Here’s what can help (and what might hurt).
Save article
ByKorin Miller
UpdatedMay 2020 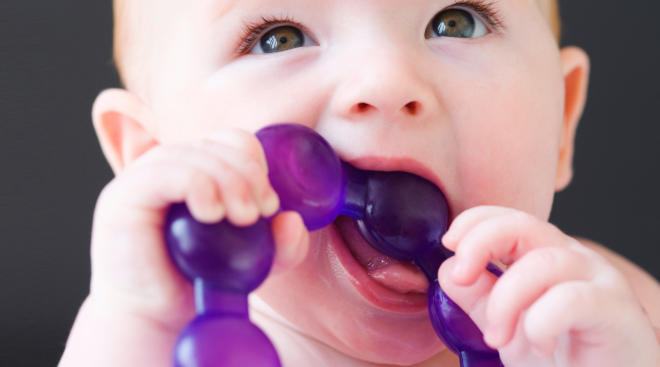 Just when you thought you had a routine down pat and even some semblance of a good night’s sleep, a teensy tooth starts poking out from beneath the surface of baby’s gums—unleashing the sort of outsized mayhem that can make grown men and women cry (or at least something close to it). And you can’t help but wonder maybe that’s why dentists refer to baby teeth as “erupting” instead of “coming in.”

When baby starts teething, he can be cranky and irritable. Sleeping is often a struggle, even if he was a good sleeper in the past. Unfortunately, it’s a process that can last as long as a year (sorry). That’s because babies’ first teeth usually start to emerge around 4 to 6 months of age, but teeth can also come in as late as 12 months, says Whitney Schutzbank, MD, MPH, a pediatrician at the MassGeneral Hospital for Children in Boston. (Fun fact: Some babies are even born with a tooth in place, says Jeffrey Bourne, MD, a pediatrician at Providence Saint John’s Health Center in Santa Monica, California.)

Luckily, there are options to help ease the pain. From teething remedies at the drugstore to natural teething remedies, there are plenty of choices—and one is bound to bring some relief to baby and the rest of the household too. Even if it’s just for a quiet few minutes.

In order for any teething remedy to work, you have to make sure your child is, in fact, suffering from baby teething pain. Obviously, this isn’t always easy, since baby’s crying can mean anything from “My gums hurt!” to “My belly aches!” But there are a few signs that, when taken together, can point to teething, our experts say. These signs of teething include:

If you notice teeth popping up without any teething symptoms, don’t worry. (Heck, rejoice!) There’s nothing wrong with baby, Schutzbank says. Some children simply have no signs of teething and their teeth just come in.

A slightly elevated temperature is among the top teething symptoms, and doctors aren’t sure why this happens. However, if baby’s temp sneaks above 101 degrees, call your pediatrician, Schutzbank says—especially if it lasts for more than a day or two. In that case, the fever probably isn’t due to teething but something else, such as an ear infection or urinary tract infection (UTI).

How Long Does Teething Fever Last?
Teething fevers typically last for about two to three days, Schutzbank says. Call your doctor if baby’s fever lasts longer than that.

The only thing worse than suffering from dental pain yourself is seeing baby suffering from it— and that can send you running to the drugstore for all the baby teething relief products you can find. But the reality is, not everything touted as teething remedies is actually good to use for baby (see “What Not to Do for Teething,” below), which is why it’s important to understand how to soothe a teething baby safely. The one exception among drugstore teething remedies—and only if the non-medicated teething remedies listed below don’t work—is Infants’ Tylenol. You can use it if baby isn’t soothed by other methods, Schutzbank says.

Natural teething remedies (those that don’t involve ingesting any medicine) should be your first course of treatment. Babies usually like to gum on things when they’re teething, Bourne says, so many of these best teething remedies are those that baby can chew:

• Teething toys. These can be chilled in the refrigerator or freezer and pulled out for baby when he needs them. Teething necklaces can also be worn by parents so baby has a teething toy to chew on when being held.

• A wet washcloth. Just like toys, put it in the fridge or freezer until you need it.

• A pacifier. “Some children like sucking when teething,” Schutzbank says.

• A teething biscuit. This is best for older children who are already on solid foods, Schutzbank says.

What not to do for teething

Some so-called teething remedies can actually worsen the pain for baby or even harm her. Here are the biggies to avoid. If you come across any other teething remedies you’re unsure about, it’s always best to ask your doctor before giving them to baby.

• Numbing gels. These can numb a baby’s throat and lead to choking or aspiration of liquids into their lungs, Schutzbank says.

• Homeopathic teething tablets. These aren’t regulated by the Food and Drug Administration and often contain potentially dangerous ingredients, such as belladonna, a potentially toxic ingredient.

For more information check out The Bump’s tips on teething symptoms and remedies: