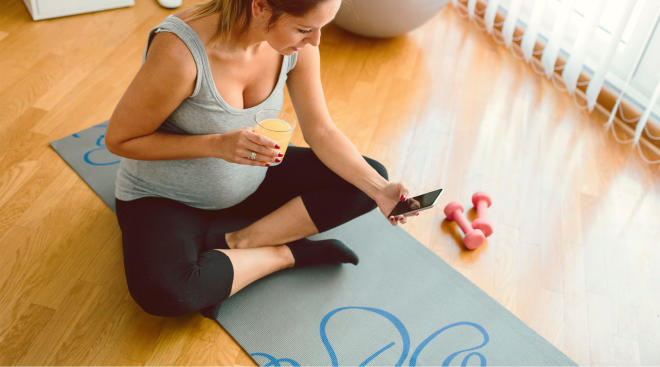 For many fitness gurus, exercising during pregnancy means adjusting workouts so they are not quite as intensive. Although you and your doctor know what workout is best for baby, that doesn’t stop your Fitbit from constantly reminding you that you haven’t reached your steps yet, or your smart scale from badgering you about weight gain.

It’s a daily annoyance science and tech journalist Swapna Krishna wants to fix. She recently shared her frustrations on Twitter, calling on tech developers to create a pregnancy mode within their apps. Amassing more than 2,000 retweets and 14,000 likes, the thread received a lot of traction from pregnant women and tech companies alike.

“Hey tech developers: It’d be really nice if you put a ‘pregnancy mode’ in your weight/training/workout etc. apps. I’m getting really tired of my smart scale and exercise apps yelling at me for weight gain/decreased activity,” she shared.

Krishna explained how her exercise regimen is slowly changing, and fitness goals she used to meet are no longer possible for her with baby on the way.

“My @apple Watch is reminding me daily about my fitness goals. I was meeting them until about two weeks ago, now it’s a lot more difficult,” she says. “No way to pause the notifications, I have to turn them off entirely.”

After some questioned whether or not a pregnancy mode should simply shut off notifications, Krishna quickly slashed those suggestions.

“Getting a lot of questions re: ‘well, should pregnancy mode just shut off notifications?’ No,” she says. “I want to be able to track my weight gain during pregnancy and whether or not it’s healthy!”

And it’s not just workout apps. Krishna shares the many “myriad ways” apps have failed people who are pregnant or nursing.

“Apps that literally fail half the population aren’t successful apps,” she points out. “Doesn’t matter if you’re in startup mode—men shouldn’t be the default.”

Her tweets opened the door to an entire conversation discussing apps needing an upgrade to better suit pregnant women, including sleep and period trackers. Countless others were able to relate to Krishna’s woes, and chimed in with support.

As the saying goes, ask and you shall receive. After her tweet went viral, a ton of tech companies reached out to the soon-to-be-mom inspired by her thread.

Hopefully developers use this as a wakeup call to add some much-needed adjustments for moms-to-be who are just trying to stay healthy for baby. After all, there are so many benefits associated with exercising during pregnancy.