“We have an identifiable feature. We can tell we’re human beings, so you first start with someone’s humanity and that is step number one.”
Save article
ByNehal Aggarwal
Associate Editor
PublishedJul 2020 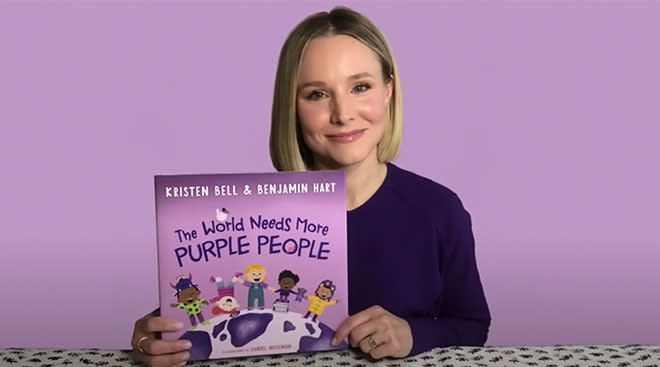 Photo: Random House via YouTube
We have included third party products to help you navigate and enjoy life’s biggest moments. Purchases made through links on this page may earn us a commission.

Kristen Bell recently co-authored a children’s book, The World Needs More Purple People, and now the actress is speaking up on the inspiration behind it.

The mom of two states the book teaches the importance of finding “common ground” and looking at all people as people. While critics have said the book teaches “colorblindness,” Bell, 39, says it does not shy away from issues of color and race that have been a part of larger national conversation in the past few months.

“Some people interpreted that as trying to say it was colorblindness, which I want to be really clear it is not at all,” Bell said during a remote interview on TODAY. “When I say find sameness or common ground, I mean look at each other as human beings, right? We have an identifiable feature. We can tell we’re human beings, so you first start with someone’s humanity and that is step number one.”

She continued, “And the second step is absorbing all these differences that create us, that provide the beauty within all of our human race and each individual culture. But I personally think you’ve got start with looking at everyone’s humanity and then you can say, ‘OK, now let’s see what makes you uniquely you and me uniquely me and figure out how we can do it together.’”

The book, Bell explained, was actually written two years ago as a way to help kids’ navigate the deepening and polarizing political divide, which she felt they were absorbing. While there are themes of current events included in the book, it originally aimed to help give young readers language to help them understand the divide. Purple people, she says, are those that ask questions, laugh a lot, use their voice to speak up and are “uniquely themselves.”

“Red plus blue equals purple and that is our idea of a purple person. We wanted to create a sort of road map to social identity for our kids that would help them navigate all the divisiveness they were digesting, even subconsciously,” Bell said. “Really, this book is trying to point kids towards their fellow humans and see friends rather than enemies and look at character while celebrating all of our differences.”