“Meghan, we’re sorry the world didn’t say it sooner...we promise to stand with you every step of the way.”
Save article
ByNehal Aggarwal
Associate Editor
PublishedOct 2019 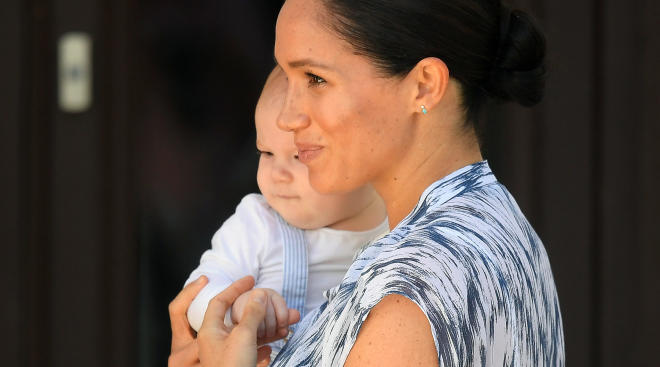 Being a new parent is downright hard. You’re tired all the time, and you constantly wonder if your parenting decisions are right for baby. In an interview with ITV last week, Meghan Markle revealed that as the Duchess of Sussex she’s struggling with the pressure she’s faced both as a royal and as a new mom. (Remember when mom-shamers criticized her for the way she held baby Archie?)

Her message resonated with moms everywhere, and they took to social media to voice their support—including Peanut, an app that helps moms connect with each other with a single swipe (earning itself the nickname “Tinder for moms.”) On its Instagram, Peanut issued a public apology to Markel on behalf of moms everywhere.

“Dear Meghan, When you married Prince Harry, you joined the Royal Family. But when you became a mom, you joined a global family of women connected by a common bond: motherhood,” the letter states. “We’re a family that stands together in moments of good and bad, joy and heartbreak…Meghan, you are now part of our family…We’re sorry the world didn’t say it sooner. Didn’t say it with compassion. Didn’t say it loud enough to drown out all the other noise…Welcome to the Motherhood Family. We might not have castles, but we raise kings and queens. And we promise to stand with you every step of the way. Love, Your Peanut Family. #WeLoveYouMeghan.”

The post already has thousands of likes and hundreds of comments, with moms voicing their support. “This is absolutely, without a doubt, the most beautiful love letter to a stranger and yet someone from the same tribe of motherhood. Bravo!” one person commented.

Another shared her own experience, writing, “I’m glad the spotlight is on this issue; I’ve had such a hard time myself transitioning to motherhood. It’s not talked about enough, and I just assumed it was something that I would magically inherit once baby was born. SO not the case. It’s been a struggle every step of the way, even with the whole world supporting you it can still feel so lonely. This needs to be shared with EVERY mother, current and future, so they know it’s going to be hard and that is okay.”

Peanut shared another woman’s response in a separate Instagram earlier this morning. “I just want to thank Meghan Markle for saying she’s not OK instead of some fluffy PR response,” she wrote in a tweet. “The ideas that women can do it all, mothers are superheroes and parenthood is obvious are so hurtful, ignorant and damaging to women. We’re not OK. Millennial parenthood is f**king hard.”

Celebrity women have also taken to their own social media to support the Duchess of Sussex. Katie Couric posted a clip from Markle’s interview to her instagram on Sunday, stating in the caption, “This video of Meghan Markle shows how honest she is about the strain of so much public scrutiny, especially when you’re feeling vulnerable. I really like her. She seems really cool and I think people should leave her alone.”

Markle’s tearful interview, which has been making rounds all over the web for its honesty and vulnerability, premiered in the UK on Sunday, October 20, as part of Harry & Meghan: An African Journey, an exclusive documentary that gives an inside look at the royal couple during their recent tour of South Africa. During the interview reporter Tom Bradby asked Markle if she was doing okay, to which she candidly opened up about the media pressures she’s had to face as a newlywed and a new mom.

It’s definitely not easy, but moms everywhere are rooting for you, Meghan!