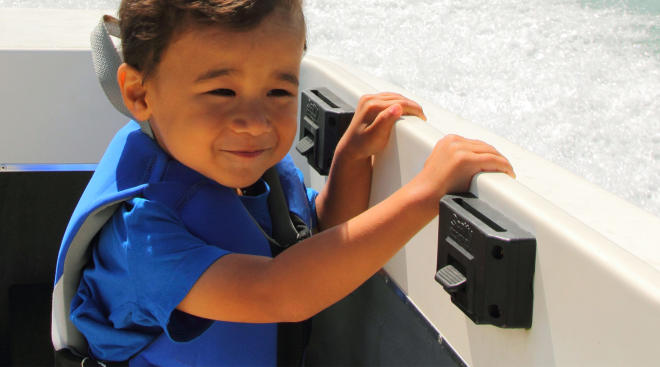 In the now-viral video that Wisconsin mom Cori Pierson recently shared to Facebook, her husband can be seen tossing their 2-year-old son into the water. Wearing a life jacket, the toddler lands on his back, floats—and then slowly turns until he’s face down in the water. Clearly, his life vest isn’t doing what it’s supposed to do.

“It was shocking and just scary, just to watch it flip my son,” Pierson told her local news station KARE 11 after the video caught their attention. It has since been viewed roughly 57,000 times.

The parents were doing the responsible thing, testing their son’s life vest before boarding a fishing boat. And they were horrified to discover that, although the device technically kept their son afloat, it put him in a dangerous position.

At first Pierson assumed there was a manufacturing issue with the vest they’d purchased. She’d done her research and chose vests for her toddler son and 5-year-old daughter that were recommended by the Coast Guard. She also made sure they were fitted appropriately for their weight and took care to securely fasten them before testing. But when she looked into it after the failed test, she realized there was a lot of information she’d overlooked.

“It wasn’t necessarily the vest itself,” Pierson told the station of what she learned. “It was the weight distribution.”

Pierson had visited the US Coast Guard’s website and gone back and read the materials that had been attached to the vest when she purchased it. In both places there was a warning cautioning that even if you buy the correct size, some vests may not work as intended, depending on the body type of the child who’s wearing it.

“Test it with the infant or child who will be wearing the PFD [Personal Flotation Device],” the Coast Guard website states. “Just because it works for one infant or child does not mean it will work for another in the same manner. Check for proper weight range, comfortable fit, and especially a stable face-up position in water.”

Case in point: Pierson had bought the same vest for her five-year-old daughter, just one size bigger, and it worked perfectly for her.

Luckily, Pierson had time to buy a different vest for their son, one that kept him afloat and face up when he hit the water. She decided to share the video on social media to flag the issue for other parents who might have missed the information themselves.

Earlier this summer, a concerned grandfather shared a similar video. He too thought he was using a safety-tested, approved life jacket when he brought his 2-year-old granddaughter into the pool. But within a couple seconds she’d flipped over face-down in the water. Viewers of the video quickly pointed out that his granddaughter was actually wearing a buoyancy vest, which is intended to be a swimming aid for more experienced swimmers rather than protection against drowning. Life jackets are what inexperienced swimmers (and the parents of inexperienced swimmers) want; they’re designed to keep a person afloat without needing to swim.

If you are buying a life jacket, the Coast Guard advises choosing one that fits snugly. To test this, their website recommends picking your child up by the shoulders of the vest. “If the PFD fits right, the child’s chin and ears will not slip through.” And if Pierson’s message resonates with you, test it in the water to ensure the jacket will keep your child face up.