“I didn’t think much of it at the time, and later ended up rushing her to the ER.”
ByStephanie Grassullo
Associate Editor
PublishedJul 2019 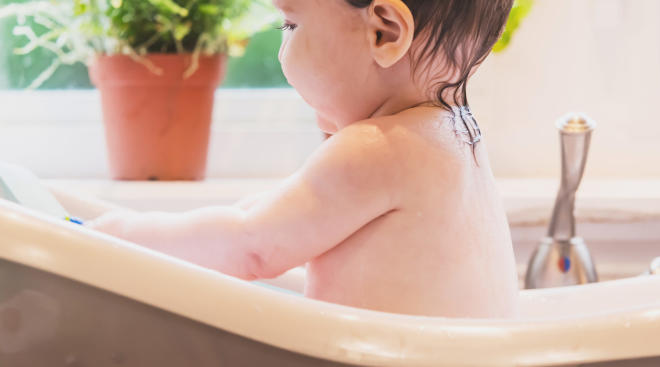 It’s natural to think that water won’t do any harm to your child. It’s just water after all, right? Wrong. Newborns get plenty of hydration from drinking breast milk and formula, and giving a young baby too much water can actually be dangerous. Katie Gorter had to learn this the hard way after her baby swallowed too much bath water and needed to be rushed to the ER. At the time of her Facebook post earlier this month, her daughter, Elly, was still recovering from the incident, but luckily should be better soon. The mom took the time to share her story and warn other parents about the threat water can pose.

Gorter usually gives her daughter about 2 oz. of water a day, but while Elly was in the bath, she swallowed way more water than usual. The mom didn’t think much of it at the time, but it wasn’t long before she had to rush her infant to the emergency room. “She became lethargic, started vomiting, and then was struggling to breath! She had so much water in her it was compressing her lungs,” the mom shares.

After seeking medical attention, doctors determined it was water intoxication and were able to help the girl, but Gorter says she is still suffering from vomiting throughout the day and will be back to normal soon.

It’s pretty easy for a scary situation like this to occur. It’s safe to give baby water whenever you start introducing solids, when babies are around 6 months old. They won’t take more than a few sips—and that’s fine, because they don’t really need it. From 6 to 12 months, babies don’t actually need water, but a few sips here and there will help them get accustomed to drinking water. Older infants, between 9 and 12 months, can and should drink more—a few ounces a day. Once your child celebrates her first birthday and is eating solids, it’s okay to let baby drink water freely, but only between meals.

The reason why these restrictions are in place is because a newborn’s kidneys might not be able to concentrate or process the water properly because of too much salt in the water. Water intoxication could occur if baby consumes too much water and loses too much sodium. If her sodium levels decrease in her bloodstream, that can cause brain swelling or seizures. If you’re worried that baby’s dehydrated, you can look for warning signs like she isn’t urinating the normal four to six times a day and she doesn’t have clear or pale-yellow urine. Those things would indicate that baby might be dehydrated, and you’ll need to talk to her pediatrician about the problem. Click here to learn more on when it’s safe for babies to drink water.