“I really hope every child is reminded that they can be and do anything. This is really seeing a dream of mine come to life, having your own Barbie and potentially seeing little kids playing with it.”
save article 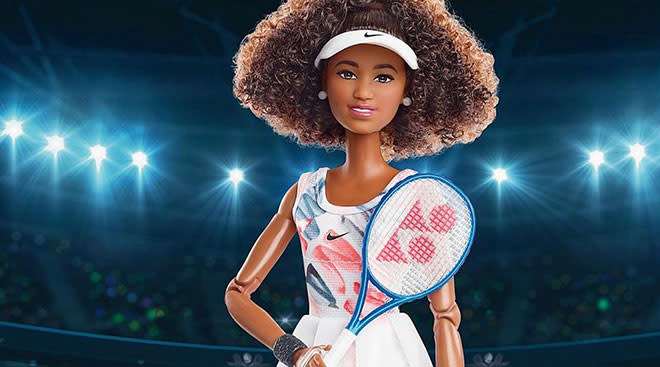 Mattel has unveiled a new Barbie doll honoring Naomi Osaka, right in time for the Tokyo Olympics, where the professional tennis player will be representing Japan.

The doll is wearing Osaka’s Nike outfit from the 2020 Australian Open and comes with a visor, tennis racket, tennis ball, sweatband, dress, shoes and doll stand. It’s available for purchase on Amazon.com and Barbie.com for $30.

“Osaka represents Japan as a professional tennis player. She became the first Japanese player in history to win a Grand Slam (one of the four major annual tennis tournaments) at the U.S. Open in 2018. The following year, she won another Grand Slam tournament (the Australian Open) and reached #1 in the Women’s Tennis Association (WTA) rankings. She already won her fourth career Grand Slam title earlier in 2021, and she’s using her platform to speak out about issues surrounding human rights and racial injustice. Naomi is a force, on and off the court,” Mattel wrote in a news release.

Osaka called the doll an honor, writing in a caption on Instagram, “I really hope every child is reminded that they can be and do anything. This is really seeing a dream of mine come to life, having your own Barbie and potentially seeing little kids playing with it.”

The professional tennis player made headlines earlier this month when she bravely decided not to compete in the French Open and Wimbledon and prioritized taking care of her mental health. She opened up about her experience in an essay for TIME, sharing, “Believe it or not, I am naturally introverted and do not court the spotlight. I always try to push myself to speak up for what I believe to be right, but that often comes at a cost of great anxiety….I do hope that people can relate and understand it’s O.K. to not be O.K., and it’s O.K. to talk about it.”

“We are incredibly honored to spotlight Naomi Osaka as part of our Barbie Role Model series," Lisa McKnight, senior vice president and global head of Barbie and dolls for Mattel, shared in a press release. “She has paved the way for future generations of girls to dream bigger, and through her unwavering courage and honesty, shown the world the importance of being your own biggest champion. Naomi continues to break boundaries on and off the court and is a powerful role model to fans everywhere.”