Nothing hits harder than words.
save article 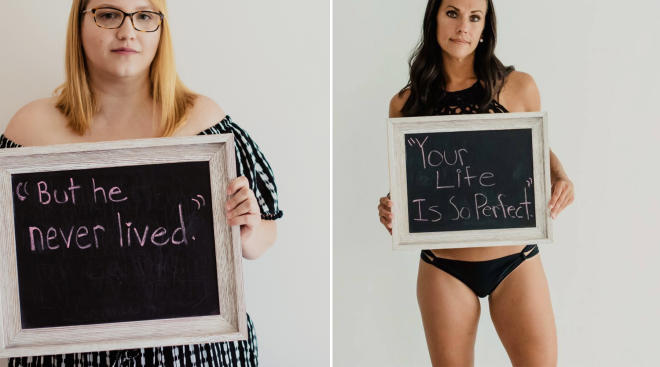 “Sometimes struggle does not have a look.”

You may think you know what someone is going through, but more often than not you have no idea of the cross she carries. A powerful photo series by the women’s empowerment group, Rise for Women, raises awareness on how to talk to women and friends coping with pregnancy and infant loss.

The women featured in the project all appear like “normal” moms, but each one carries a burden with them every day. The women have experienced loss due to miscarriage, stillbirth, disease, and other difficult circumstances, and each mom wrote down hurtful questions and comments people have made in passing.

Whether it is intentional or not, what is said to people suffering can hurt them when they are already in a low place. The project wants to start a discussion for these women, and raise awareness on the issue.

“We wrote down the common things people say to us before and sometimes even after knowing about our losses. The things said to us can sometimes hurt. Our babies matter too,” the post explains.

The first picture shows a woman holding a sign that reads, “your life is so perfect.” But the caption tells a different story.

“It appears that Michelle has the ‘perfect life.’ Great job, fit and is usually seen smiling. But the truth is, Michelle lost her daughter Micah in 2012, a loss she struggles with every single day.”

Another photo further instills how we often don’t know someone’s full story. “People often ask Andrea when she is going to start having children. But she has one. An angel,” the comment explains.

“Maybe it was meant to be,” reads one sign of a women who suffered from miscarriages.

Pestering someone about when she will get pregnant is the worst thing you can do.

Even though miscarriage is almost always out of a woman’s control, many moms suffer from guilt—don’t add to it.

Each of the photos carries a powerful message, which has resonated with many who suffer from their own story of struggle. Think twice before you say something that may offend someone coping with this grief, and if you are suffering from lose, don’t be afraid to share your pain.