At the end of the session, the women took part in a balloon release to represent the children they lost.
Save article
ByStephanie Grassullo
Associate Editor
PublishedAug 2019 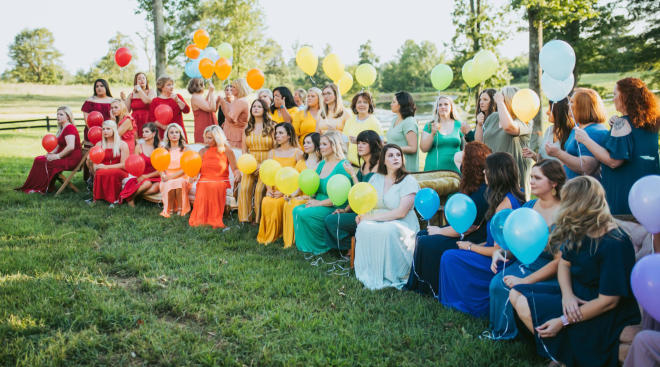 Pregnancy is a period of high emotions. You’re overjoyed and constantly dreaming about your future with baby, but at the same time, you can’t ignore the overwhelming fear of having a miscarriage. And for some, that loss unfortunately is a reality. Learning to cope after a miscarriage isn’t easy, and what happens when the woman later goes on to have another baby? She’s constantly torn between honoring her angel and celebrating her soon-to-be child. And that’s what it’s like to have a rainbow baby.

Last month, photographer Ashley Sargent gathered a group of women to bring to life a colorful photo shoot celebrating their rainbow babies, while also remembering the babies they had lost.

The idea came to Sargent after working with several moms who opened up about their previous pregnancy losses. The breathtaking images show 40 women, all of whom experienced a miscarriage before having their rainbow baby. The women and their families are sporting brightly colored outfits so when posed together, it creates the vision of a rainbow.

“I did not ever experience the pain of a miscarriage, but I know the feeling of hopelessness and the deep desire to become a mother,” the [photographer mentions](https://www.facebook.com/pg/AshleySargentPhotography/photos/?tab=album&album_id=3113390918678920& tn =-UC-R). “I began to have this idea—or vision, I should say—of seeing dozens upon dozens of mothers coming together, all as one, dressed in colors of the rainbow along with their miracle child. I wanted mothers and children of every age. In my mind, this idea was going to be a vision of hope.”

Each of the women and their kids signed up for a color and picked their outfits, according to Good Morning America. The shoot took four weeks to organize, and was a true labor of love. Sargent documented the event in a video which captures the mothers laughing and sharing their stories. At the end of the session, the women took part in a balloon release, which represented the children they lost.

The photographer shared the photos and the women’s story on [Facebook](https://www.facebook.com/pg/AshleySargentPhotography/photos/?tab=album&album_id=3113390918678920& tn =-UC-R), where the pictures have instantly gone viral. She hopes the message reaches the many moms who have gone through loss and are still figuring out how to overcome it. “I know how alone you feel,” she says. “Myself, along with the mothers in this photo, want you to know that you can overcome. You are not alone.”