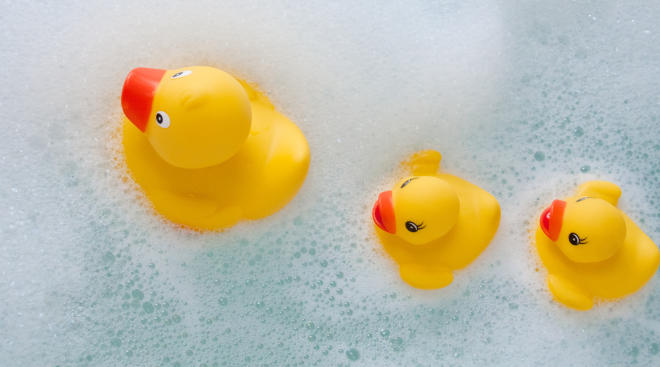 It’s not like you expected your baby gear to stay spick and span forever, but you probably didn’t see a mold-infested rubber duck or Sophie la Girafe coming your way either. We covered both of those viral incidents last year, and can officially confirm they weren’t just one-off incidents. A study published Tuesday in the journal N.P.J. Biofilms and Microbiomes says the insides of bath toys, such as rubber duckies, are a breeding ground for bacteria.

Which bath toys? According to the American and Swiss researchers, pretty much all of them that are designed like the squeezable, squirtable rubber ducky. They tested 19 different used bath toys from actual homes—but didn’t disclose the brands—finding varying levels of “dense biofilms with complex bacterial and fungal communities” in each of them. What does that mean? They all became slimy on the inside, and most were visibly coated in black mold.

Why is this happening? The bath toys’ polymer material releases carbon, promoting bacterial growth. But each bath toy sees a different buildup of bacteria over time, because tap water, plus soaps and body fluid in that tap water, play a role too.

Researchers suggest that higher regulations should be imposed on polymeric materials used for bath toys. Another suggestion? Making sure water can’t get in in the first place:

“In fact, the easiest way to prevent children from being exposed to bath toy biofilms is to simply close the hole—but where is the fun in that?” they write.