Get ready to have the song stuck in your head 24/7.
ByNehal Aggarwal
Associate Editor
PublishedMar 2020 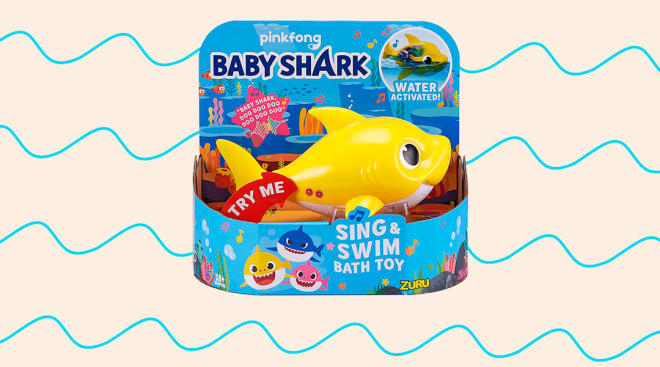 Photo: Courtesy Robo Alive Junior
We have included third party products to help you navigate and enjoy life’s biggest moments. Purchases made through links on this page may earn us a commission.

Let’s be honest, pretty much everyone—from babies to teens to grandparents—knows Pinkfong’s “Baby Shark.” (The original video has over 4.7 billion views on Youtube!) It’s catchy, is pretty easy to get stuck in your head and is beloved by tiny humans everywhere. Now, you can make bath time all the more fun with a toy that sings the hit song.

The bath toy, made by Zuru Robo Alive Junior is a best-seller on Amazon. The shark is water-activated and will swim and sing along with your child. In case you’ve had your fill of “Baby Shark,” don’t worry, the toy will turn itself off after singing the song for four minutes. The best part? It’s only $13 right now.

The toy, which is meant for children aged 3 and above, is rated 4.5 stars and has over 900 reviews—most of which are from happy parents. “My son was very excited to get this! It came with batteries which was a pleasant surprise. He immediately wanted to bath. The baby shark swims well and yes, it will sing the entire time it’s in the water but it’s not loud so it’s manageable. It makes him happy, that’s all that matters,” one dad wrote. Another parent wrote, “My 4 year old acted like the pope was coming to town when the package finally arrived and wanted to hop in the bathtub right away to play with it. Regarding the toy itself, its a neat little toy. It swims pretty quick and really well around the bathtub while singing that infamous song. What mattered was my son was sitting in the bathtub laughing and giggling as baby shark swam in a circle around him.”

What are you waiting for? Get your “Baby Shark” toy and make bath time your child’s new favorite time of day. Just be warned, the song may get stuck in your head—again!

The Best Baby Towels and Washcloths for Easy-Breezy Bathtime

What You’ll Need to Know About Baby’s First Bath