Parents are split on this one.
ByStephanie Grassullo
Associate Editor
PublishedJan 2019 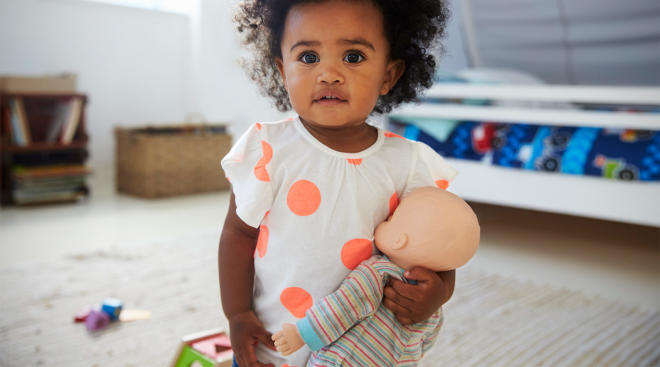 Steve Harvey and his wife Marjorie are like all proud parents, and can’t resist flooding their newsfeeds with adorable pictures of their kids. But Marjorie’s recent Instagram post of her granddaughters, Rose and Elle, has sparked a heated debate in the comments section.

In the video, the two little girls prop their baby dolls into position and pretend to breastfeed them. When Marjorie asks what they are doing, one responds “feeding our babies,” and her cousin chimes in with “from our boobies.”

Like any kids, Rose and Elle were probably mimicking what they’ve seen their own mother or aunt do. In fact, Rose’s mother, Amanda Harvey, recently gave birth in September, and is currently breastfeeding her newborn, Ezra.

As with anything related to nursing, there were a lot of mixed feelings surrounding the video. Many were outraged, and weren’t shy about sharing their thoughts.

“We need to stop allowing our daughters to grow up fast and mimic the things they see grown women do. This is totally not cute at all,” says one parent.

“I agree breastfeeding is normal…However playing house has limitations, as do many other versions of adult living to kids. Some family moments are not public ones,” writes another.

“I’m an educator and too many children today are doing ‘grown people’ things too soon, no matter how innocent it might seem,” one follower argues.

But a handful of others praised the grandmother for sharing the sweet moment.

One woman thinks the whole situation was blown out of proportion, and writes “I’m a mom of two girls, and they do whatever they see and move on to the next fun thing. It’s a kid moment—it’s really not that serious.”

“Leave it to people to take something natural and beautiful and make it disgusting. It’s not sex, it’s feeding your baby the way you were intended to,” another mom says.

“These babies were pretending to show the loving and nurturing side of parenting, which is obvious they have seen at home,” argues another follower. “They were showing how they want to love and care for another human life.”

Marjorie responded to the backlash in her Instagram stories, where she says she finds the negative comments funny, Yahoo reports.

Back in September, a photo of a rhino nursing her baby went viral for hilarious reasons. This time, the internet called out mom shamers with some pretty funny responses.