There’s nothing quite like real-time interactions for a budding brain.
Save article
ByStephanie Grassullo
Associate Editor
PublishedAug 2019 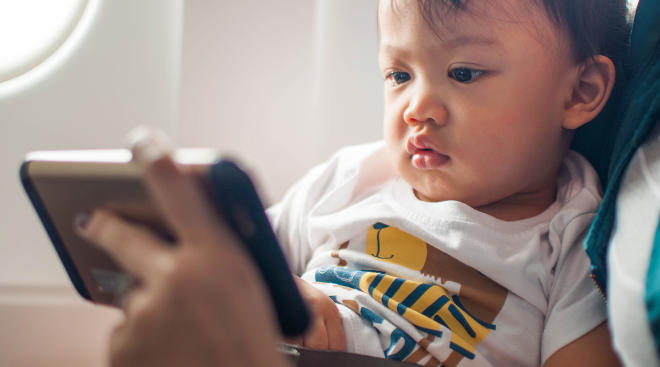 Although certain TV shows pride themselves in being educational, depending how young your child is, the content viewed during screen time won’t have much of an effect on your kiddo’s brain. Previous research has shown that children under the age of 30 months don’t learn very much from watching a screen, and researchers at Vanderbilt University took these observations one step further to see if video chatting, such as FaceTime, helped promote learning in a child’s brain.

Unlike older children, infants and toddlers need responsive, face-to-face encounters with real humans in order to learn new information. But that raises the question—Can infants and toddlers learn from a person on a screen who, unlike on a TV show or app, can call them by name and interact with them in real time? To find out, Georgene Troseth, associate professor of psychology at Vanderbilt, and her team studied 176 toddlers in two age groups—24 months and 30 months—to see under which conditions they would learn the name of an object best. The children in the study did not have prior experience with video chat.

The team of researchers selected a funny shaped object that they chose to name a “modi.” The toddlers were charged with learning the name of the object and putting it in a bin. They were studied under these four conditions:

Since a flat image on a screen isn’t real to a toddler, explains Troseth, their brains tell them what they’re seeing isn’t relevant and not something they can learn from. Even though video chat includes more communicative social cues and interaction than a nonresponsive video, the medium still wasn’t sufficient enough to support learning in the study.

Which is why researchers say the best way for infants and toddlers to learn is through positive interactions with an adult. When parents use dialogue-based questions, such as asking their child questions and encouraging them to think critically, young children are more likely to have a learning takeaway.