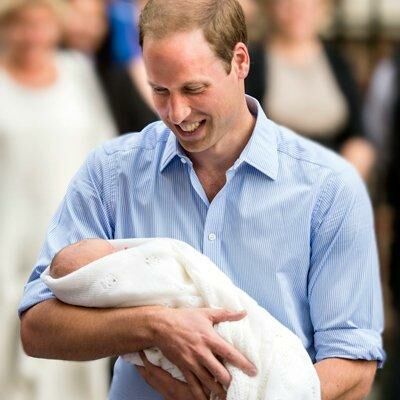 The most buzzed about paternity leave in the world is coming to a close this week, which only means one thing: Prince William is headed back to work (and it sounds like it’s going to be quite the readjustment)! The doting new daddy made his very own postbaby appearance on Saturday, when he and his hot-to-trot brother (and godfather to be!), Prince Harry , hit the pitch for a charity polo match.

In typical adorable William fashion, at the conclusion of the match, when the first-time father was given a gift, he asked " is it nappies? I’ve got to pick some up on my way home." How cute, right? But he didn’t stop there. He went on to answer questions from reporters about the match, telling the swarming crowd that he wasn’t exactly focusing on the task at hand. He said that his thoughts were on his handsome baby boy, Prince George , and well, diaper duty. He said, “I was in baby mode out there, thinking about nappies, I wasn’t really in the zone.” Never, ever thought diaper duty could make millions of grown women swoon, but as you can see, the Prince has done it again! We love that even though he was miles from Bucklebury (where the new parents are staying), Kate Middleton and their son, his thoughts never left home.

But this week, the Prince is prepping to travel even further from his family. His groundbreaking two-week paternity leave draws to a close this week, with sources saying that Wills will head back to work as a Search and Rescue Pilot in the Royal Air Force (RAF) on Wednesday morning, in Anglesey, Wales. Speaking of the family’s private time together at the Duchess’ parents house, a palace representative said, “This is now private and quiet time for them to get to know their son,” adding that the new parents are “doing well” and “enjoying bonding time with George and being around family.”

While Kate and George will most likely stay at her parents’ home in Bucklebury, William will head off to join millions of other daddies at work — and here’s what he should take advantage of before his paternity leave officially ends:

We know that Will is already a pro at handling baby blowouts (when the first left the hospital with George, Kate told reporters that William had changed his very first nappy — and it wasn’t half bad!), but since he’ll be gone for most of the day, he should totally get his fill of dirty diapers! Even though it sounds like a gross task (after all, who actually looks forward to changing a stinky one?!), those sweet moments with baby George will times that Will will cherish (and smile when he thinks about!), while he’s away at work.

2. Get in as many snuggles and cuddles as possible.

Those midday naps he’s been soaking up with George and Kate? Unfortunately, their days are numbered. It’s not like William won’t ever get to have these moments with George again, but once he’s returned to work, the time he has left to hang with his baby boy will be limited. Might as well take advantage of them while he can!

It’s reported that the Duchess is breastfeeding her baby boy, but we won’t ever really know for sure (it doesn’t sound like something she’ll brag about, does it?). So if she’s pumping ahead of time (or even if she’s bottle feeding), letting William handle feedings before he returns to work will give her a much needed (and much deserved break!), and it’ll give Will another opportunity to bond with baby.

There’s basically nothing in this world sweeter than a baby’s scent after a bath — amirite or amirite? So in addition to feeding and diaper duty, Will is totally going to want to be in charge of bath time, too. It’s the perfect opportunity to steal a little extra time with his adorable mini-me, and those post-bath hugs and kisses are some of the best hugs and kisses there are!

5. Spend a day together — without mom.

Family time is the best time, don’t get me wrong, but it’s just as important for Will to spend a day alone with George as it is for them to spend the day all together. With Will headed off to work, it’s easy for a new daddy to feel like the baby will forget about him, or not like him, or prefer to be with his mom. Even though it’s probably unlikely that George will forget who his daddy is, the extra time these two will spend together will make Will’s transition back to work a little easier.

How did you (and your partner) prepare to go back to work after baby?