Find out what speech development tips are true and which are all talk. 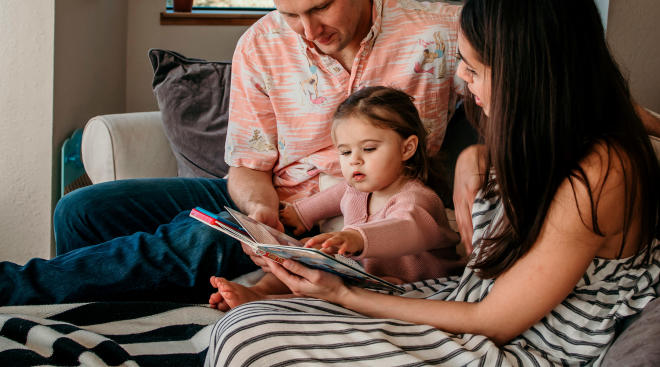 You’ve been waiting to hear “mama” and “dada,” but all your 9-month-old says is “goo-goo-ga-ga.” Could there be a speech delay? Don’t sweat it, baby is on the right track and probably won’t say those coveted words until her first birthday. Though just because she isn’t speaking real words doesn’t mean she isn’t communicating. In fact, babies as young as 2 months are crying and making cooing sounds because they are trying to tell you something. Baby speech development is like a block tower: the stronger the base, the more you can build on it. When you encourage babbling at 4 months, applauding “ah” and “oh” sounds at 6 months, and promoting all the “ba-ba-ba” and “de-de-de” exclamations, there’s a good chance baby will call out for you by 12 months and start building her vocabulary to around 20 words by 18 months, leading to a few basic sentences by her second birthday.

“There’s variation [in early language development] though,” says Doreen Arcus, associate professor of psychology at University of Massachusetts Lowell. “Some will say first words earlier, some later. First words don’t always sound like the adult versions of the words.”

Perhaps because of this verbal discrepancy, parents start to worry about late talkers—oftentimes, looking for culprits that might explain speech delay. We’re here to bust the myths and lay down the facts when it comes to baby talk.

MYTH: When it comes to baby speech development, watching someone say “ball” on a screen is less efficient than when you say “ball” in person. One study showed that when 9-month-old infants watched someone speak Mandarin via a DVD, their attention scores were lower than those babies who were in the presence of a live speaker. This research falls in line with other studies that show that when preschoolers are exposed to another language on TV, they may grasp a few vocabulary words, but not the more intricate aspects of language, like phonetics and grammar. “Real people tailor their speech to baby,” says Krista Byers-Heinlein, associate professor of psychology and research chair in bilingualism at Concordia University in Montreal, Quebec. “They are more likely to speak when baby is looking at them and listening. Babies also learn from the natural give-and-take of conversation—an adult speaks, baby responds with a smile or babble—and the ‘conversation’ continues. Television, videos and radio cannot do this.” Keep in mind: Not all screens are equal. Good news: chatting with toddlers via Skype or FaceTime is just as good as in person. Distant relatives rejoice!

TRUTH: It may seem you’re interacting with baby by spurring gibberish in response to her sounds, but in reality, you’re somewhat cementing nonsensical words. “Adults are surprisingly good at encouraging infant speech development,” Arcus says. “Simplified sentences with exaggerated rhythm and repetition are effective at capturing babies’ attention and giving them smaller chunks of language to process.” Funnily enough, you may have even already practiced this style of conversing with your dog baby Fido. Bottom line: Skip the baby talk.

MYTH: “There’s no evidence that pacifiers impede speech development,” Arcus says. This speech development myth may have come about from the simple fact that it’s much harder to understand baby when he has his mouth “plugged up.” Help babbling toddlers realize you’re having trouble understanding them if they have a pacifier in their mouth. “Given they’re generally really eager to be understood, this can be done in a positive way so they’re motivated to take these ‘obstacles’ out of their mouths, rather than be forced to [stop],” adds Laura Jana, MD, pediatrician and author of The Toddler Brain. However, for proper dental development, you’ll want to start to curb the pacifier habit around baby’s first birthday, and call it quits altogether by 24 months.

Babies “talk” even when they don’t use real words

TRUTH: Around 9 months, baby is able to copy sounds and gestures as well as point to things of interest. Anyone who’s seen a baby hold up her arms knows it’s the universal sign for “pick me up.” So if your little one points to the light switch and says, ‘”La-la”, she is definitely using a word, Arcus says. “These types of two syllable combinations are typical of early words like ‘Ma-ma,’ ‘Da-da,’ and ‘wa-wa’ for Mommy, Daddy, and water,” she adds.

MYTH: Sure, it may seem that when baby hears two (or three) different languages she’ll be confused, but the good news is bilingual babies do not experience a speech delay. In fact, they pass all their language milestones at the same age as monolingual babies. One thing to keep in mind: Some aspects of their development look a bit different for bilinguals because they’re learning two languages. “The vocabulary words they know are divided between the two languages,” Byers-Heinlein says. That means, for example, an 18-month-old monolingual learning only English might say about 50 words. An 18-month-old bilingual learning English and Spanish might only say about 25 words in English but also say about 25 words in Spanish. While it might look like a speech delay, baby knows a total of 50 words just in two languages. This shows that bilingual babies are learning at the same rate, Byers-Heinlein says.

TRUTH: Neuroscientists have shown that the brains of boys and girls develop at different rates. “Boys mature slower than girls, in general,” Arcus says. “Speech is part of that overall, early developmental picture.” Though girls tend to be a tad ahead in in combining words, gesticulating and vocabulary building, clearly, the difference is slight since you’ll rarely see a communication rift between genders at playdates.

MYTH: Albert Einstein was a reluctant talker as a toddler, and remained so into adulthood—though no one challenges his genius. Measuring intellectual success based on first words is like correlating athleticism to tummy time. Genetics, socioeconomic factors and sociability are all major influences in brainpower. If you want to boost baby’s early language development, music class and story time are good places to start.

Toddlers can make sentences by 18 months

TRUTH: Don’t expect elaborate soliloquies but your toddler will probably start to figure out how to link words into two-word strings like “want cookie” and “no peas” by 18 months. The general guidelines predict between 50 and 100 words between 18 and 24 months.

MYTH: Our experts agree that there’s no concrete evidence that birth order should affect baby speech development. Perhaps baby has a talkative older brother, but that can swing both ways—baby may try to mimic and pick up words quicker, or take the backseat if big bro is always talking for him. It really comes down to baby’s personality. One study showed that second-born children may learn more personal pronouns, but that doesn’t mean they have a leg up in overall language development.

“Speech is a social phenomenon,” Arcus says. “The more parents and others engage socially with the child and use language while doing so, the more likely the child’s language development will blossom.” Here are a few ways to get baby talking:

•Talk with babies throughout the day. This means put your phone down. Trying to interact with baby while scrolling through Facebook is counterproductive. Making eye contact and awareness of your (and baby’s) facial expressions as you narrate activities together is an easy way to encourage language development.
•Read books together. Some adults may not find much value in reading to a pre-verbal baby—particularly one who prefers to chew on books. “There’s amazing science behind baby brain development long before they can formally carry on a conversation,” Jana says. “One way grab their attention is by reading in a singy-song voice—babies tend to respond better when they hear this tone." When you read, Moo, Baa, La La La! for the hundredth time—remember, it’s worth it. Music is another way to assist babies in grasping the complex rhythm of the spoken language.
•Track baby’s speech patterns. When you talk with baby, check if she’s actually paying attention. Parents can observe their children processing language before they speak by saying things like, “Where’s the doggie?” when their child is looking in the dog’s direction, Arcus recommends.
•Engage in turn-taking activities. Games like peek-a-boo, rolling the ball back and forth and reading all require mutual eye gaze—the foundational block of communication.
•Check baby’s hearing. Even if baby passed the hearing impairment test after birth, recurring ear infections can affect hearing and lead to possible language delays. If baby hasn’t said his first word by about 14 months, or if by age 2 he doesn’t say about 10 words or seem to understand about 50 words, your child may have hearing trouble, which is often linked to speech delays.

How To Predict Baby’s First Word