When Do Babies Say Mama and Dada?

“Mama” and “dada” are often baby’s first words, but when should you expect your little one to start saying them—and using them correctly? 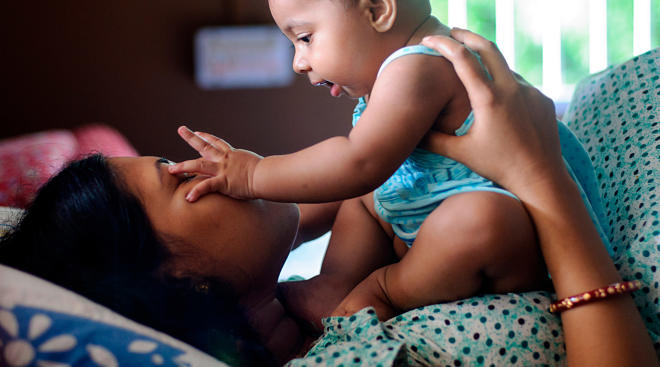 It’s pretty thrilling when baby starts babbling—finally, your little one is a step closer to talking! Of course, that also means the race is on between you and your partner to see which word baby says first: “mama” or “dada.” It’s unlikely that baby is going to start saying either word right after they begin making noises, but it naturally raises an important question: Just when do babies say “mama” and “dada” anyway?

At What Age Do Babies Say “Mama” and “Dada”?

While the timeline can differ for every child—even those in the same family—most babies start stringing together syllables that sounds like “mamamama” or “dadadadada” by 7 months, says Jennifer L. Maietta, MS, CCC-SLP, a speech-language pathologist who works with children from birth to 6 years old at MassGeneral Hospital for Children in Boston. These initial sounds are just babbles, but as they approach 9 months and beyond, they get better at saying the actual words.

That still doesn’t mean they actually know what they’re saying at that point. “They might look at you or the dad and say it, or say it to the mailman,” says Danelle Fisher, MD, FAAP, chair of pediatrics at Providence Saint John’s Health Center in Santa Monica, California. “They’ll say it to anybody.” But around the one-year mark, baby will likely start to use the word correctly within context. And when it happens, “it’s magical,” Fisher says. “When they look at you and say ‘mama’ or ‘dada’ and mean it, it’s the best thing in the world.”

It’s a common belief that babies naturally say “dada” before “mama.” But Gina Posner, MD, a pediatrician at MemorialCare Orange Coast Medical Center in Fountain Valley, California, says that’s not necessarily the case. “Some kids are really obsessed with the ‘da’ sound, and others like the ‘ma’ sound,” she says. Whichever they latch onto in the beginning will help determine which word they say first.

Still, some kids just are better able to say “da” than “ma.” “It’s not that they love dada better, but it really is the function that the ‘d’ is easier to say than the ‘m,’” Fisher says. But if the mom spends more time caring for the child, she might have a leg up, Fisher adds, pointing out that babies may say the name of their primary caregiver first.

How to Help Baby Say “Mama” and “Dada”

While you can’t rush baby’s development, there are a few ways to help teach your child to say ‘mama’ and ‘dada.’

Babies imitate their parents, Fisher says, so continually sounding out “mama” and “dada” and encouraging your child to repeat the words is key. To help baby understand what those words actually mean, make sure to teach them in context. “I encourage parents to identify each other as ‘mama’ or ‘dada’ when talking to the child,” Posner says. “For example, you can say, ‘Look at Mama! Mama has food for you.’ That way, baby starts associating a parent with a specific name.”

When it comes to fostering baby’s language development in general, the best way is to read to her, play with her, talk to her and limit screen time and electronic toys, Maietta says. Find children’s books that rely heavily on the words “mama” and “dada” and read them often—it can go further than you think.

Every child is different, but if baby isn’t saying “mama” and “dada” by 12 to 15 months, flag it for your pediatrician. Most doctors expect children to have mastered those words by that point; for those who haven’t, a hearing test or speech therapy may be recommended. If your child says plenty of other words but “mama” and “dada” aren’t on the list, don’t panic. “While the words ‘mama’ and ‘dada’ are highly motivating for parents to hear, we’re more focused on whether the child is babbling using a variety of consonants, copying sounds and movements that a parent or caregiver does, using gestures like pointing and making eye contact, and engaging in back-and-forth games like ‘peek-a-boo,’” Maietta says. “Mama” and “dada” will come in time—and it will be well worth the wait.

When Do Babies Recognize Their Name?

Baby Milestones: What Will Baby Do When?