Toddlerhood starts, and — finally! — you two can have a conversation. Try these tricks for sharpening your toddler's language skills.
Save article
ByElena Donovan Mauer
UpdatedOct 2019 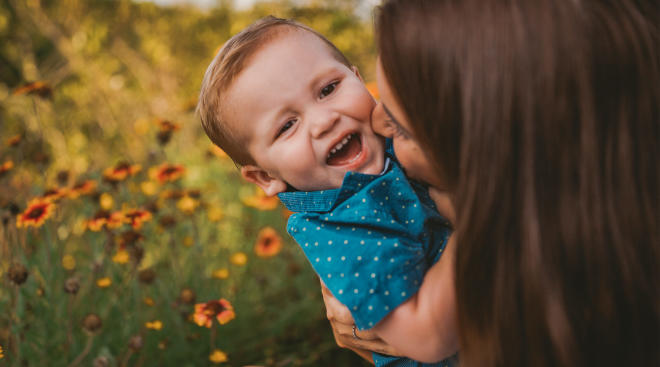 Quit the baby talk
You might naturally stop using that singsongy voice with your toddler once you realize how much he truly understands — you’ll ask him to bring you a book and he’ll walk to the bookshelf, or you’ll wonder out loud where the cat is and he’ll point to Chester. Baby talk isn’t necessary anymore, since he’s already paying attention to your words and making meaningful associations.

Keep it simple
When you talk to him, use straightforward, simple words and short sentences to keep him from getting confused. “Think of it as mini bullets,” says Dr. Fran Walfish, child and family therapist and author of The Self- Aware Parent: Resolving Conflict and Building a Better Bond with Your Child. “The fewer words, the easier it is for the child to comprehend.” Slow down and enunciate clearly, so he can learn more of your words.

Become a narrator
Talk to your child about what’s going on around him — and if he’s communicating nonverbally, give him the words. For example, if he’s raising his arms to you, says Walfish, “say, ‘Sam wants mommy to pick him up. Pick up the baby!’” it might seem weird to call yourself “mommy” instead of “me,” but young toddlers don’t really get pronouns just yet, so your point will be much clearer.

Listen closely and reply
In the beginning, your toddler’s words will be hard to understand — you might not know whether he’s actually talking or just babbling. But if you really listen — and look at what he’s pointing or motioning at — you’ll start to get it. Up his confidence level by showing him you understand. if he’s saying “da” for “duck,” respond by saying, “yes, that’s a duck!” Resist the urge to start calling things by his words for them, and he’ll more easily learn the correct pronunciation.

Practice patience
Kids learn to talk at different rates, so if yours seems behind, he’s likely just fine. Keep talking with him to help him catch on. It’s worth it to mention any delays to his pediatrician so the doc can check for explanations (like a hearing problem) or lead you to a pro who’s trained in helping kids learn to speak.

Signs of a Speech Delay