Need some star-powered inspiration for your child’s get-up? Check out this parade of cutie pies all adorably decked out for Halloween. 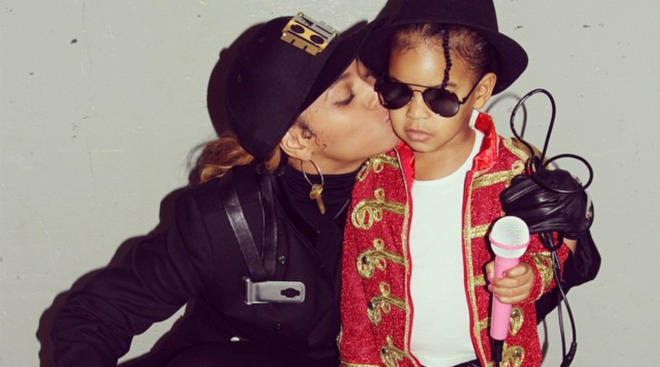 Luna Legend as a Hot Dog
Chrissy Teigen and John Legend’s little girl did her first Halloween up right in a whole slew of costumes, including Minnie Mouse and a peacock, but this little wiener had us cracking up.

Harper and Gideon Burtka-Harris as Alice and the White Rabbit
The Burtka-Harrises always kill it on Halloween, but they outdid themselves in 2013, when dads Neil and David played Tweedledee and Tweedledum to the kids’ Alice in Wonderland-themed costumes.

Benjamin Brady as Super Mario
As mom Gisele Bundchen (dressed as Luigi) noted on Instagram, “When your son wants to be Super Mario but no one wants to be Luigi. This is what you do. 😂😂😂.”

Blue Ivy Carter as Michael Jackson
Power duo, indeed! While mom Queen Bey dressed up as Janet circa the “Rhythm Nation” era, her adorable daughter played the late King of Pop himself.

Scarlett Stuber as Lettuce
Just in case you weren’t sure, Molly Sims captioned this precious shot of her leafy daughter, “Yes. I am Lettuce #sthingthatgrowsingarden #theSeed #preschoolfun.”

North West as a Skunk
Mama Kim Kardashian couldn’t help but share a pic of her “little stinker,” who, she noted via Instagram, was patiently waiting to show dad Kanye West her Halloween costume.

Frances Fallon as Farrah Fawcett
Those waves, though! Jimmy Fallon’s little girl embraced her inner '70s siren in a nude bodysuit topped with a mini version of the iconic red one-piece.

Sloane Haggerty as a Strawberry
Macklemore’s daughter looked positively sweet in her berry bright costume (which, as Dad noted on Instagram, was made by her grandma). 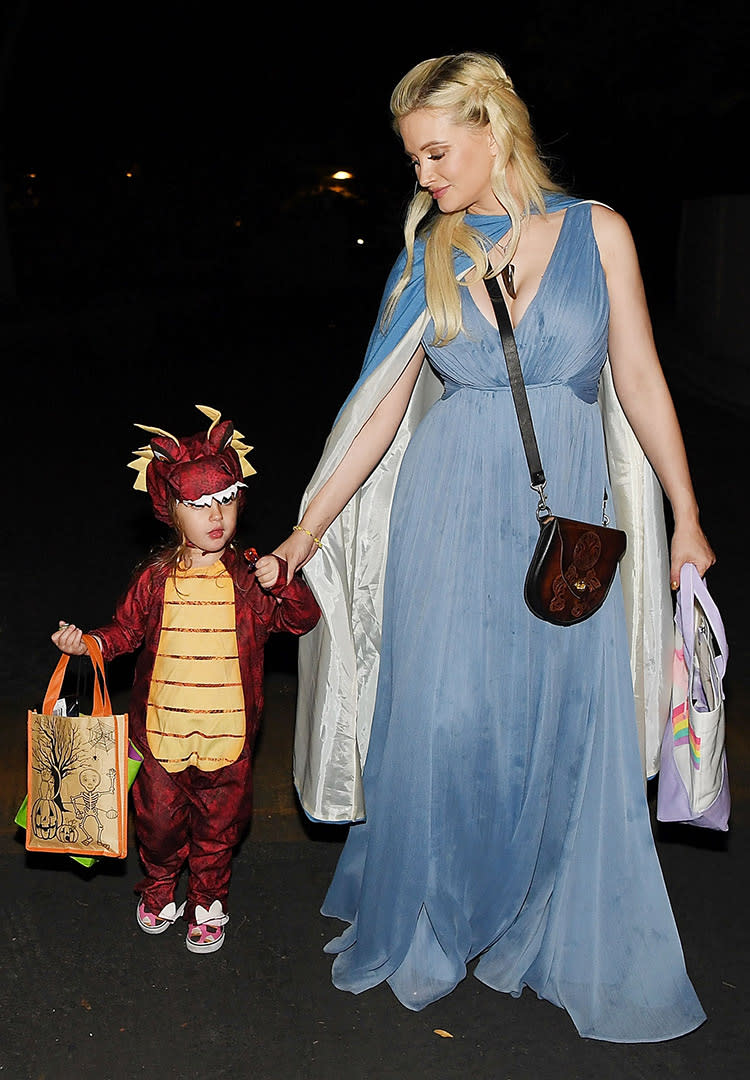 Heaven and Hendrix Hart as Kid Genius and Mummy
Nerd alert! Kevin Hart’s daughter embraced her inner super-student—suspenders, knee highs and all, while his son opted for traditional spooks, mummy-style.

Birdie Leigh Silverstein as Tinkerbell
Like daughter, like mother: Busy Philipps’s daughter dressed up as Peter Pan’s sidekick in 2010, so her mom decided to put on the wings too. 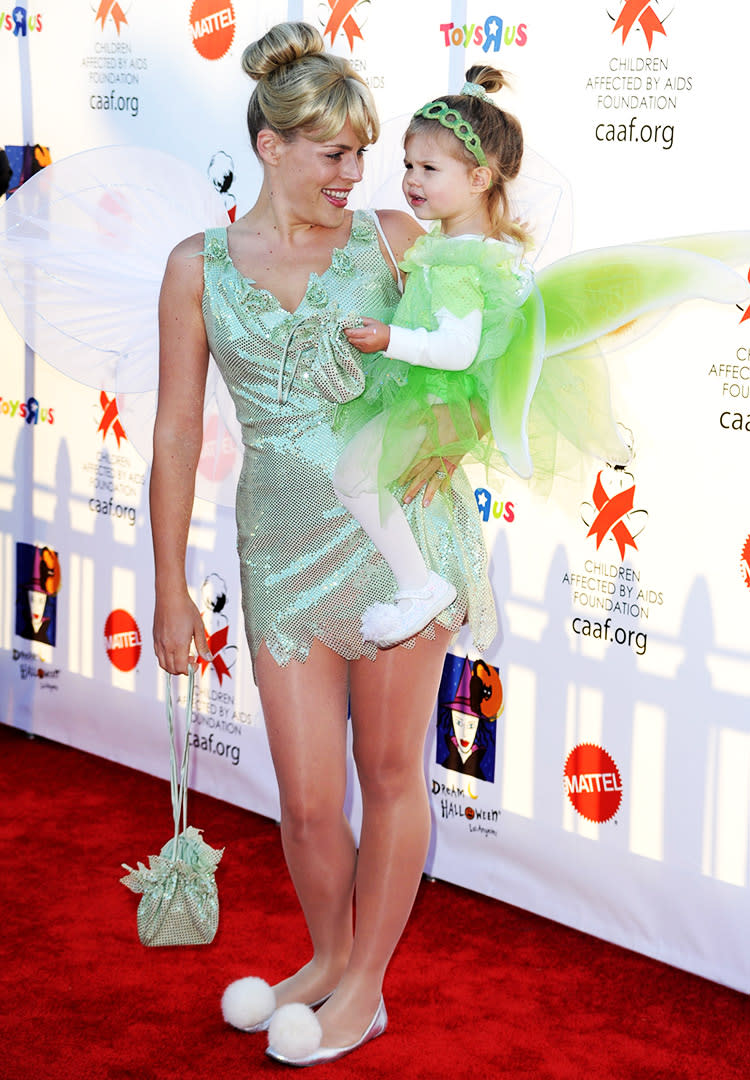 Amaya, Andrew and August Hermann as the characters of Inside Out
Hargitay led the group as the Pixar film’s star, Joy. Her husband, Peter, and three kids each dressed up as one of the film’s emotions (from left, Sadness, Fear, Disgust, and Anger). Despite their characters, they all presumably had a ball!

Gia Lopez as Marilyn Monroe
We’re feeling those retro vibes! While Extra cohost Mario Lopez rocked one of The King’s famed jumpsuits, his daughter struck a pose as Marilyn Monroe in an iconic “Diamonds Are a Girl’s Best Friend” gown.

Haven and Honor Warren as a Genie and a Pirate
If each of your kids wants to be something different for Halloween, you can square off, à la the Alba-Warrens. Mom Jessica Alba coordinated with her younger daughter in headscarves and harem pants, while dad Cash Warren signed up for the pirate’s life (shoulder parrot included).

Harper and Gideon Burtka-Harris as Princess Leia and Luke Skywalker
They’re so good, we had to include them again! Neil Patrick Harris and David Burtka’s darling duo are out of this world as the Star Wars galaxy’s famous twins, while the adults got in on the fun too, with Burtka dressed as Han Solo and Harris as Obi-Wan Kenobi. (Even Yoda makes a stealth appearance!)

Chanel Marrow as a Lamb
Ice-T and Coco’s baby girl was the definition of precious as a fluffy lamb, topped with a bow, for her first Halloween.

Winnie Fallon as Ramen
Jimmy Fallon and Nancy Juvonen’s Halloween costume for their older daughter in 2014 paid tribute to everyone’s favorite noodles. So much yarn and cuteness!

Marlowe and Major Martino as Ariel and Flounder
Eva Amurri’s children went under the sea to become _The Little Mermaid’_s famous characters. (FYI: If you love Major’s knitted baby costume, you can find many more like it on Etsy!)

Camden and Brooklyn Lachey and Olaf and Elsa
Some people just can’t Let It Go! Including Nick and Vanessa Lachey, whose family rocked it as the famous Frozen crew: Kristoff, Olaf, Anna and Elsa,.

Carmen, Rafael and Leonardo Baldwin as Dorothy, the Lion and the Scarecrow The Wizard of Oz cast was rounded out with parents Alec Baldwin as the Tin Man and mom Hilaria as Glinda the Good Witch.

Mason, Reign and Penelope Kardashian as Marvel Super Heroes Talk about star power! Kourtney Kardashian and clan flexed their might as superheroes for Halloween 2016.