From superheroes to snack foods, our picks for the cutest toddler Halloween costume ideas will appeal to parents and kids alike.
Save article
ByKate Traverson
UpdatedSep 2020 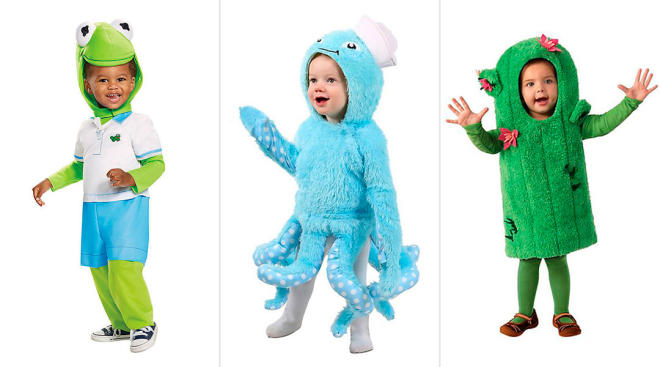 Photo: Courtesy Manufacturer
We have included third party products to help you navigate and enjoy life’s biggest moments. Purchases made through links on this page may earn us a commission.

Halloween has a way of sneaking up on us. (Boo!) Whether you’re a DIY queen or someone who just wants to toss something in your (online) shopping cart and be done with it, we’ve rounded up the best toddler Halloween costumes for you, from super-cute characters to slightly scary toddler costumes. COVID-19 has dramatically altered so much in 2020, and trick-or-treating will likely look a bit different this year. But while some counties are limiting or discouraging the tradition, families in other areas still intend to celebrate Halloween to the max—just at a safe social distance while wearing proper face masks. Rest assured that when October 31 rolls around, you’ll be trick-or-treat ready with these toddler Halloween costume ideas you and your tot will love. (Psst…shopping for younger siblings too? Check out these adorable baby costumes as well.

Here, shop the best toddler Halloween costumes for 1-year-old, 2-year-old and 3-year-old boys. Suit up your little hero in any of our perfect picks and watch him spring into action.

On the hunt for a toddler superhero costume? If cuteness is a weapon, then Gotham City is safe with your tot in this classic costume, complete with a cape and mask. It’s available in sizes 2T to 4T.

When you’re shopping for a young tot, the best toddler Halloween costumes are those that open from the bottom for easy diaper changing—and you better believe this magical Disney toddler costume does just that. (Hot diggety dog!) It’s an excellent Halloween costume for a 1- to 2-year-old boy.

Why not dress your little Muppet as his favorite frog? If your kid can’t get enough of the new Muppet Babies reboot, this is the best toddler costume for any Kermit fan.

Hear me roar! This handmade lion costume for toddler boys or girls is the perfect safari look for your little one. Because let’s face it: Life with a toddler is always an adventure. It’s also available in kids’ sizes if you want your tot to match their older sibling. Lions travel in prides, after all.

This is certainly one of the best toddler Halloween costumes for any railway lover. The over-the-shoulder train engine will make your toddler want to zoom around the room with excitement. We’re willing to bet they’ll want to wear this one way past October 31.

Yup, we’ve got your princess toddler costumes. But we’ve also included Little Red Riding Hood, the fearless warrior Mulan and other toddler girl Halloween costumes for kids who want to venture outside the castle.

Does your daughter want to upgrade her Elsa look á la Frozen 2? This snow queen dress inspired by the sequel includes shimmery sheer sleeves and an attached cape for extra flair.

With this true-to-character costume (check out those gauntlets!) your pint-sized Amazon will rule the party. We especially love the red and white boot covers.

Photo: Courtesy Top of the Beanstalk

This beautiful cape transforms any kiddo into Little Red Riding Hood. We love all the details, like the patterned lining and metallic gold bow. It’s one of the best toddler costumes for those living in cooler climes, as it’s made from soft, cozy flannel to keep your daughter toasty despite an autumn chill.

With the recent release of the live action reboot of Mulan on Disney+, this is bound to be one of the best toddler Halloween costumes this year. If your child dreams of fighting for the Imperial Army, she’ll be ready to take on the enemy wearing this detailed robe with panels of armor.

Your little one is sure to cast a spell dressed as everyone’s favorite Sesame Street fairy. With adorable details like a crushed velvet top, sparkly wings and a headband resembling Abby’s signature pigtails, she’ll be ready to make some magic on Halloween.

Your dear daughter will look too cute for words in this whimsical, woodland Halloween costume. With a flower crown, tulle tutu and suede top, it’s everything a toddler girl could want.

With these ingenious toddler Halloween costume ideas, your little one will stand out in the (socially spaced-out) crowd.

For those looking to raise a feminist (it’s never too early), this is one of the best toddler Halloween costumes around. This iconic look comes toddler-sized with a denim jumpsuit, Rosie patch and polka dot headband.

Your kid will be doing the robot all day in this awesome getup that will set them apart from the less tech-savvy crowd. It includes all the nuts and bolts to complete the look, from the top of the robot antenna to the bottom of the silver boot covers. (This is also a unique DIY toddler Halloween costume idea if you’re feeling crafty.)

You can’t always make your toddler smile (we know those tantrums all too well), but they’ll still light up everybody’s life in this sunshine-y, giggle-inducing rainbow costume.

When in doubt, go with a cute critter. While toddler animal costumes are ever-popular, less-thought-of animals like an octopus are a creative choice. We can’t stop giggling over the arms as tentacles on this adorable outfit.

This costume is an absolutely delicious combo. Get in on the fun dressed as the milkman, a cow or a baker and you’re sure to win any creative family costume contest.

When you’re brainstorming some toddler Halloween costume ideas, you don’t want to stray too scary—you obviously don’t want to frighten your tot or any friends they’re celebrating with. But that doesn’t mean you can’t pay tribute to Halloween’s spookier side at all. These scary-cute toddler costumes honor traditional October 31 motifs in a kid-friendly way.

The details on this two-piece toddler costume are absolutely bewitching. Soft velour fabric trimmed with sparkle stripes adorn the hat and dress. And who can resist a full skirt made for twirling?

The best toddler costumes are a fun, modern twist on traditional Halloween outfits. This smiley spirit is an easy-to-wear poncho that will have your tot twirling for the camera. Simply pair it with a white shirt and leggings.

Fly high with this winged toddler costume. It’s got shiny scales, a spiked tail and a removable head with sharp—okay, very soft—teeth.

Photo: Courtesy ME and REEKIE

Want to prevent a “take it off!” meltdown? The best toddler Halloween costumes are comfortable enough to wear for hours on end. This mummy print top and bottoms set is both cool and casual for a day at preschool. Yes, those are harem pants. How fun is that?

Your little one can have some major mood swings—just like the mythical werewolf. With its flannel shirt, fuzzy boots and furry hood, this cozy toddler costume will keep them warm all while looking fierce. Confused about the sizing? “Medium” fits 12 to 18 months, while “large” fits 18 to 24.

If spiders give you the jitters, this toddler Halloween costume idea might just cure your phobia. How can you hate an arachnid this plush?

There’s cute, and then there’s cute. We found these Halloween costumes for toddlers especially irresistible.

We bet you’re used to your kid monkeying around. They’ll look the part in this super-soft jumpsuit and hood, which features an adorable monkey head, tail and non-skid feet.

Among the cute Halloween costumes for toddler boys and girls alike, this bee outfit will create quite the buzz. It features a chenille bumble bee bodysuit with tulle wings and a hood with antennae.

If you’re looking for more unique toddler Halloween costume ideas, turn to food. This too-cute pineapple comes with tights, a shirt and a fleecy zip-up bodysuit in an adorable bubble belly shape.

If you’re looking for cute toddler Halloween costume ideas, a precious little puppy is a foolproof option! This fluffy faux fur Dalmatian jumpsuit will keep them warm head to toe if the weather gets chilly.

Put the “trick” in trick-or-treat with these hilarious toddler Halloween costumes for boys and girls.

This toddler Halloween costume is sort of a big deal. In this twill suit, tie, wig, mustache and press badge, your little boy will look just like Will Ferrell in the beloved movie Anchorman.

This is one of the best toddler Halloween costumes for admiring fans to cluck over. Passersby will flock to get a look at this funny chicken outfit. You know what really gets us? Those chicken feet pants!

What earns this pick a spot on our list of best toddler Halloween costumes? We can’t resist a good pun. Your little one will look devilishly cute in this fried egg topped with a devil horns hat. Watch the smile spread on everyone’s faces as they let the joke sink in.

On the hunt for funny toddler Halloween costumes? Alrighty then! We’ve got the one for you. Dress your kiddo as Ace Ventura, Pet Detective, and let your mini Jim Carrey have a ball.

This prickly costume pick is bound to get a few chuckles. It might be the only time you’re tempted to hug a cactus! Most toddlers should fit the size xsmall (equivalent to children’s size 1-2); just add a green shirt and pants.

You don’t have to spend big to look cute on Halloween. These are the best toddler costumes for under $25.

We can’t believe this adorable dino zip-up jumpsuit is less than 20 bucks. The dinosaur head hood and spikes all the way down to the tip of the tail really sell it. This has to be one of the best toddler costumes to double as dress-up play for months to come.

Keep to the classics with this adorably oversized pumpkin outfit with toddler sizes 2T and up. The body glows in the dark, and the adorable pumpkin hat will set it apart from other squashes on the street.

Want to have the coolest, on-trend toddler on the block? Dress them as the irresistibly cute internet sensation from the Disney+ series The Mandalorian. The robe and headpiece perfectly resemble “The Child” from the show, but it’s the hilarious hand covers that really complete the look.

Forget the scarecrow—dress baby up as the corn! It’s just, well, corny enough. Proof that the best toddler Halloween costumes don’t have to be overly elaborate to be downright adorable.

Are you a Pinterest pro? Or simply don’t want to spend extra money on a toddler costume you could make at home? You can make these creative DIY toddler Halloween costumes at home with basic craft supplies.

This DIY sushi costume demonstrates how black duct tape, foam pieces and spray paint can turn your toddler into a cute California roll.

For a hilarious take on the trope, simply attach baby’s favorite stuffed animals to a robe to make one of the most purr-fectly simple Halloween costumes for toddlers.

If your toddler likes playing dinosaurs, they’ll love dressing the part in this camo hoodie number.

We bow down to this fur-ociously cute Lord Snow toddler Halloween costume idea that’s also simple to pull off (not including the “wolf” stand-in, that is!).

Your tot will love shaking their tail feathers in this fabulous toddler halloween costume. For the tutu, you’ll need tulle, a plastic fan and feathers. Simply attach the feathers to the fan using a glue gun with help from this tutorial.

A gray cardigan, glasses and a bouquet of balloons can transform your tot into the grandpa in the Pixar favorite Up. For the walker, affix pipes to tennis balls.

14 Adorable Designer Baby Clothes for Your Stylish Little One

8 Types of Newborn Baby Clothes Every New Parent Should Own

The Best Toddler Shoes for Every Activity

23 Splashy Kids’ Water Shoes for the Beach, Pool and Park

17 Spirited Fourth of July Outfits for Babies and Toddlers

25 Baby and Toddler Holiday Pajamas for Sweet Dreams This Season