Mom and pediatrician Dr. Cheryl Wu talks about her decision to breastfeed, the most random place she ever whipped it out, and life with her son Koy. 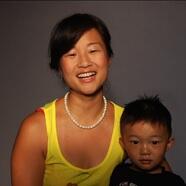 TB: When did you decide to breastfeed/when did you know for sure that you were going to?

TB: Were you breastfed when you were a baby?

TB: So was it something that was never really talked about in your family, then?

CW: Actually no, my mom talked about it a lot. There were four of us. My oldest brother was breastfed and he was one of those very, very hungry babies. And he actually had to supplement. So she didn’t breastfeed my second brother or myself, number three; but she did breastfeed my younger sister for a year.

TB: When you first started to breastfeed, did you have trouble? Did it hurt? Did you feel like, "I don’t know if I can do this?"

CW Absolutely. I mean I’m a pediatrician, so I went through training and support to teach others how to breastfeed. But when I started myself I was like “Oh my gosh, this is the hardest thing I’ve ever had to do! Nobody ever told me it was going to hurt like this.” Definitely there was a lot of trouble, but it gives you a better appreciation of how difficult it is and for people in general, for women. I have medical training and I still found it very hard. The milk would come in a day or two late, I had latching issues… who knows what it was, but it was definitely very difficult.

TB: When did you feel like everything finally "clicked?"

CW: Well my son had really bad colic and reflux so he really wanted to feed all the time, and he had jaundice too. So I would say I was definitely, exclusively breastfeeding by, I’d say, a month of age. But between three months and six months is kind of like the golden time. He had stopped being so colicky and, you know, I was breastfeeding him around the clock, he wasn’t eating solids, there was no formula, there was no bottle. It was just me, breastfeeding my son.

TB: Did you have a goal time originally? Did you say "I want to do it for six months, a year, or longer?"

CW: I definitely thought a year at first, but in the end he was almost three.

TB: How hard was it to breastfeed and pump for work?

CW: I went to work. I started work on a more consistent basis on a part-time schedule when he was six months old. And naturally the breast milk supply drops after six months of age and I wasn’t making a lot. And it’s unbelievable to kind of see your breast milk supply dwindle down to almost nothing, and you may have to supplement with formula. But you deal with it any way you can, that’s why formula was invented. Otherwise my son would be drinking water all the time.

TB: So you never felt uncomfortable or anything?

CW: No because it was always covered up.

TB: Did your husband have an opinion about you breastfeeding at all?

CW: Well I started when he had colic, and of course being a mom you blame yourself for everything and then everyone around you says “it’s the breast milk, stop breastfeeding him, that’s why he’s so gassy and colicky and refluxy.” So it’s definitely a lot of struggles. I think it’s probably the rare occasion when everything was perfect. I mean it’s great when it is, but there’s always something going on, you know?

TB: When you had any questions in the beginning, I know you had medical training yourself, but did you have friends who were like consultants?

**CW:**I had an attending, I had like an 80 year old attending, a pediatrician. He’s been a pediatrician forever. He’s a man, but he’s seen this a lot. So I remember sending him emails asking him for advice and my friends who had breastfed, and a lot of sites. Pediatricians use the Internet too!

TB: What’s the most random place you’ve either pumped or breastfed?

CW For pumping it was the hospital call room. For breastfeeding it would maybe be the dressing room at Kohl’s. I had to actually go and grab a shirt and pretend that I was going to go and try it on. Those are the best places to breastfeed, dressing rooms.